Ramadi is the capital of Iraq’s Al Anbar province, only 120 km. down the road from Baghdad. 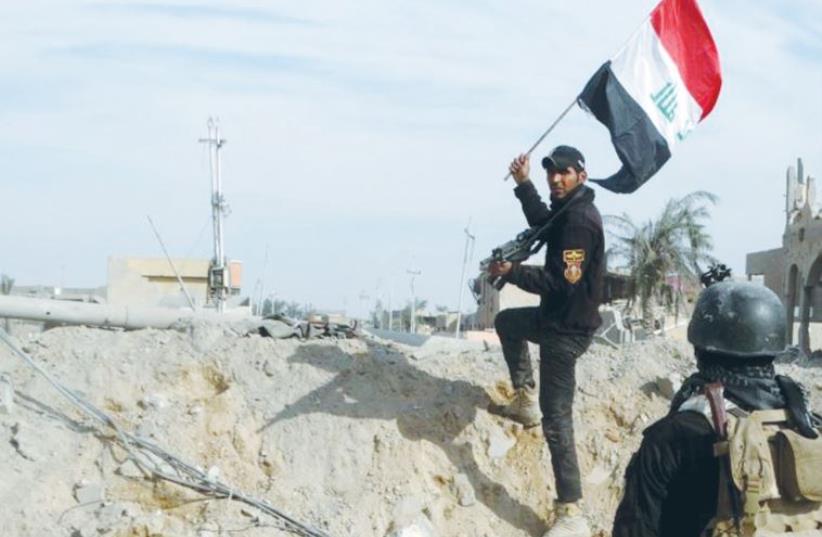 A MEMBER of Iraq’s security forces holds an Iraqi flag in Ramadi on Sunday
(photo credit: REUTERS)
Advertisement
WASHINGTON – Iraq raised its flag over a war-battered government complex in central Ramadi on Monday, declaring the city liberated of Islamic State control and its army strong enough to fight the terrorist organization at its Iraqi base in Mosul.The strategic victory is a rare advancement of the Iraqi armed forces, which retreated in droves from much of the territory that Islamic State raided in 2014 and now controls in its sovereign borders.Iraqi state television proudly displayed the hoisting of its flag as confirmation of the successful operation.But the broadcast also showed the fight is not completely over, with plumes of black smoke visible and gunfire audible in the background. Beyond statements from the Iraqi government and from its media outlets, few have claimed the city is fully liberated. And US military officials are cautioning that the battle may not yet be won.Ramadi is the capital of Iraq’s Al Anbar province, only 120 km. down the road from Baghdad.“Yes, the city of Ramadi has been liberated,” joint operations spokesman Brig.- Gen. Yahya Rasool said in a televised statement. “The Iraqi counter-terrorism forces have raised the Iraqi flag over the government complex.”In a televised address, Iraq’s prime minister, Haider al-Abadi, praised the mission that successfully “returned Ramadi to the bosom of Iraq.” He promised more military advances in the coming months.“2016 will be the year of the big and final victory, when Daesh’s presence in Iraq will be terminated,” he said, referring to the Arabic acronym for Islamic State.“We are coming to liberate Mosul, and it will be the fatal and final blow to Daesh.”The UN’s special envoy to Iraq also hailed the liberation as a sign “that terrorism can and will be defeated, and that Islamic State is steadily losing ground in Iraq due to the valiant efforts and sacrifices of the Iraqi Security Forces, Popular Mobilization Forces, peshmerga and the sons of the tribes.”In Washington, the Pentagon praised the “significant” development as “the result of many months of hard work.”US personnel continue to train Iraqi forces, and provided air cover for the Iraqi ground campaign against the extremist Sunni group.So, too, did the Royal Air Force, according to the UK Defense Ministry. “Armed reconnaissance missions and strikes by our Tornadoes, Typhoons and Reapers have made a vital contribution to the Ramadi offensive,” said British Defense Minister Michael Fallon.Iraqi authorities provided no immediate death toll from the battle for the city. They have said most residents were evacuated before the assault.Finance Minister Hoshiyar Zebari told Reuters the capture of Ramadi was “a done deal” but said the government had to do more to rebuild the city and encourage displaced people to return.“The most important thing is to secure it [Ramadi] because Daesh can bounce back,” he said in an interview in Baghdad.In a statement on Monday afternoon, the US-led coalition fighting Islamic State said the victory is a “milestone on the path to clear Da’esh from the historic city”— sidestepping claims by Baghdad that the city had been retaken.“The Coalition congratulates the Iraqi Security Forces for its success in Ramadi,” the statement reads. “The Iraqi Security Forces, including the Counter-Terrorism Service, the Iraqi Army, the Iraqi Air Force, the federal and local police, and the tribal fighters, have demonstrated their resolve.”Reuters contributed to this report.