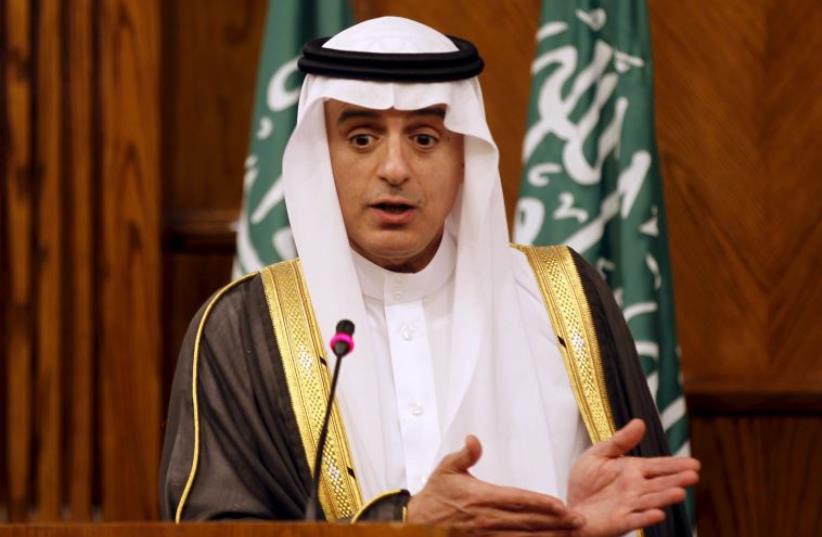 Saudi Foreign Minister Adel Al-Jubeir speaks during a news conference in Amman, Jordan
(photo credit: REUTERS)
Advertisement
Israel should keep its relations with Saudi Arabia as quiet as possible as it continues to explore other ways to improve relations, Prof. Joshua Teitelbaum, an expert on Saudi Arabia and the modern Middle East, told The Jerusalem Post.“Beyond facing a similar threat from nuclear threshold Iran, Israel and Saudi Arabia have been brought closer together by the Obama administration’s strategic decision to draw down its  involvement in the Middle East by seeking a strategic balance between Sunnis and Shiites,” said Teitelbaum.For the Obama administration, said Teitelbaum, who is an expert at Bar-Ilan University’s Begin-Sadat Center for Strategic Studies (BESA), there is little respect left for Saudi Arabia, which it sees as responsible, if indirectly, for 9/11 and Islamic State.“While Iran might support the terrorist Hezbollah and Bashar Assad, Sunni extremists have profited from Saudi support.”“In that case, the US seems to reason, better to have the Sunnis and Shiites rein each other in by equalizing them,” he continued, adding, “Riyadh and Jerusalem, however, view this as support for Iran, and at their expense.”It is worth exploring how flexible the Saudis can be regarding the Arab Peace Initiative (API), sponsored by Saudi Arabia and adopted by the Arab League in 2002, said Teitelbaum at a BESA seminar Tuesday on the subject of Israel-Saudi relations.“The API contains some aspects that we like,” he said, adding that Israel is trying to figure out “how much it is a take it or leave it deal.”“In the past it was take it or leave it, and it may still be, but the Arab League recently modified the API to accept the idea of land swaps,” explained Teitelbaum. “Further modifications might come about as a result of negotiations with Israel,” he added.In general, the Middle East expert supports a forward leaning Israeli negotiating stance regarding the Palestinian issue as it makes the country’s public diplomacy more effective. Israel needs to demonstrate more positively that it favors a two-state solution, even though one is not immediately attainable, he continued.There is a chance, stressed Teitelbaum, that if Israel shows the Saudis that it is serious on resolving the Palestinian issue, the present confluence of interests between the two countries with respect to Iran may be the basis for the Saudis to pressure the Palestinians to be more flexible.Even so, although the Saudis support the Palestinians with cash, their influence over the Palestinians is not absolute.By improving relations with Saudi Arabia, which controls the Islamic holy sanctuaries, said Teitelbaum, it also works to improve Israel’s relations with the larger Muslim world.Among many Muslims, Israel is a taboo subject, but improving relations with the Saudis could help tamper this attitude.There have been meetings between Dore Gold, a senior adviser to Netanyahu appointed director-general of Israel's foreign ministry, and retired Saudi general Anwar Eshki, an informal effort to see where the two countries' interests coincide, especially on Iran. They appeared together at a Washington conference in June, but took no questions.It is likely, Prof. Teitelbaum stated, that the two were also discussing how flexible the Saudis might be on the API.Teitelbaum says that Israel should do more of what Gold is doing, mentioning that the foreign ministry is also doing outreach to Gulf states on social media.However, he continued, for these efforts to succeed, such contacts should be kept away from the media. He criticized leaks about some of these meetings, which seem to be coming from the Israeli side.Reuters contributed to this report.