It will be the second year running that Istanbul's LGBT march, described in the past as the biggest in the Muslim world, has been blocked by city authorities. 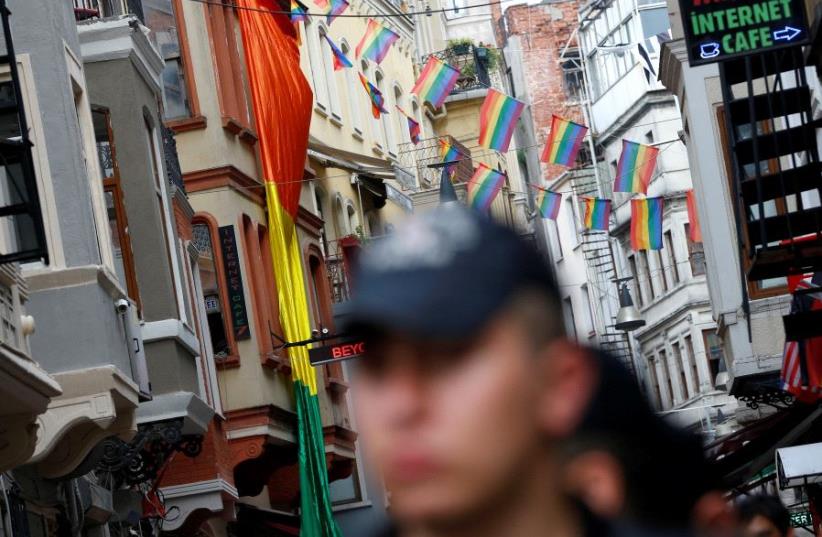 Riot police, with rainbow flags in the background, stands guard at the entrance of a street as LGBT rights activists try to gather for a pride parade, which was banned by the governorship, in Istanbul, Turkey, June 26, 2016
(photo credit: REUTERS/MURAD SEZER/FILE PHOTO)
Advertisement
ISTANBUL - Istanbul's governor has banned a gay and transgender pride march which was due to take place in the city on Sunday, citing security concerns after threats from an ultra-nationalist group.It will be the second year running that Istanbul's LGBT march, described in the past as the biggest in the Muslim world, has been blocked by city authorities.The ultra-nationalist Alperen Hearths group threatened last week to prevent the march if authorities did not act, and the governor's office said on Saturday that it took its decision out of concern for the security of marchers, tourists and residents.March organizers said the ban was effectively legitimizing what they called the hate crimes of groups like Alperen Hearths, and urged the governor to reverse the decision.The governor's emphasis on public order and safety was an effort to distort the image of a planned peaceful march, they said in an online statement headlined: "We are Marching, Get Used to It. We are Here, Not Going Away."The gay pride parade in Istanbul -- a city seen as a relative safe haven by members of the gay community from elsewhere in the Middle East, including refugees from Syria and Iraq -- has usually been a peaceful event.But two years ago police used tear gas and water cannon to disperse participants, after organizers said they had been refused permission because it coincided with the holy month of Ramadan.While homosexuality is not a crime in Turkey unlike many other Muslim countries, homophobia remains widespread. Critics say President Tayyip Erdogan and his Islamist-rooted AK Party have shown little interest in expanding rights for minorities, gays and women, and are intolerant of dissent.