Kerry proposed similar ideas with Abbas that he shared with Prime Minister Benjamin Netanyahu in Berlin on Thursday. 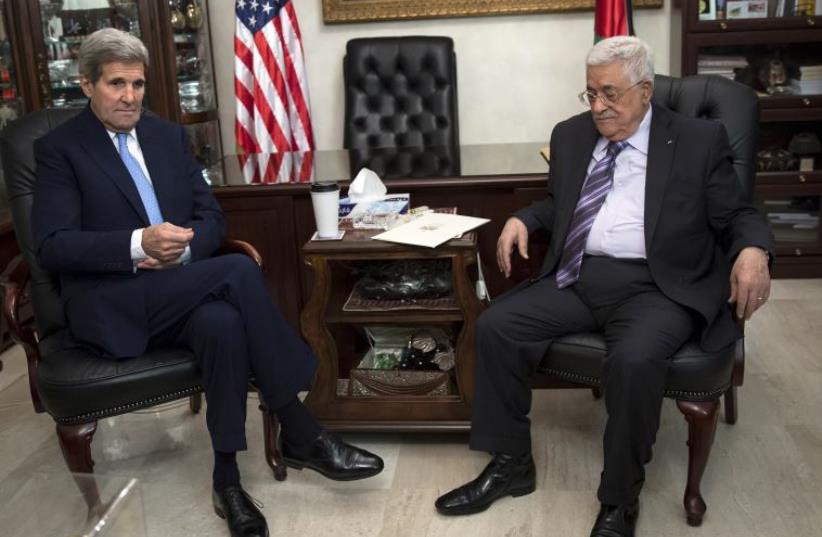 Kerry and Abbas meet in Amman, Jordan
(photo credit: REUTERS)
Advertisement
US Secretary of State John Kerry met Palestinian President Mahmoud Abbas and Jordan's King Abdullah in Amman on Saturday.The leaders are thought to have discussed rising escalation of violence between Israelis and Palestinians.The Palestinian Liberation Organization (PLO) Secretary General, Saeb Erekat, said after the meeting that the root of the escalating violence is the continuation of the Israeli occupation."President Abbas and Secretary Kerry had a very in depth, constructive meeting. The president began with the status quo in Al-Aqsa mosque, and in full cooperation with His Majesty King Abdullah II of Jordan I think Mr. Kerry got the message, I think the restoration of the status quo whereby Al Waqf will be the sole responsible for Al-Aqsa mosque is what will be discussed also today between His Majesty King Abdullah II and Mr. Kerry. Those who seek calm without tackling the real issue, the real issue is the continuation of the Israeli occupation," he said."We are a desolate people, with no planes or tanks or rockets. The perpetrator of war crimes and civilian executions on our people, and those who destroy our homes, and undergo collective punishment, is the Israeli side. We are a people defending ourselves. Israel is not defending itself, Israel is defending its occupation and its crimes and this is the truth. And those who seek calm must begin with ending the Israeli occupation, this is the root of evil. And whoever wants to defeat ISIL in the region, ideas are not killed by bullets, evil thoughts are destroyed by good thoughts," he added.Israeli-Palestinian strife has risen sharply in recent weeks as Arab states and Palestinians have accused Israeli forces of violations at Jerusalem's al-Aqsa mosque, one of Islam's holiest sites.Nine Israelis have been stabbed or shot dead by Palestinians along with dozens of wounded. Among the causes of the turmoil is Palestinians' anger at what they see as Jewish encroachment on the al-Aqsa mosque compound in Jerusalem's walled Old City. The compound is Islam's holiest site outside Saudi Arabia and is also revered by Jews as the location of two ancient Jewish temples.
.