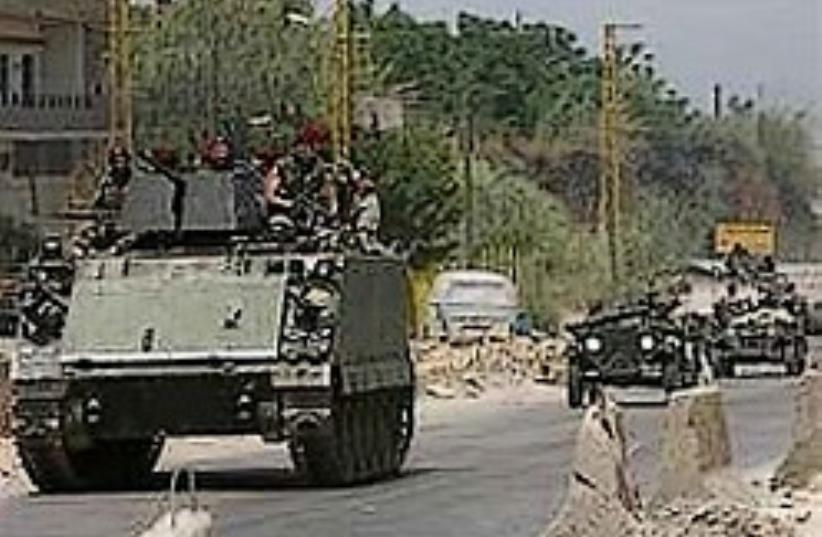 Lebanese Armed Forces troops on armored personnel
(photo credit: AP)
Advertisement
The Lebanese intelligence directorate arrested a high ranking army general a few days ago on suspicion of spying for Israel, Al Akhbar newspaper reported Tuesday.According to the report, the army decided not to make the announcement until after the 65th anniversary of the founding of the army, which took place last Sunday.RELATED:
Alleged spy 'flees to Germany'
'Israeli spy arrested in Lebanon'
Report: Israeli spy arrested in Lebanon
Hizbullah spy suspect revokes confessionThe name of the officer was not released. The arrest comes a day after a senior at the Lebanese communications company "Ogro" was arrested on charges of spying for Israel, according to a Lebanese newspaper As-Safir.Lebanese security officials reported that the 66-year-old is responsible for international communications at the company.According to the newspaper reports the suspect was arrested after he carried out a number of telephone conversations with Israeli authorities.A number of Lebanese army officials and communications workers have been arrested recently for their involvment in spying for Israel.Rasan al-Jud, was arrested two weeks ago on suspicion of aiding Israel with the help of employees at Alfa, the state-owned mobile telecom company.At least 35 suspects have been arrested since an investigation was launched into allegations of spying by Israeli agents inside Lebanon since April 2009.