Marines exit Iraq in first wave of US forces out

At their peak in October 2008, an estimated 25,000 Marines were in Iraq, mostly in the country's western Anbar province. Now only about 4,000 remain.

By ASSOCIATED PRESS
JANUARY 17, 2010 21:57
Petraeus 224.88
(photo credit: AP [file])
Advertisement
The base loudspeaker no longer wakes them up with calls for blood donors; armored trucks sit idle in neat rows. The US Marines who stood at some of the bloodiest turning points of the Iraq war are packing up and leaving.Among the first troops to invade in March 2003, and the first to help turn enemy insurgents into allies, the Marines will be the first major wave of American forces to go as the US military begins a withdrawal to be completed by the end of next year. For them, as for the rest of the US military, this has been the longest war since Vietnam.At their peak in October 2008, an estimated 25,000 Marines were in Iraq, mostly in the country's western Anbar province. Now only about 4,000 remain. They, too, will be gone shortly after the Marines officially hand over responsibility to the Army on Saturday."The security and stability that exists here is well within the means of the Iraqi security forces to maintain," Maj. Gen. Rick Tryon, the Marine commander in Iraq, said in a recent interview. "You don't need United States Marines to do this at this point. So it's time, and it's timely."Besides, he added: "Afghanistan is calling."The Pentagon already has deployed a Marine battalion to Afghanistan in a 30,000-troop buildup set to peak this summer.More than 40 percent of all deaths of coalition forces in Iraq between 2004 and 2006 were inflicted in Anbar, a vast mostly desert province stretching from the western outskirts of Baghdad to the borders of Syria, Jordan and Saudi Arabia. 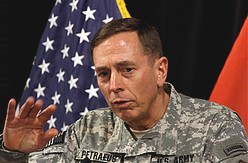 Command Sgt. Maj. Marvin Hill, center, points out a colleague to Gen. David Petraeus, left, the leading American general who oversees the wars in Iraq and Afghanistan, as Gen. Raymond Odierno, right, the top US commander in Iraq, looks on during a ceremony at al-Faw palace in Baghdad, Iraq.
Of the nearly 3,500 US troops killed so far in hostile action in Iraq, at least 851 were Marines.At the sprawling Marine base outside Al-Asad, 160 kilometers (100 miles) west of Baghdad, Master Sgt. Matthew Sewell recalls being awakened by the appeals for blood.As a severely wounded Marine was flown in by helicopter, "We'd go down there and stand in line, waiting to give blood," said Sewell, 26, of N. Ft. Myers, Florida. "You'd see 200 people standing in line. We'd all stand there until the guy was stabilized or we gave blood."Conditions in Anbar forced the Marines, whose traditional role is shock and assault, to fight in ways more suited to the Army - fixed areas of operation, occupation of territory. They were less well equipped for that at the start, initially lacking heavily armored vehicles.In the battles for control of the cities of Fallujah and Ramadi, the Marines saw some of the most brutal and deadliest fighting of the war.In 2004, they were ordered to take Fallujah, and their victory was one of the bloodiest since Vietnam. In Ramadi, they had a fixed position on the roof of the main government building which came under fire daily. At one point an al-Qaida front group declared Ramadi the capital of the Islamic State of Iraq.In 2005, 14 Marines were killed in Anbar when a huge roadside bomb destroyed their lightly armored vehicle.The killing of 24 Iraqi civilians in the town of Haditha in November 2005 cast a shadow over the Marines, eight of whom faced court-martial on murder charges. The charges were dismissed against six, one was acquitted and one has not yet been tried.Ramadi resident Mohammed al-Dulaimi said American troops in his city often overreacted."When they were targeted by roadside bombs or car bombs, they used to shoot randomly on nearby buildings and people," said al-Dulaimi. "They were really frightening. In normal circumstances, they were very respectful and gave gifts to children, but when an explosion took place, their treatment was altered."He did not know if the US troops he saw were Marines or from another branch of the military.Then, in 2006, came a turning point, beginning in Anbar: Sunni insurgents, fed up with al-Qaida attacks and threats, switched allegiance to American forces to create the so-called Awakening Councils - Iraqi security guards protecting their tribes and neighborhoods.Trained in part by Marines and other US forces, the councils have spread across the country, though the Anbar leaders are so proud of being the founders of the movement that they don't consider those in other parts of Iraq to truly be part of it."All of a sudden, instead of al-Qaida making an attack and the Iraqis kind of melting away, they stood," said Col. Jeff Slaterfield, who was involved with the strategy change. "And the Marines and (Army) armored soldiers stood right by them. They didn't have enough to do the job in equipment or training, but they had the will. And now, it's turned."The next turning point leading to Iraq's sharply reduced violence was the 20,000-troop US surge in early 2007, and over the last year, the Marines have been able to pull back from joint patrols and training missions with the Iraq security forces.Since then, they mostly have confined themselves to their bases, including at al-Asad.Much of Tryon's mission since taking over last February has focused on helping Anbar officials attract foreign investors and build up city services such as schools, hospitals and new roads and bridges.The Marine commander enjoys a close relationship with Qasim al-Fahadawi, the governor of Anbar, who was severely injured by a suicide bomber last month. The governor was airlifted to a US military hospital in Baghdad.Iraqi leaders in Anbar say they are eager to see the Marines go, but still have some demands."I am happy that the Americans will leave, but they still have to complete arming the Iraqi army," Anbar tribal chief Sheik Hameed al-Ghadhban said. "They have some unfinished jobs to do, and the Iraqi army needs arms and equipment - they must supply us with them."Overall, al-Ghadhban said, the US troops in Anbar "helped us, though not to the satisfactory level."The departure is a daunting logistical challenge. More than 382,000 trucks, radios, weapons and other equipment have had to be checked, packed and shipped - either back to the US or to Afghanistan. By the end of December, 15,324 pieces of equipment were left, said Col. Jim Clark, who is overseeing the process.Combat troops were in Vietnam from 1965 to 1971, and the first in were Marines. They have been in Iraq from March 2003 until now, except between mid-2003 and early 2004 when it was assumed the war was nearing its end.According to Maj. David Nevers, a Marines spokesman, the Iraq invasion - from Kuwait northward to Baghdad and eventually west to Anbar - was the most ground Marines have covered since their 1805 desert march across Egypt to what is today the republic of Libya - a feat recognized in the reference to "the shores of Tripoli" in the Marines Corps anthem.Aside from US Embassy guards or command staff advisers in Baghdad, Col. Scott Aiken will be the last combat Marine in Iraq. He is the designated commander of a skeleton crew that will remain at al-Asad for about six weeks after the official handover on Saturday to make sure everything is done."Getting people to go home is the easy part," Aiken said. "But getting them to go home correctly takes a little more finessing. You only have one time to do it right."
Advertisement
Subscribe for our daily newsletter