Military action may be only way to stop Iran, former Trump official says

Elliott Abrams said that going back to the JCPOA in 2021 is not a simple prospect.

By MAAYAN JAFFE-HOFFMAN
Servants of the holy shrine of Imam Reza carry the coffin of Iranian nuclear scientist Mohsen Fakhrizadeh, in Mashhad, Iran November 29, 2020.
(photo credit: REUTERS)
Advertisement
If Iran is “absolutely determined” to develop a nuclear weapon, the only way to stop the rogue regime may be militarily, according to Elliott Abrams.
If that assumption is correct, then “ultimately Israel and the United States will have to face that.” 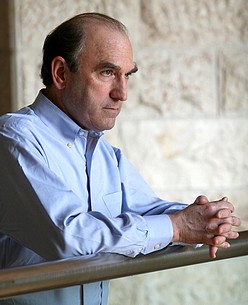