Obama: Our expectations of Mideast progress were 'too high'

In 'Time' interview, US president says Israel took a long time to change policies and that PA's Abbas has "got Hamas looking over his shoulder."

By JPOST.COM STAFF
JANUARY 21, 2010 19:37
obama 311.187
(photo credit: AP)
Advertisement
Getting the Israelis and Palestinians to agree tonegotiate, or even to agree to the framework in which negotiations willtake place, "is just really hard," US President Barack Obama said in aninterview with Time magazine published Thursday, as the president was completing his first year in office. 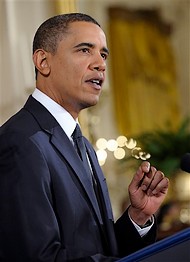 Obamaadmitted that the administration "overestimated our ability to persuade[both sides] to [negotiate] when their politics ran contrary to that.Both sides - the Israelis and the Palestinians - have found that thepolitical environment, the nature of their coalitions or the divisionswithin their societies, were such that it was very hard for them tostart engaging in a meaningful conversation," Obama told the magazine.
The president also chose to emphasize the Palestinians' angle,where Palestinian Authority President Mahmoud Abbas has "got Hamaslooking over his shoulder and, I think, an environment generally withinthe Arab world that feels impatient with any process."
Obama said that Israel, "after a lot of time," showedwillingness to "make some modifications in their policies," but "stillfound it very hard to move with any bold gestures."
In the interview, which covered a vast range oftopics from internal issues like health care to foreign policyregarding North Korea, Obama said that if he would have anticipated theissues early on, "we might not have raised expectations as high."
Advertisement
Subscribe for our daily newsletter