Lack of education, employment opportunities leaves 87% of Arab women out of the labor market. 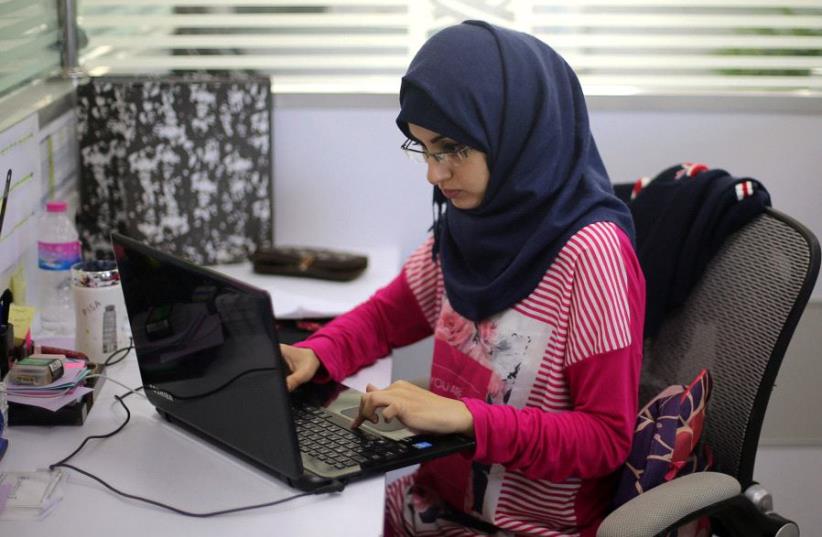 Palestinian entrepreneur Samar Hijjo, who developed the mobile application ''Baby Sitter"
(photo credit: REUTERS)
Advertisement
A report released Sunday by the independent Workers Advice Center found that Palestinian women living in east Jerusalem are overwhelmingly absent from the capital’s labor force, with few viable prospects of meaningful integration.Erez Wagner, the report’s author, stated that the unprecedented findings present “a picture of extreme poverty stemming largely from the absence of women in east Jerusalem from the labor market.”“The lack of opportunities has resulted in a situation where only 13% of working-age women (ages 15-64) have managed to enter the labor market, a state of affairs that perpetuates their low social status,” he said.“We believe that the integration of Palestinian women in the labor market is a basic condition for empowering them to lift themselves and their families out of poverty, significantly improving conditions in the city.”Wagner noted that the center published the findings “to contribute to the knowledge of civil-society organizations, and to find partners for changing the situation.”According to the report’s summary, 315,900 Palestinians – roughly half female – live in east Jerusalem, with the average employment rate among women over the last decade averaging 12-13%.Between 2008 and 2014, poverty rates increased from 65% to 82%; among families of five with a single working member, poverty rose from 66% to 89%, the report states.“To get a decent job in a modern economy, one needs an education beyond high-school,” it continued.“However, because of the underdeveloped educational system in east Jerusalem, the vast majority of its women will not come close to that.”Indeed, the report concluded that 70% of working-age women living in the eastern sector of the capital do not have more than a high-school education, forcing the small percentage who do find employment to accept hard physical labor under abusive conditions.“Apart from the sheer humiliation, such work perpetuates their entrapment in the poverty cycle,” the report states. “Even among jobs in the educational system, health [services], and care of the elderly, we find deeply entrenched practices of abusive employment.”Nonetheless, the Workers Advice Center’s field work, buttressed by research from other women’s groups, found a growing tendency among east Jerusalem women “to fight to enter the labor market.”A case in point is the Rayan Employment Center in east Jerusalem’s Shuafat neighborhood, where 750 out of the 1,000 registered to find work are women, with only 26% succeeding.In addition to a weak educational system and dearth of opportunities, the report cited numerous obstacles women face, including a chronic lack of daycare centers for their small children; living far from public transportation; Israel’s separation barrier cutting off a third of the population from the rest of the city; and insufficient Hebrew.Despite the grim picture, the report identified various “dynamics for change,” including the recent emergence of female labor activists, as well as labor groups to support them.Still, Wagner said meaningful change cannot be realized without a better educational infrastructure, a more accessible job market with fair conditions, and solutions for childcare.“Given the strong will of the women, such actions could revolutionize life for the better in east Jerusalem,” he said.“We hope that [the report’s findings] will influence officials in the municipality, the government, and the Knesset to take the needed measures.”