By JPOST.COM STAFF
FEBRUARY 19, 2014 14:18
US and Israeli relations
(photo credit: REUTERS)
Advertisement
The American public has apparently not received the BDS memo that Israel needs to be boycotted and isolated, as 72 percent of the US public said in a Gallup poll that they have a very favorable or mostly favorable view of the Jewish state.According to the poll, released Tuesday, only 19% of Americans have a favorable view of the Palestinian Authority.The favorable opinion of Israel far outstripped the opinion the American public has of the seven other Mideast countries and the Palestinian Authority that were mentioned in the survey.. 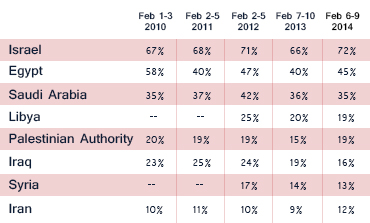 Courtesy GallupAfter Israel, Egypt was the second most favorable country, with 45% having a positive view.Egypt was followed by long time US ally Saudi Arabia, with a 35% favorable rating, and then Libya, the PA, Iraq, Syria, and Iran with 12%.That, from Israel’s point of view, is the good news.The bad news is that American youth do not have as favorable a view of Israel as their parents. 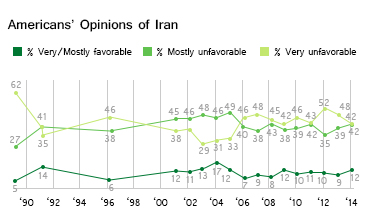 Among Americans 55 and older, some 81% view Israel in a favorable light. That number drops to 64% for those aged 18-34.Among people aged 35-54, Israel’s favorable rating is 72%.By contrast, the PA is viewed favorably by 24% of the youth, and by 16% of Americans 55 and above.The generation difference relating to Israel was the greatest of any of those countries polled.The poll was conducted by telephone from February 6-9 among a random sample of 1,023 adults. It has a ±4% margin of error.