According to the US State Department’s new Human Rights report, “LGBT persons [in Iran] practiced self-imposed exile to express their beliefs freely or escape government harassment.” 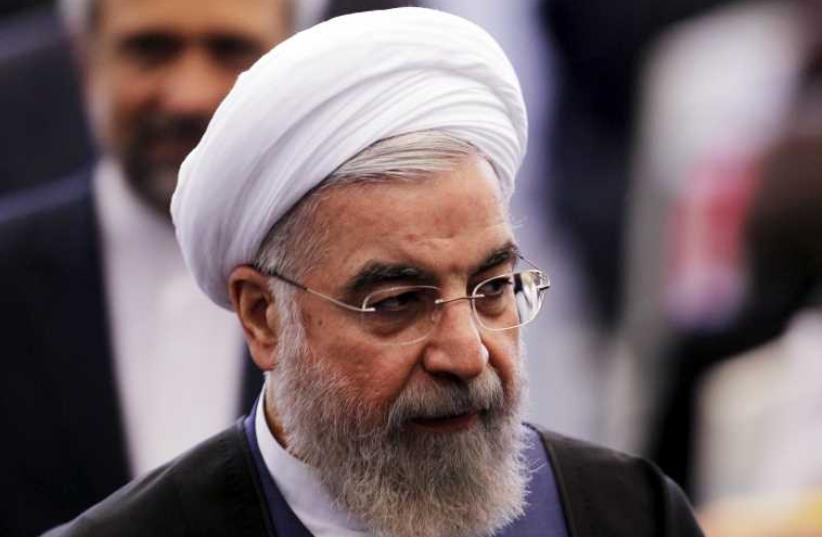 Iranian President Hassan Rouhani
(photo credit: REUTERS)
Advertisement
Shortly after the election of Iran’s self-described moderate cleric Hassan Rouhani as president in 2013, the gay Iranian poet Payam Feili concluded, prophetically and pessimistically: “Nothing essential has changed. The structure is still the same. It’s a play, a comic and ugly performance. They’re relying on the naïveté of people to be able to succeed.”In short, Rouhani’s anti-gay policies mirror those of his fiercely lethal homophobic predecessor, Mahmoud Ahmadinejad.To fix Feili’s point inextricably in the forefront of debates about the Islamic Republic’s alleged moderation, all it is necessary to know is that the state-controlled Press TV reported on Saturday that an Iranian actor had to apologize because of his progay tweet.Bahram Radan, the so-called Iranian Brad Pitt, had tweeted last week, “The US Supreme Court’s ruling that same-sex marriage is legal was historic, perhaps on the scale of the end of slavery... from Lincoln to Obama.”

The Guardian reported, “But within a few hours, after many users bombarded him with homophobic abuse and hard-line media criticized him, Radan deleted the tweet.”Contrary to Rouhani’s pre-election promise that “All Iranian people should feel there is justice,” and his declaration, “Long live citizen rights!” Iranian gays face death, including by flogging, as a punishment enshrined in the country’s Islamic law.The incorrigibly reactionary Keyhan daily, a paper widely viewed as the voice of Supreme Leader Ali Khamenei, urged that Radan be stripped of his acting career and carted off to the Ministry of Culture and Islamic Guidance for interrogation, according to the Guardian.Under rising pressure to reject his pro-gay Tweet, Radan wrote on Thursday: “What was published on the Internet as my opinion about the US Supreme Court’s ruling on gay marriage was a mistake and beneath the dignity of the Iranian people, for which I apologize.”He added, “We’re living in a country which celebrates marriage as a tradition of the prophet [Muhammad] and a commendable practice. American laws do not apply to the Islamic Republic.”Radan added that gay marriage is “reprehensible,” Press TV reported.One measure of how popular Radan is – he has over 900,000 followers on Instagram.Apologists for the regime in the West will argue one can’t expect that Iran abolish its lethal homophobia straight away. The extreme cultural relativists will chalk up Iran’s Shari’a law as merely another system among many forms of social organization.The bottomless pit of social relativity was perhaps best captured by Germany’s former and first out gay foreign minister, Guido Westerwelle, in 2010. He justified his decision to not have his husband, Michael Mronz, accompany him on a trip to Saudi Arabia by saying “We want to encourage the idea of tolerance around the world, but we don’t want to achieve the opposite either by acting imprudently.”Saudi Arabia’s regime, like the Islamic Republic of Iran, prescribes the death penalty for male same-sex relations. Predictably, Westerwelle also chose not to bring Mronz on his trip to Iran during his tenure as foreign minister. Many European leaders and intellectuals take a similarly craven approach to Islamic intolerance.According to the US State Department’s new Human Rights report, “LGBT persons [in Iran] practiced self-imposed exile to express their beliefs freely or escape government harassment.”Moreover, the State Department wrote, “The law [in Iran] defines transgender persons as mentally ill,” and, “Human rights activists and NGOs reported that some LGBT persons were advised to undergo gender-confirmation surgery to avoid legal and social consequences due to their gender- identity ambiguity.”Iran provides funds for people for gender transition related-surgery.While the world powers inch toward a nuclear agreement with Iran over its illicit nuclear weapons program, the plight of persecuted LGBT community remains unchanged. Rouhani’s misleading election rhetoric proved to be nonsense on stilts.Europe’s silence on Iran continued crackdown on LGBTs perhaps can best be explained by France, Britain and Germany not wanting to disrupt the nuclear talks because the negotiations are focused on managing Tehran’s nuclear program. The floodgates to Iran’s business sector will soon open for European firms. Hence another reason for the ongoing silence.Feili, the poet, who lives in Kermanshah, in western Iran, explained Rouhani’s deceptive behavior as being directed toward the naiveté of many of his countrymen; the same cannot be said about a cynical Europe, especially in a soon to be post-Iran-nucleardeal world.

Benjamin Weinthal reports on the LGBT communities in the Middle East, and is a fellow for Foundation for Defense of Democracies.
Advertisement
Subscribe for our daily newsletter