By JPOST.COM STAFF
FEBRUARY 24, 2011 09:36
marj as sultan reactor syria_311
(photo credit: DigitalGlobe - ISIS)
Advertisement
Syria is suspected of harboring a uranium conversion reactor near the town of Marj as Sultan, near Damascus, according to a publication released Wednesday by the Washington-based Institute for Science and International Security based on reports by the German newspaper Sueddeutsche Zeitung. The facility is related to the nuclear reactor project at al Kibar that was bombed by Israel in September 2007, and it was reportedly used for processing uranium, according to the report. RELATED:
Iranian warships enter Suez Canal en route to Syria
IAEA head affirms Iran 'steadily' enriching uraniumThe report said the facility's operational status is still unknown, but Syria is suspected of clearing out the buildings before mid-2008 in efforts to disguise previous activities conducted at the site.Syria has contined to refuse requests by the International Atomic Energy Agency (IAEA) to inspect the Marj as Sultan facility, as well as other sites that may be related to the nuclear reactor project, the report said. Satellite images of the site near Marj as Sultan, obtained by the ISIS, reveal that on July 25, 2008, there was considerable activity involving the pouring of material on the ground as well as trucks and other vehicles that could have been related to the operation. 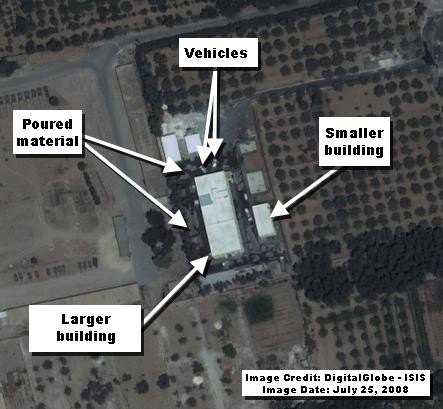 The ISIS document said this could have been part of a plan to lay down concrete or asphalt, which could be "an attempt to defeat the environmental sampling that IAEA inspectors would likely carry out to see if uranium was present in the event of a visit to these suspect sites."The ISIS document cites information from Sueddeutsche Zeitung revealing that among the equipment kept inside two buildings near the Marj as Sultan site, there was a scrubber, two cyclone separators, large diameter pipes, a manifold, reaction vessels made from stainless steel, and storage tanks. This equipment is in line with "what would be expected in a small uranium conversion facility," the ISIS report said.
Advertisement
Subscribe for our daily newsletter