"You can’t expect children who experienced extreme violence for it to not have permanent psychological damage,” says Caryl Stern. 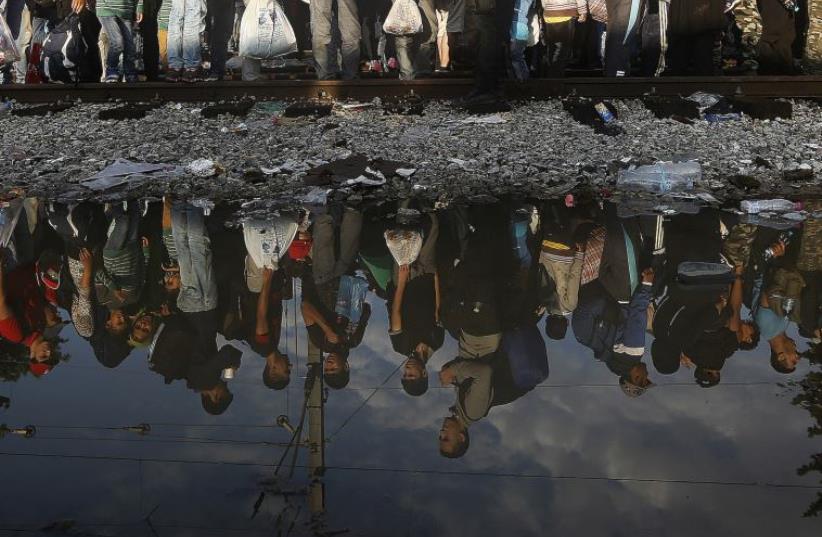 Syrian refugees are reflected in a puddle as they wait for their turn to enter Macedonia at Greece's border
(photo credit: REUTERS)
Advertisement
For the child of Holocaust survivors, witnessing the refugee crisis in Syria can be especially difficult and personal, and perhaps drive home the realization that the past is never really past.“In 1939, when my mother was six, she was evacuated with her four-year-old brother from Vienna.They came [to the US] with a friend of the family who sponsored housing. They lived in an orphanage on the Lower East Side [of New York] but she at least had an option because people would take her in. It’s very hard to reconcile the world’s response [to Syria],” said Caryl Stern, president & CEO of the US Fund for UNICEF, the US NGO that supports UNICEF, during a short visit to Israel last week.Though she’s seen her share of human and natural disasters, Stern said there’s something about Syria that makes it worse.“I was in Haiti after the earthquake and in Kenya for the famine, but part of what makes this horrific is because this is man-made,” Stern said, arguing that there is more the world can do to help Syrian refugees and the countries absorbing them.Stern was in the region to observe the refugee situation in Jordan and meet with UNICEF staff in Israel.In Jordan, last week, she said she was able to see the progress made in the year and a half since she was last at the massive Zaatari refugee camp, but called the situation far from ideal.“There’s been a lot of progress, but the despair is still there.”It’s the personal stories that can be the hardest, she said, mentioning that of a Syrian mother who escaped to Jordan with her children but whose husband was left behind. Stern said the woman’s son later went back to Syria to try to find his father and now cannot return because the border is closed. It is just one of countless stories of family suffering caused by one of the greatest humanitarian crises in history.Today there are around 80,000 people in Zaatari – half of them children – living in what is in many ways a city of sorts with its own internal governing structure, schools, health facilities and grocery stores.Despite its improvements, Stern said it is remains a refugee camp and, therefore, is full of people who left their homes against their will. Furthermore, the population is far greater than the 20,000 that is often considered the maximum for a refugee camp.Although housing in shipping containers has been provided, there is great boredom for the adults who are prevented by Jordanian authorities from working.And, with children making up about half of the camp’s population of the camp, a central concern is creating “child-friendly spaces” where, as she puts it, “a kid can be a kid,” as well as one-on-one counseling for children who have been through great trauma.“Only about half of the kids in Zaatari are going to school and many have been through trauma. You can’t expect children who experienced extreme violence for it to not have permanent psychological damage,” she said.UNICEF is a United Nations humanitarian and development agency that works to protect children’s rights and provide shelter, nutrition, health care and education for children and mothers.Asked about the “Stabbing Intifada” and high number of juvenile offenders who have carried attacks – including some as young as 12 – Stern said her experience indicates that there are often mental changes that take place in children who have witnessed violence, and patterns that are learned, which often help create children who are violent offenders as juveniles or later as adults.Nonetheless, she said her experience has taught her that even though it can be a difficult process it is possible to rehabilitate children who are perpetrators of violence, and that they can become productive adults.When asked if she thinks children who carry out attacks do so for political or ideological reasons, she was skeptical, saying “I’m not sure they’re thinking politics and conflict but they’re living in a world where their options have been limited and they’re experiencing the frustrations of the adults around them.”Just a couple days after Stern spoke to The Jerusalem Post, two 13-year-old Arab girls from Ramle were arrested for stabbing a security guard at the city’s bus station in what police said was a terrorist attack, and two Jewish minors were sentenced to 21 years and life, respectively, for their roles in the kidnapping and murder of a Palestinian teen in the summer of 2014.Stern previously spent 27 years in nonprofit work, including as the chief operating officer and senior associate national director of the Anti-Defamation League, and a host of other nonprofit roles including with the Center for Disaster Philanthropy, the United Nations International School, Mercy College and the Martin Luther King Memorial Foundation.As an “openly Zionist” daughter of Holocaust survivors – most of whose family was murdered by the Nazis – she said she at first had some concerns about working for the United Nations, which often has the image of being hostile to Israel, but she said that never once has she been treated differently for being Jewish nor has she hidden her pro-Israel sentiments – although, initially, she was cautious.She said she took her concerns to then Israeli ambassador to the UN, Dan Gillerman, who set her mind at ease.“I asked him how he works here, and his answer to me is why I do the job. He told me: ‘With my head held high.’”