By JPOST.COM STAFF, REUTERS
MAY 11, 2013 07:43
John kerry open arms 370
(photo credit: REUTERS)
Advertisement
Secretary of State John Kerry attempted to tamper his views on the likelihood of Syria's use of chemical weapons with his belief that a peaceful resolution is possible in the Syria crisis, during a Google+ Hangout on Friday afternoon."We owe it to the world to try and get there and to explore in good faith whether or not we can avoid the bloodshed, avoid the violence," Kerry said.While confessing his belief that there is "strong evidence" that Syrian President Bashar Assad has used chemical weapons, Kerry pressed the importance for talks, as difficult as they may seem at the current moment."It's not an easy path, but it is a path I think we, as a matter of conscience, are obligated to go down," Kerry said. 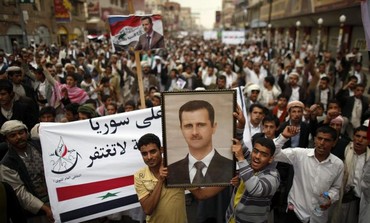 Anti-government Shiite protesters hold a poster of Assad.US President Barack Obama has said that the use of chemical weapons in Syria would represent the crossing of a red line, insinuating that the US will take action if it determines that chemical weapons have been used.Turkish Foreign Minister Ahmet Davutoglu said on Friday that Syrian casualties treated in Turkey show signs of being victims of chemical weapons.Wary of the false intelligence used to justify the 2003 war in Iraq, the United States says it wants proof that chemical weapons have been used before taking any action in Syria.But if the evidence is confirmed it would increase the possibility of Western intervention against Assad to stop the two-year civil war, even as the United States and Russia try to bring the sides to peace talks.Turkey confirmed last week it was testing blood samples from Syrian casualties brought over the border to determine whether they had suffered a chemical weapons attack."We have been making tests and we have some indications regarding chemical weapons being used, but in order to make sure and verify we are continuing these tests and will be sharing these tests with UN agencies," Foreign Minister Ahmet Davutoglu said in the Jordanian capital Amman on Friday."We know the Syrian regime has stocks .. And everybody knows the Syrian regime has this capacity," Davutoglu said. "Of course this has been one of our major concerns because chemical weapons are a threat against humanity and a crime."
Advertisement
Subscribe for our daily newsletter