'Druse worries over Syrian brethren could be exaggerated' 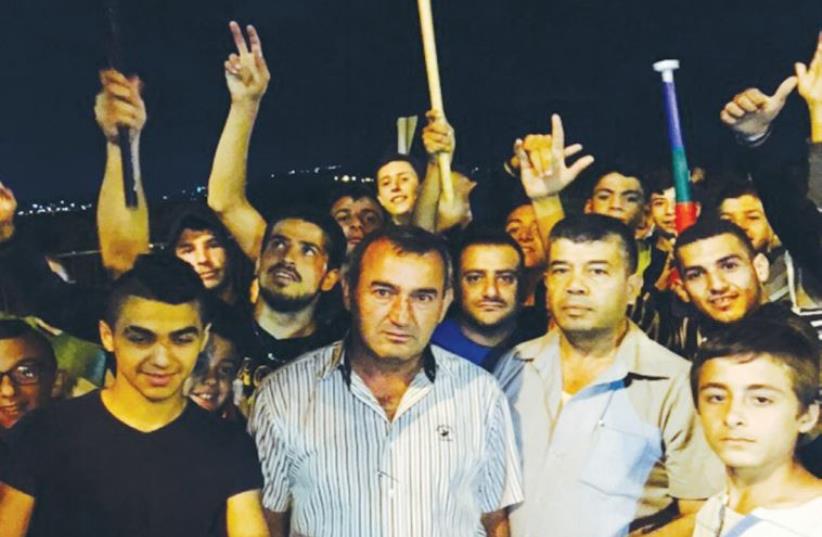 JABER HAMOUD (second left), head of the Druse and Circassian Local Councils Forum, protests in Sajur Sunday.
(photo credit: SOHEL MUSTAFA)
Advertisement
The Druse community is worried about its brethren in Syria and the world needs to prevent a massacre, an Israeli Druse leader told The Jerusalem Post on Sunday.“We are worried and ask for the whole free world to prevent a massacre of the Druse in Syria,” said Jaber Hamoud, the head of the Druse and Circassian Local Councils Forum. “We expect that the world will not stand by and not act to defend the Druse.”Twenty Druse villagers were reportedly killed in the village of Qalb Loze in Idlib province on Wednesday when Nusra Front members opened fire in an incident that spiraled from their attempt to confiscate a house.“Druse seek peace,” Hamoud said, adding that their Syrian brothers have accepted refugees from various ethnic groups into their areas.Mendi Safadi, a Druse who in the past served as Deputy Regional Cooperation Minister Ayoub Kara’s chief of staff, told the Post that many Druse and Israelis are getting all of their information on the situation from the media and Facebook.“Because of this, they think that the situation for the Druse in Syria is more dangerous than it really is,” said Safadi, who has traveled in the region and met with Syrian opposition activists.“I am aware about what is happening there from my sources there,” he said, adding that he sent a message to the Nusra Front rebels that “if they try to do the same thing to the Druse that Islamic State did to the Yazidis, we [the Druse] will destroy them.”On Saturday night, thousands of Israeli Druse in the North protested the slaughter of their kin by the al-Qaida-linked rebels in Syria.Hamoud called for an urgent convening of senior Israeli officials to assess the situation and help avert a “Druse holocaust.”“We are in immediate danger, without reason. Therefore, we call on all leaders, including our Muslim brothers, to unite in joining our call for all factions in Syria to stop the massacre of Druse and others,” he stressed.“Who more than the Jewish people should understand what we are going through these days, as a minority in the world?” Hamoud added.Druse in Israel have been lobbying for arms to be sent to Syria, a US official has said. Lebanese Druse politicians aligned with the Syrian government have also called for the arming of their brethren in Syria.Members of Syria’s Druse minority have helped repel a rebel attack on an army base in the south of the country, mobilizing to confront insurgents including al-Qaida’s Nusra Front who are trying to build on gains against President Bashar Assad.A Druse leader from Sweida city said young men from there had helped recapture the disused al-Thala airbase last week.A rebel leader confirmed that the government side had sent reinforcements to the base.The Druse community, which is spread across the Levant, practices a religion viewed as heretical by the puritanical brand of Sunni Islam espoused by al-Qaida and Islamic State, the two most powerful opposition groups in Syria.The Nusra Front acknowledged on Saturday that its members were involved in the killing of Druse villagers in northwestern Syria last week, saying they had violated orders and would face justice.The Nusra Front said it had received with “great sorrow” news of the incident in which “a number of Nusra Front members” had taken part without consulting their leaders.“Everyone involved in this incident will be presented to a Shari’a court and held to account for blood proven to have been spilled,” it said.The statement was circulated on a Nusra Front-affiliated Twitter feed. It did not give a casualty toll or describe what had happened in the incident.The shootings have triggered statements of concern for the Druse in Syria, including in the south where groups including the Nusra Front and Islamic State have been trying to advance toward Sweida province, a Druse stronghold.The Nusra Front said it had sent delegations to the village to investigate the incident and to reassure the people that it happened without the leadership’s knowledge and that they remained safe in areas held by Nusra Front.

Karine Rozkovsky contributed to this report.