Sari's case highlights what activists say is a rise in human trafficking cases since Indonesia in 2015 banned women from going to 21 Middle Eastern countries. 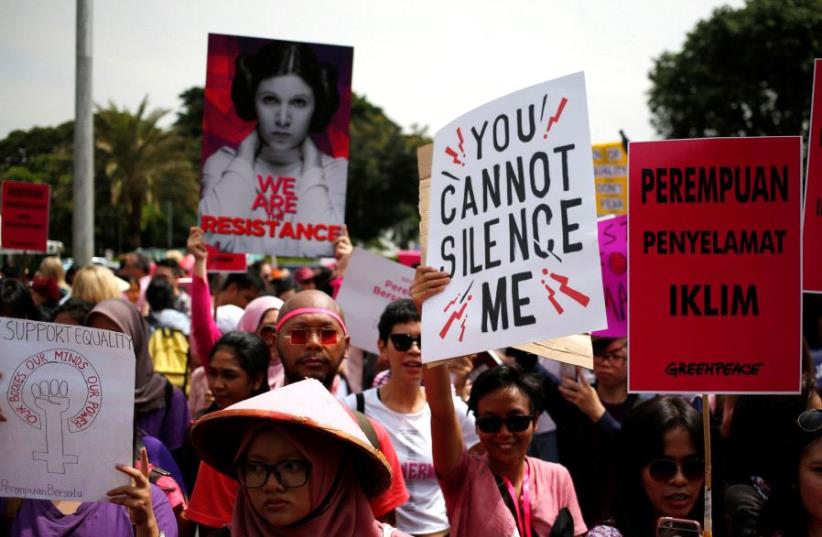 People take part in a rally calling for women's rights and equality ahead of International Women's Day in Jakarta, Indonesia, March 4, 2017
(photo credit: REUTERS)
Advertisement
JAKARTA - Dian Permata Sari was determined to escape when she was brought to the maid recruitment office in Saudi Arabia for the sixth time and paraded in front of potential employers alongside 14 other women."We were made to stand in a line while the employers pick the maid they like, it was like shopping for goods," said the 19-year-old Indonesian woman.Lured by an agent's promise of earning 1,500 riyal ($400) a month working as an office cleaner, Sari agreed in November to leave behind her husband and two-year-old son to travel to Saudi Arabia.It was only when she arrived that Sari found out she had been brought there to become a domestic helper. She was forced to stay in a crowded dorm with hundreds of others, with no job or salary, until she was finally rescued last month.Sari's case highlights what activists say is a rise in human trafficking cases since Indonesia in 2015 banned women from going to 21 Middle Eastern countries, including Saudi Arabia, to become domestic helpers.The ban was imposed following a string of abuse cases, but high demand in the oil-rich kingdom has encouraged traffickers to find ways around the curbs.Traffickers are increasingly using different tactics, such as sending women on the pretext of becoming office cleaners, changing flight routes to avoid suspicion from authorities or paying off their family, rights groups say.The Indonesian government says the ban was introduced to protect its citizens, but campaigners say the law leaves migrant workers at greater risk of trafficking.

BEATEN UP WITH WATER PIPE

Maids make up more than a third of the 6 million Indonesians working abroad. Cases of abuse and near slave-like living conditions are common.With no previous work experience, Sari jumped at the chance to become an office cleaner in Riyadh after she met an agent.The agent flew Sari first from her hometown on the holiday island of Lombok to the Indonesian city of Surabaya. From there she caught a flight to Singapore before going to Riyadh.As soon as she arrived, she was sent to the dorm with 400 other women, and her mobile phone was confiscated.Often the women were only given a pack of instant noodles to eat for a whole day, and a small bottle of water shared among 15 people."I protested with other women but we were beaten up with a water pipe," Sari told the Thomson Reuters Foundation at a government-run shelter in Jakarta, where she is undergoing counseling before returning home.After two months, Sari managed to contact her husband using a mobile phone that she had kept hidden.He got in touch with local migrant groups and Sari was eventually rescued by diplomats from the Indonesian embassy in Riyadh.Other Indonesian women tell similar stories.Hatmiati, 25, who was rescued together with Sari, said an agent had promised she would be sent to Singapore to be a cleaner."I packed my belongings and flew from Lombok to Jakarta – it was only after I arrived at the agent's office that they said there was no job for me in Singapore," said the woman, who goes by one name.CASH PAYMENT TO FAMILYBoth women said they were unaware of the government's ban on sending maids to the Middle East and that their agents had not warned them of the consequences of breaking the laws.Sari and Hatmiati said their families were offered 2 million rupiah ($150) and 2.5 million rupiah respectively by the agents in return for the women agreeing to go to the Middle East.Mulyadi from rights group Migrant Care, which has assisted Sari and Hatmiati's families, urged Indonesia to review the ban."The government should re-evaluate the ban as it violates a person's fundamental rights to seek employment overseas," said Mulyadi, a co-founder of the group.He warned that a government plan to stop sending women overseas to work as domestic helpers in any country from this year would make the situation worse.Indonesian's Manpower Ministry senior official Soes Hindharno told the Thomson Reuters Foundation his ministry was working with other agencies to crack down on trafficking.Calls to the Saudi embassy in Jakarta went unanswered.Now that her ordeal is over, Sari is looking forward to being reunited with her family."My husband is a farmer, I just wanted to find a job to help him get some extra income, help our family," she said."I did not expect this to happen."