The combination of an impulsive personality, big stick and dramatic change of Middle East policy may turn out to be highly potent. 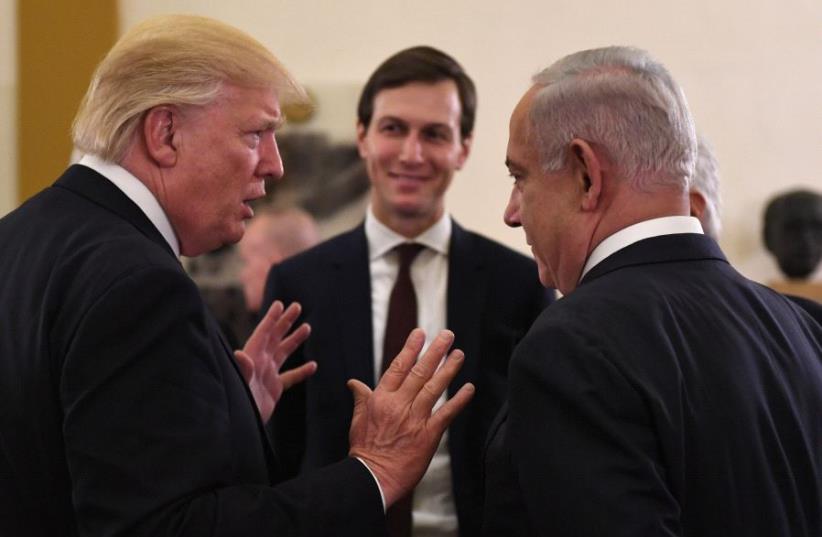 Donald Trump, Benjamin Netanyahu and Jared Kushner at the King David Hotel, May 22 2017.
(photo credit: GPO)
Advertisement
In contrast to President DonaldTrump’s policies in Europe, which have led to crises and distrust with European leaders, his policies in the Middle East have consolidated partial cooperation and support. Paraphrasing Teddy Roosevelt’s “big stick” motto, Trump’s policies can be described as: “carry a big stick, and be unpredictable.” Force and impulsiveness, which have infuriated Germany’s Angela Merkel and France’s Emmanuel Macron, do not seem to rub Egypt’s Abd Fatah al-Sisi, Saudi Arabia’s King Salman or Israel’s Benjamin Netanyahu, the wrong way.Despite the occasional mistake, Trump’s administration seems to be building clout in certain areas of the Middle East, in particular among Israelis and Palestinians.American leverage over the Israelis and Palestinians is not new. What is new is Trump’s unpredictability. Foreign leaders and American officials do not know if, when, and with what force Trump will decide to act. His tweets on Qatar and Saudi Arabia are evidence to his ability to confound one and all. In Europe such conduct is a liability, however, in the Middle East it is arousing very different reactions.Yet leverage and unpredictability are not Trump’s strongest cards. At present, his greatest asset is the renewed aura of honest broker in the context of the Arab-Israeli conflict. Trump appealed to Palestinians when he invited PA President Abbas to the White House, engaged a host of Arab leaders, and sent his special representative, Jason Greenblatt, on a regional trip that included broad outreach to Israeli, Jordanian, and Palestinian constituencies. Most recently, he won a shower of accolades from the Palestinians when he signed the presidential waiver to postpone the transfer the United States embassy from Tel Aviv to Jerusalem. Not the least of these compliments was a remark by Mohammad Shtayyeh, a high ranking Abbas aide, that Trump earned the Palestinian’s confidence with this decision.Concomitantly, he received applause and earned a certain level of trust among Israelis with his right-wing rhetoric, appointment of an ambassador who has raised money for settlements, and animosity towards Netanyahu’s nemesis -- President Obama.In congress, Greenblatt, who arrived in the country on Monday, is working on building bi-partisan support for Trump’s “Ultimate Deal”.It will be interesting to see how Republicans whom have adopted hawkish positions towards the Palestinians, and Democrats who harbor extreme antagonism towards Trump, will react to Trump’s peace initiative.Trump has a well-deserved reputation for lacking restraint, as his twitter attacks on the media, Democrats, and other critics show. But a deeper analysis reveals that despite his tweets and personality, some of his policies towards the Middle East have not been so impulsive. On Iran, Trump replaced a campaign promise to “tear up that deal” with enforcement of the nuclear agreement that brought Iran and the international community back from the brink of crisis. On Israeli-Palestinian relations, his omission of direct reference to the two-state solution has morphed into the traditional bipartisan policy of opposing settlement growth and moving towards recognition of the Palestinian right to self-determination and statehood. Thus, his decision to postpone the transfer of the embassy to Jerusalem is the last of several well-calculated steps that amend his tendency to play fast and loose with American foreign policy.The combination of an impulsive personality, big stick and dramatic change of Middle East policy may turn out to be highly potent. As Trump continues to prod Netanyahu and Abass to come to the negotiations table, he faces two leaders of two self-righteous peoples, who often give the impression that they are scared of the compromise required for peace more than they are scared of the price of war. Furthermore, both leaders face domestic challenges to their legitimacy and the potential loss of their leadership positions.However, contrary to Netanyahu and Abbas, whose domestic challenges prompt them to resist peace negotiations, Trump’s domestic challenges are driving him to push hard for those negotiations. Hence, it is the growing heat of his investigations coupled with the lack of clear foreign policy success up to this moment, that increase his motivation to engage on the Israeli- Palestinian issue, and push Netanyahu and Abbas far beyond their comfort zones.Trump’s policy-swings, illustrated recently when he rescinded on his campaign pledge to move the United States embassy from Tel Aviv to Jerusalem, reveal that he does not have a clear policy towards the Palestinian-Israeli conflict. But there is a distinction to be made between policy and tools. Trump’s unpredictability, and the apprehension, trust, and cooperation that he generates among Israelis and Palestinians, do provide a robust tool kit. It remains to be seen if powerful tools without an elaborate political vision can deliver the much-sought- after deal that American presidents have been pursuing for decades.Prof. Nimrod Hurvitz is a co-founder of The Forum for Regional Thinking, and teaches at Ben Gurion University of the Negev.