By ASSOCIATED PRESS
AUGUST 1, 2010 15:14
Syrian birds 311 AP
(photo credit: Associated Press)
Advertisement
DUBAI, United Arab Emirates— The latest beneficiary of improved relations between Turkey and Syria is the rare northern bald ibis.In recent years, conservationists have watched in dismay as the numbers of the critically endangered northern bald ibis in a Syrian colony dwindled to just four birds. Extinction seemed almost guaranteed until late June, when neighboring Turkey agreed to donate two juvenile and four adult birds to Syria. The complicated and much-delayed transfer — unthinkable only a few years back — was finalized when Syria's first lady Asma Assad contacted the Turkish prime minister's wife, Emine Erdogan.RELATED:
New Worlds: Darwin's finch and the evolution of smell
Comment: Winging it"I think it's an illustration of warming relations at a high level in the interest of conservation," said Chris Bowden, chairman of International Advisory Group for the northern bald ibis. "It's a very positive thing."Tensions ran high in the 1980s and 1990s as Turkey developed military ties with Israel and Syria sheltered Turkish Kurd guerrilla leader Abdullah Ocalan. At one point, Turkey massed troops on the border with Syria. But Syria expelled Ocalan in 1998, and the two countries have come together as Turkey soured on the West.Turkey and Syria earlier this year lifted travel visas to boost trade, and the Turkish military staged a joint drill with Syrian soldiers on their shared border. Turkey, which aspires to be a regional mediator in the Middle East, also worked to ease tensions between Iraq and Syria over demands that Damascus extradite two suspects wanted in suicide attacks on government ministries in Baghdad.The bird that drew the two nations closer is a strange-looking one, with a red, curved beak, bald head, shaggy black crest and stork-like legs. It was once commonplace across North Africa, the Middle East and parts of Europe, and centuries ago was so revered by the pharaohs that it had its own hieroglyphic symbol, said Bowden. But habitat loss and hunting have devastated the population in recent decades. Now, there are only colonies of 450 birds in Morocco and around 100 in Turkey — with nearly all the Turkish birds held in captivity to boost their breeding number, he said.The population in Syria was rediscovered in 2002, hidden away in limestone cliffs outside the ancient city of Palmyra in central Syria. But then the numbers of the Syrian birds dropped from seven to four — mostly due to the treacherous migration journey the birds must make each year in July to the highlands of Ethiopia.The journey for the adult birds takes them across Jordan, Saudi Arabia, Yemen and then across the Red Sea to Ethiopia, while the juveniles are believed to migrate only as far as Saudi Arabia or Yemen. In recent years, three Turkish birds were electrocuted in Jordan, one Syrian bird was shot dead by hunters in Saudi Arabia and another died this month due to exhaustion in Saudi Arabia."To be honest, I'm not very optimistic," Birdlife International's Sharif Jbour said of the prospects for the Turkish colony. "We are talking about a tiny colony that migrates over 2,000 kilometers (1,242.80 miles).... They are facing huge threats during migration from hunting and electrocution. If we lose a single male, it could be the end of the colony."But Jbour said the newly donated birds have given him hope that the colony could grow from the current lone breeding pair to as many as seven or eight. The two donated juveniles joined the migration this year while the four adults remained behind to bolster the breeding prospects. 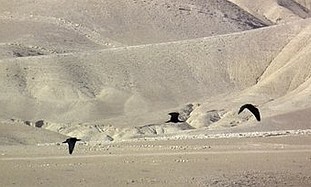 Three juvenile northern bald ibis birds fitted with solar satellite transmitters fly in the desert at Wadi Abiat"This is one of the best conservation studies ever carried out on a species seriously threatened," Yasar Dostbil, the director of Nature Protection and National Parks Directorate in Turkey. "We are very glad to be a part of it."Before the transfer took place, the six birds were kept in cages as a group and were given more room to fly than the other captive birds so they could become accustom to wild conditions. Conservationists admitted there were still doubts about whether the juveniles would join the Syrian birds. But as soon as they arrived in Palmyra by truck, a wild bird approached the cage and things went well from there."Amazingly, the Turkish juveniles joined the Syrian birds and migrated with them," Jbour said. "Those birds had never before migrated. They had lost their migration instincts. It's truly a triumph in the preservation aspect."Now, a team from the Syrian government and Saudi naturalists are in the midst of tracking the birds after they attached satellite transmitters to the Turkish juveniles. The aim is to better understand the route they take, their diet and the threats they face.The birds, which set off about two weeks ago, have now reached southwestern Saudi Arabia. The RSPB has set up a web that allows views to track their route."Today we found a Turkish bird in Saudi Arabia," said Ahmed Jaber, a Syrian wildlife ranger who is helping in the tracking. "We named her after the first lady of Turkey."
Advertisement
Subscribe for our daily newsletter