Their last performance in Israel was in 2015 at Yarkon Park, in Tel Aviv.

Stating “there’s no place in the world that’s like Israel,” Ryan Tedder, OneRepublic’s frontman, told Ynet last week that he and the band are excited to return.

“We had the absolute best time the last time we were there. I will never forget that show: 22,000 people there - it was crazy. We’re so pumped to do it again. We can’t wait to see you there.”

“We had the absolute best time the last time we were there. I will never forget that show: 22,000 people there - it was crazy. We’re so pumped to do it again. We can’t wait to see you there.” 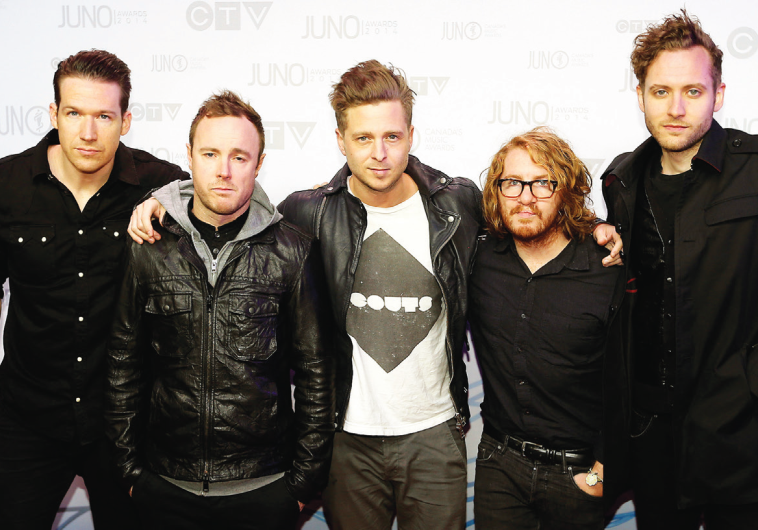 ONE REPUBLIC appears on a red carpet in Canada last year (credit: REUTERS)

Following their show here (which surprisingly doesn’t appear on the Live Nation web page for the band’s tour - a representative called it an oversight), they jet off to Saudi Arabia and then Dubai to continue their international tour.

They gained attention as an unsigned band on the old MySpace platform. By 2007, they became an international success with their debut album Dreaming Out Loud and its lead single, “Apologize”, which earned them a Grammy Award nomination. Their 2013 album Native cemented their world popularity along with its biggest single, “Counting Stars”.

There have been changes to the band’s lineup over the years, as well as attempts to broaden their sound with electronic dance and pop flourishes but their meat and potatoes remain mainstream contemporary pop and Tedder’s anthemic songwriting.

The band is likely to perform their biggest hits from  “Counting Stars,” “Sunshine,” “Secrets,” “Run,” “I Lived,” “Apologize” to “West Coast”, as well as A“I Ain’t Worried”, a song that was recently written for this year’s box office hit Top Gun: Maverick.

Tedder said that his last visit to Israel in 2015 reminded him of his home in California due to the similar weather both places have. He also said that Israel has some of the tastiest food he’s eaten in his life.

Tedder also told Ynet that he has a lot of Israeli friends in Los Angeles who “always tell [him] when they return from a visit how popular the band is there, which is always fun to hear.”

He noted his Christian upbringing and that his parents love Israel in an unusual way, and because of that, he read Biblical stories and texts related to Israel.

Tedder also said that he will not call for a boycott of Israel just because other artists are doing it, noting his preference to stay out of political agendas because he believes that music is above politics.

Although OneRepublic may have peaked a while ago in terms of popularity, their professionalism, general likeability, enthusiasm and a slew of good songs should make next week’s show more than worthwhile.

The show, presented by Live Nation Israel and BluestoneGroup, will take place according to the Health Ministry’s instructions. General admission tickets as of Tuesday were still available on the Ticketmaster website for NIS 295 at this link: https://www.tmisrael.co.il/event/MRL17/ALL/en.

The bar mitzvah edition is almost upon us, with a broad range of music, dance and theater shows lined up at the host venue and the Yellow Submarine, from December 7-14. 03/12/2022 16:43 PM
MUST

Tmuna Festival: Reflecting on the past and future

There is nothing surprising when it comes to the Jewish and Christian winter holidays, Hanukkah and Christmas. Both always fall in December, not quite at the same time but close enough. 01/12/2022 02:37 AM
MUST

The group’s next performances are on December 15 as part of the Spectrum Festival in Jerusalem; and on December 31, when they open for Dudu Tassa at the Barby Club in Tel Aviv. 01/12/2022 02:36 AM
MUST

MOMO: Ohad Naharin’s magic of missing out in Israel

MOMO, which was created in collaboration with Ariel Cohen and the company dancers, seems to hark back in spirit to some of Ohad Naharin’s earlier works in its intensity and musicality. 29/11/2022 23:48 PM
MUST

When Tel Aviv Mayor Ron Huldai presented Madame Butterfly to the public gathered at Hayarkon Park two years ago, he pointed to the painful historic roots from which the opera blossoms. 28/11/2022 22:59 PM
MUST

US dance troupe Momix returns to Israel with 'Alice'

Momix, the acclaimed American dance troupe, returns to Israel next month with ‘Alice’ and invites the audience into their enchanted and imaginative wonderland. 28/11/2022 05:55 AM
MUST

The 11th edition of the annual Anthropological Film Festival offers an intimate glimpse of life around us. 26/11/2022 17:49 PM
MUST

The spread, curated by the socio-political contemporary art museum director Shahar Shalev, dips into a surprisingly broad stretch of fields, walks of life, styles, disciplines and mindsets 26/11/2022 03:07 AM
MUST

Polonsky is a bona fide pioneer. This isn’t about Zionist ideology, dredging malaria-infested swamps and building kibbutzim. This is “just” about art. 12/11/2022 17:50 PM
MUST

The movie serves as the curtain raiser for the Soundtrack Tel Aviv Film Festival, a new music documentary film event that takes place at the Tel Aviv Cinematheque November 15-19. 12/11/2022 17:50 PM
MUST

Held at the Jerusalem Cinematheque, the seventh AniNation festival showcases the best of local, and global, animated cinema. 12/11/2022 17:49 PM
MUST

Veteran instrumentalist Taiseer Elias pays tribute to the Egyptian diva Oud Kulthoum at the Jerusalem International Oud Festival. 08/11/2022 04:19 AM
MUST

Artistic directors Dana Ruttenberg and Oded Graf, who are now in their third year at Curtain Up, strived to broaden the scope of the festival both geographically and conceptually.  07/11/2022 03:45 AM
MUST

The Dybbuk – Through Times and Generations closes in January 2023. But for now, visitors to the Israel Goor Theatre Archives and Museum have plenty to see, ponder and marvel at.   05/11/2022 00:13 AM
MUST

Currently being staged at the Habima Theater in Tel Aviv, the show began in September and plans to keep going for as long as people will turn out. 02/11/2022 04:05 AM
MUST

The forthcoming local tour will offer us a pungent and infectious whiff of early New Orleans jazz, when joyous and eminently danceable sounds and rhythms were the order of the day 31/10/2022 00:06 AM
MUST

The 23rd edition of the Jerusalem International Oud Festival casts its stylistic net far and wide 29/10/2022 16:49 PM
MUST

Although OneRepublic may have peaked a while ago in terms of popularity, their professionalism, general likeability, enthusiasm and a slew of good songs should make next week’s show worthwhile. 29/10/2022 01:13 AM
MUST

This year, the Israeli film festival will feature guests who are among the most acclaimed directors, producers, screenwriters and actors working all over the world. 22/10/2022 17:45 PM
MUST

Longtime purveyors of rural psychedelia will return to Israel to perform at The Piano Festival concerts – an early and late show on November 2 at the Tel Aviv Museum. 22/10/2022 17:45 PM
MUST

The InDnegev pop and rock festival has been there and done that over the years. At least 12,000 music fans and tranquility seekers are due to flock down to Mitzpeh Gevulot for the three-day bash. 20/10/2022 11:18 AM
MUST

Simphiwe Mbunyuza brings his Xhosa roots to his richly textured ceramic works that feature cultural symbols 15/10/2022 11:38 AM
MUST

Out and about on Sukkot

The veteran Ein Kerem festival returns to Jerusalem with a multifarious bang next week. 03/10/2022 02:03 AM
MUST

An extensive video installation at Hansen House looks into the material and the emotional, and gender. 01/10/2022 19:43 PM
MUST

Nitzotzot may very well provide the spark for a whole new stimulating cross-disciplinary cultural experience just waiting for us to imbibe at our leisure and, no doubt, pleasure. 24/09/2022 17:58 PM
MUST

The expansive site-specific work, which goes by the eminently appropriate title of Reflection, is the first of its kind to grace the subterranean pool that has existed since 789 CE. 24/09/2022 17:55 PM
MUST

Learn about Yemenite Jewish culture at this new Jerusalem exhibit

“You are Beautiful, My Love, ”a new exhibition at the Museum for Islamic Art, offers a glimpse of Yemenite tradition. The exhibition closes on December 31. 17/09/2022 17:46 PM
MUST

Polish Jazz Festival returns to Israel for the third time

The third annual Polish Jazz Festival takes place this week at the Gray Club in Tel Aviv (September 13-15), under the artistic directorship of Barak Weiss. 12/09/2022 03:13 AM
MUST

The acclaimed experimental folk rockers will perform at the Barby Club in Tel Aviv in their Israel debut. 10/09/2022 16:39 PM
MUST

How much notice we take of our surroundings lies at the core of an exhibition currently on display at Art Cube Artists’ Studios in Talpiot as part of the Manofim Jerusalem Contemporary Art Festival. 10/09/2022 00:46 AM
MUST

Adoration for Leonard Cohen and his musical and textual oeuvre next week when he performs in the Who By Fire concert at Israel's Beit Avi Chai. 10/09/2022 00:46 AM
MUST

The 38th Haifa International Film Festival will include 50 new Israeli films and two new television series. The festival takes place October 8-17. 07/09/2022 02:05 AM
MUST

The 23rd edition of the International Jerusalem Chamber Music Festival offers a winning combination of quality and intrigue. 03/09/2022 16:30 PM
MUST

The Sidratarbut series digs into the Jerusalem psyche with street art

The project mines the multifarious rich seams of culture, arts across numerous disciplines, schools of thought, religious leanings and ethnic aspects that abound in Jerusalem. 27/08/2022 04:02 AM
MUST

The festival, initiated by the Incubator Theater and members of the Kishon family, is due to run at seven venues across Jerusalem from August 21-27. 20/08/2022 18:46 PM
MUST

Nick Cave, the high priest of rock & roll, to shine in Israel return

Either the world’s most popular cult artist or its most anonymous superstar, the 64-year-old Australian singer-songwriter has inherited the crown from Leonard Cohen as the high priest of rock & roll. 20/08/2022 00:03 AM
MUST

Visitors are welcome to join a tour at the Museum for Islamic Art in Jerusalem to hear the story of the theft and years-long investigation to solve it. 19/08/2022 23:53 PM
MUST

California collector Irvin Ungar has arrived in Israel and will be giving free lectures on his "friend," Polish Jewish artist Arthur Szyk. 14/08/2022 11:22 AM
MUST

The alfresco curtain-raiser takes place in Liberty Bell Park, which is home to the new expansive and well-appointed Train Theater premises. 13/08/2022 16:07 PM
MUST

'Into The Light': Concert tribute to Nazi-persecuted composers

The play will star 10 actors both native Israelis and English speakers from the general area of Jerusalem and farther. 06/08/2022 16:51 PM
MUST

‘Rocky Horror’ stage show is on its way to Israel

It must be difficult for artists who take the stage to completely immerse themselves in their work and remain unaffected by the ego-pumping response of the audience. 30/07/2022 20:51 PM
MUST

Award-winning 'Wolf of Baghdad' comes in Israel at Animax

Cartoonist Carol Isaacs, who often draws under the name Surreal McCoy, is set to bring the cinematic adaptation of her award-winning Wolf of Baghdad comic to Israel for the first time. 30/07/2022 17:24 PM
MUST

The latest program of one-on-one instruction, masterclasses and concerts kicks off on Sunday, July 31, and will continue for almost three weeks through to August 18. 30/07/2022 17:23 PM
MUST

The conference included a next-gen women entrepreneurs competition sponsored by the Luzzatto Group. 28/07/2022 22:33 PM
MUST

Fourth time's the charm as Calexico returns to Israel

This Jerusalem-born rock musician made a name for himself for replicating the spirit, sound and technique, of one of the rock world’s true greats. 23/07/2022 16:17 PM
MUST

From indoor amusement parks to zoos to interactive museums, Jerusalem may just be Israel’s most kid-friendly city. A comprehensive guide for all the family. 22/07/2022 19:53 PM
MUST

Pink Martini returns to Israel - must be seen to be believed

Gaby Hamburg Fhima: “There is an oxymoronic mix here, between beauty and ugliness, pain and pleasure. All of that is deeply entrenched in her works.” 16/07/2022 01:59 AM
MUST

Hutzot Hayotzer: A celebration of art in the holy city of Jerusalem

This year, the festival will take place from August 15-27, enabling artists to display their wares and some of Israel’s top performers to entertain the crowds at Sultan’s Pool nearby. 09/07/2022 12:45 PM
MUST

A rhapsody of Freddie - Queen cover songs head to Israel

Buckle up for the return of the Pixies to Israel

“We wanted the Jerusalem Beer Festival to open the capital’s summer events season rather than close it,” said organizer Eli Giladi. 02/07/2022 16:35 PM
MUST