IDF on alert for terrorism as 75,000 plan to visit Cave of the Patriarchs

By YAAKOV LAPPIN
MARCH 27, 2014 14:02
IDF Medical Corps drill simulating suicide attack at Cave of Patriarchs
(photo credit: IDF SPOKESMAN'S OFFICE)
Advertisement
The IDF has completed preparations to host an expected 75,000 Israeli visitors at the Cave of the Patriarchs in Hebron during Passover.The army’s assessment is that the planned holiday event can proceed and that security threats are under control. Nevertheless, a terror cell that shot dead an IDF soldier in the area last year remains at large, and preparations made in recent weeks included an exercises led by the IDF Medical Corps to practice responses to mass casualty terrorism attacks on the holy site. 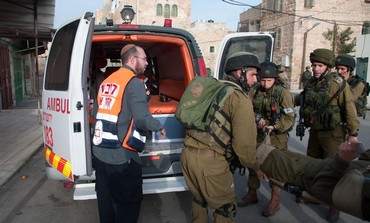 IDF drillCapt. Hisham Abu Salah, the chief medical officer for the Judea Brigade, told The Jerusalem Post last week that responses to mass casualty incidents can be activated at a moment’s notice.“We held a training exercise to deal with all of the threats that we might face in Hebron’s Cave of the Patriarchs area… and mobilized forces across the sector, including Border Police and civilian police,” Abu Salah said. 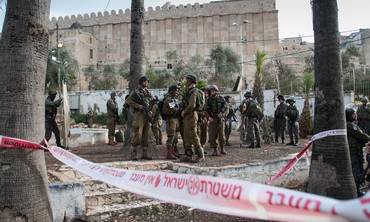 Soldiers stand outside of Cave of Patriarchs in HebronThe whole of the army’s medical response system was involved, as well as Magen David Adom paramedics, he added.“The idea is to create a well-oiled machine and put it on standby,” he explained.The attack simulated a suicide bomber dressed up as a religious Jew blowing himself up in the cave, and an explosive device going off in the area at the same time.“In any attack, our goal is to flood the area with as many forces as possible – military and civilian – and have them cooperate,” Abu Salah said.“Then, we must create order out of a mess. We have to sort the injured according to the severity of their wounds. After that, the evacuation phase occurs. We have to look at what to do if the main road is blocked, and devise alternative evacuation routes, in accordance with the latest security evaluations,” he said.It was a difficult exercise, Abu Salah stated. “I have no doubt we are more confident after each exercise like this,” he added.The operations branch officer for the Judea Brigade, Maj. Amir Friedman, said, “This exercise is part of the level of readiness we need to achieve, ahead of the Hol Hamoed period of Passover.We’re expecting some 75,000 visitors to Hebron over two days. On ordinary days, the Jewish community here numbers 700 people, and receives 500 to 1,000 visitors a day.”“We are ready to secure this event,” he said.One of the key challenges is to locate alternative roads to clear a path for ambulances, since the main road is narrow and will be filled with traffic during Passover, he added.“Every contingency, from snipers to suicide bombers, has a set response,” Friedman stated.In September an IDF soldier, St.-Sgt. Major Gavriel Kobi, 20, was shot dead by a Palestinian sniper while securing the Cave of the Patriarchs during Succot.The terror cell behind that attack has never been caught, Friedman noted Nevertheless, security threats in the area are under control, he said, thanks to continuous, daily operations to disrupt and thwart attacks.“Our evaluation of the situation is that this event can go ahead,” Friedman said.