By JPOST.COM STAFF, JOANNA PARASZCZUK
Demonstration in front of Labor Court 390
(photo credit: Marc Israel Sellem)
Advertisement
The Transportation Ministry announced that it will bolster bus services in the event that the general strike continues into the afternoon and Israel Railways does not resume its activity, Army Radio reported on Thursday. An agreement between the Histadrut Labor Federation and Treasury to end the strike was not expected to be signed until 4 p.m., according to a Foreign Ministry statement.After a night of extending deadlines and intensive negotiations, the two sides were on the verge of signing an agreement to end a general strike in its second day. According to preliminary reports, the Histadrut's agreement includes two parts: a deal reached with private employers Tuesday and a deal with the government. The Finance Ministry reportedly agreed to absorb a small number of contract workers as full time employees and increase salaries and benefits for cleaning workers and social workers.The agreement with private employers, settled with the Federation of Israeli Economic Organizations, includes a partial transfer of cleaning workers to direct employment, transfer of contract workers whose jobs mirror directly employed workers into direct employment and giving full worker's rights to those who remain as contract workers.FICC opposes legally enforced direct employmentMeanwhile, later on Thursday morning, the Federation of Israeli Chambers of Commerce (FICC) set out its position regarding contract workers in its emerging agreement with the Treasury and Histadrut.FICC president attorney Uriel Lin said the organization continued to oppose legally enforced direct employment, and added that employers should be able to agree to direct employment voluntarily. However, FICC said it agreed to improve working conditions for agency workers. Lin said the right way to do so was via wide-ranging agreements over basic rights, including minimum wage and other social benefits. Agreements should be made with each individual industry sector, Lin said, and added that mandatory pension agreements for employees are already in place. 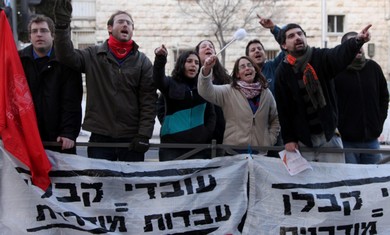 "Forcing direct employment would remove from employers the freedom to manage their businesses, and prevent them from adapting employment structures to changing market conditions," Lin said. "Under those conditions, many businesses would not survive and the entire Israeli economy would lose its ability to compete globally. Instead of boosting employment, it would lead to increased unemployment." The FICC said it opposed the agreement reached between the Manufacturers Association of Israel and the Histadrut over contract workers.The FICC represents most of the country's trade and services sector, which according to the Central Bureau of Statistics, is 65% of business sector output and Israel's largest employment sector. During the past decade, 427,000 jobs were created in the sector, compared with 20,000 in the industrial sector. Local authorities protest contract worker dealHours before the deal was finalized or signed, the Union of Local Authorities said Thursday that it would not be able to implement it.Local Authorities Charmian Shlomo Bohbot asked Prime Minister Binyamin Netanyahu and Histadrut Chairman Ofer Eini not to accept portions of the agreement affecting local authorities, and protested their exclusion from negotiations.According to Bohbot, the current deal would cost local authorities upwards of a billion NIS.A list of who is striking and what services will be affected is available here.Nadav Shemer contributed to this report.
Advertisement
Subscribe for our daily newsletter