By GREER FAY CASHMAN, Gil Stern Stern HOFFMAN
OCTOBER 7, 2013 06:47
IDI's Israel Democracy Index, 2013 370
(photo credit: Courtesy )
Advertisement
Final approval for a peace deal should be decided by a referendum with a Jewish majority, a plurality of Jewish respondents said in the Israel Democracy Institute’s annual Democracy Index, which was presented to President Shimon Peres Sunday.The annual survey of 1,000 Israelis, representing a statistical sample of the population in assessing the state of Israeli democracy, is looked to as a critical barometer of Israeli public opinion by politicians, government decision-makers and newspapers of record around the world. 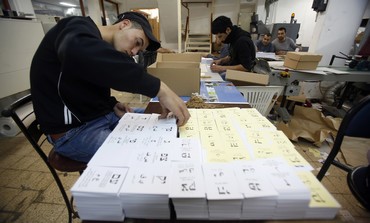 The poll found that for final approval of a peace deal that includes withdrawal from the West Bank and evacuation of settlements, 30.6 percent said the matter should be decided by a Jewish majority in a referendum.Another 24.7% said that all citizens of Israel should decide in a referendum, 24.9% said that the Knesset should make the decision, 9.1% said that it should be decided by rabbis and religious leaders, 3.8% said that no one has the authority to make such a decision, and 6.9% refused to answer.The numbers were very different among Arab respondents, 45.2% of whom said all citizens should make the decision in a referendum. A surprising 11% said there should be a Jewish majority, 9.7% said the Knesset, 9% religious leaders, 13.5% said no one has the authority to make such a decision, and 11.6% refused to answer.In a sign that the image of politicians is improving, the poll found that the percentage of Israelis who believe Knesset members are working hard and doing a good job rose from 33.9% in last year’s poll to 45.8% this year. When asked whose interests MKs are working for, 66.8% said they are working for their own interests, while 25.3% said they are working for the public’s good. Last year, 78.1% said the politicians were working for themselves and only 18.5% said the public.However, the percentage agreeing with the statement that it does not matter which party people vote for because it will not change the situation rose from 51.1% to 58.1%.Among Israeli Jews, the most trusted institutions were the IDF, the president and the Supreme Court, and the least trusted were the Chief Rabbinate and political parties. Israeli Jews on the Right were more likely to trust the media less. Among Israeli Arabs, the Supreme Court and the media were the most trusted institutions, and the prime minister was the least.There was little trust in human and civil rights organizations, such as the Association for Civil Rights in Israel and B’Tselem. Among Israeli Jews, 52% said they damage the state, while 36% disagreed.Among Israeli Arabs, 42% agreed and 45% disagreed.Asked how they see Israel’s overall situation, 43% said so-so, 37% rate it as good and 18% rate it as bad. Among Israeli Arabs, 39% rate it as bad, 31% as so-so and 28% as good. Eighty-three percent of Jewish Israelis were proud to be Israeli and 67% felt like a part of the state and its problems, while 40% of Arab Israelis felt such pride and 28% felt a sense of belonging to the state. 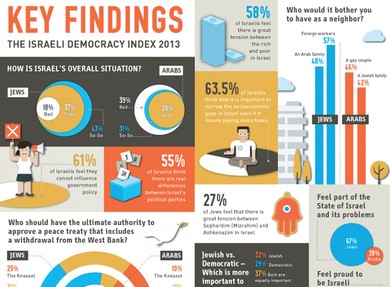 Click here to see the IDI annual Democracy Index graphic in full size.Both Peres and IDI President Arye Carmon expressed concern on Sunday over the widening gap among Jewish respondents between those who perceive Israel as a Jewish and democratic State, and those who attach greater importance to the democratic component.Within the Jewish public, 37% believed that the Jewish character and democratic character of Israel are equally important, 32% assigned greater priority to the Jewish element, and 29% gave greater weight to the democratic nature. At the same time, 75% of the Jewish public believed that the State of Israel can simultaneously be both a Jewish state and a democratic state, while 22% did not think so. The percentage saying the democratic character is more important has fallen in recent years, while those saying Jewish has risen.Carmon said that the continuing decline in attitudes to the democratic component was very worrying, and that it was vital to find a balance between Jewishness and democracy.As for withdrawal from the territories in the event of a peace agreement with the Palestinians, Carmon pointed to an acute conflict between halacha and politics.Praising the work of the IDI, Peres compared it to the role of a physician, saying that it takes the pulse of society.The president said that the report’s findings were both encouraging and troubling. He was pleased that a high percentage of Israelis take pride in the country, but it bothered him that democracy, which he asserts to be a Jewish concept, is not recognized as such.The Bible tells us that all people are created in the image of God and are created equally, he said.People may be different but they have equal rights.What today is defined as social solidarity comes from the traditional Jewish maxim of “Love thy neighbor as thyself,” Peres continued.The Bible exhorts the Jewish people to remember that they were slaves in Egypt and strangers in a strange land. This too is part of democracy, he insisted.This is why it is essential to implement the two-state solution, he explained. If Israel is not a state with a Jewish majority, it would cease to be a Jewish and democratic state, he said, adding that a separate Palestinian state could provide a solution for the Palestinian refugee problem.If there is peace, he said, the statistics in democracy index reports will change radically.Peres was disturbed by the growing tensions between Jews and Arabs, saying that every time a Jew or an Arab is killed by someone from the other side, it provokes a violent response.Peres said that what makes Israel unique is that it is the only country in the world whose population has multiplied more than tenfold in 65 years, and that in that time it never stopped changing.Although every wave of immigration carried with it the commonality of Jewishness, he said, each wave of immigrants brought with it different cultures and norms.The president highlighted the shift from an agrarian society into a scientific society, as an example of the country’s capacity for change.He said that what he found particularly gratifying in the report was the willingness by respondents to shoulder part of the burden of reducing the gap between the rich and the poor by paying higher taxes.Tamar Hermann, who headed the team that prepared the report, said that when Americans and Europeans were asked about reducing the gap between the “haves” and the “have nots,” their attitude was different to that of the Israelis.They were absolutely opposed to paying higher taxes.
Advertisement
Subscribe for our daily newsletter