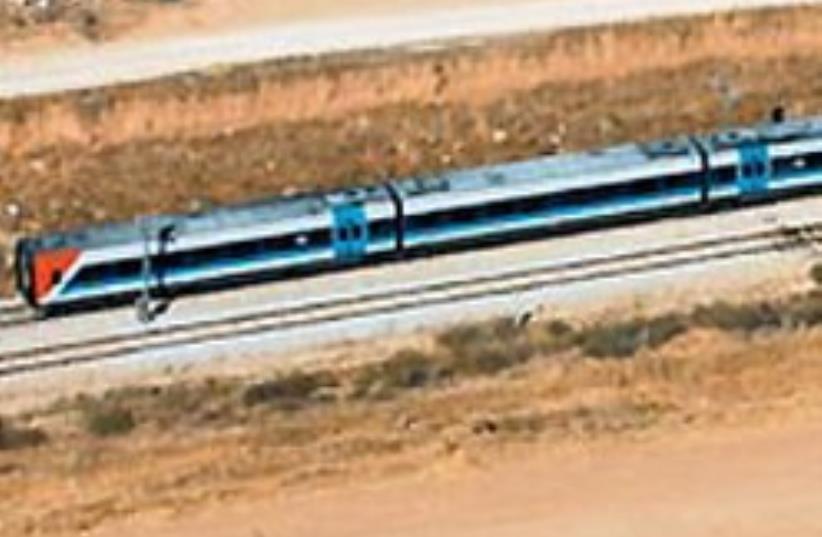 An aerial view of a an Israel Railways train.
(photo credit: Ariel Jerozolimski)
Advertisement
Members of the Rail workers' union were released from prison on Thursday afternoon, after their arrest led to nationwide railway strikes. Trains began moving again at shortly before their release.The worker's announced the strike without prior notice, after ten union members were arrested during a demonstration outside of the newly appointed chairman of Israel Railways Board, Uri Yogev's home on Wednesday night. The workers claim that Yogev supports privatizing Israel Railways, a step they fear will lead to the mass firing  of rail employees.RELATED:
Haifa, SPNI call for railway segment to go undergroundThe hearing on whether Israel Railways workers may strike or not was delayed until next Monday, the Tel Aviv District Labor Court announced on Thursday morning.The delay is in order to allow the chairman of the railway workers' union, Gila Ederi, to attend the hearing, after her arrest on Wednesday.The injunction forbidding railway workers to strike, issued on Wednesday, will remain in effect until further notice, Judge Efrat Laskar said.The rail workers' union expected interruptions in train service, despite the court injunction, due to the difficulty of informing employees of the court's early-morning decision.Rail workers announced the start of an immediate strike that saw all trains in Israel grind to a halt late Wednesday night. The strike was announced to be open ended – until further notice, the union said.Israel Railways said that all trains in transit reached their final destinations, but no trains left their stations following the union announcement.Israel Railways CEO Yitzhak Harel said in an interview with Israel Radio on Thursday morning that their were no plans to fire employees. He accused the rail workers' union of acting as if "the Israeli public were their captives."Last month, Transportation Minister Yisrael Katz warned that Israel Railways would be closed if the safety level of trains was not raised.Katz told the railway administration to prepare a plan to improve train safety amid recent accidents, including a collision between two trains that injured 60 people in Netanya when one of the conductors ignored a red light.Katz said that if within four months a program improving railway safety and services that is acceptable to all relevant parties is not presented, train services will be closed.
Advertisement
Subscribe for our daily newsletter