By GREER FAY CASHMAN
JUNE 1, 2014 12:52
LA Lakers forward Pau Gasol with President Shimon Peres
(photo credit: GPO)
Advertisement
“My God!!” exclaimed President Shimon Peres as he emerged from his office to greet co-captain of the Los Angeles Lakers Pau Gasol, who is in Israel at the invitation of Hapoel Jerusalem to conduct a basketball workshop for young Jewish and Arab players.
The President didn’t even reach the shoulder of the 2.15m hoopster who towered over everyone in the room.  When asked to shake hands with Gasol for the photo opportunity, Peres said: “I shake his hand, but I don’t know where he is”. 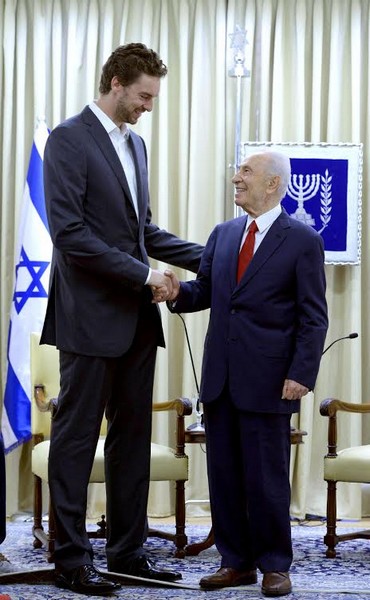 Pau Gasol and Shimon Peres
Gasol presented Peres with his own Spanish national team basketball shirt.  Holding it up, the President asked: “If I put it on, will it make me taller?”
Despite the comedy banter, the two had some serious discussion about the importance of sport as an educational tool towards peace.
“In sport people learn to play without discrimination and in the spirit of fairness” said Peres. “In wars, people fight to kill.  In sport, they fight, but become friends.”
Gasol who is visiting Israel for the first time with the intention of learning about the country and its people said that sport is an amazing tool with which to educate others and to compete in a fair way without even speaking the same language.
He remembered what it had been like for him to meet professional players and be inspired by them when he was a kid, and he hoped to be able to inspire Jewish and Arab youngsters during his stay in Israel, he said.
He conducted a basketball workshop in Malha on Sunday night
Before leaving the President’s Residence Gasol was besieged by reporters whose questions he fielded with quiet diplomacy.
When asked if Maccabi Tel Aviv coach David Blatt could be a coach with the NBA, Gasol said that things work differently in the NBA, but since Blatt had been an assistant coach with the Lakers for one year, that would work in his favor.  “It all depends on the opportunities he gets” said Gasol.
Advertisement
Subscribe for our daily newsletter