Tribute to Edgar Bronfman to be held at Israel Museum tonight

More than 300 invited guests are scheduled to attend a memorial tribute for longest-serving president of the WJC, who died in December.

By JERUSALEM POST STAFF
Canadian philanthropist Edgar Bronfman (left) meets with former Soviet president Mikhail Gorbachev.
(photo credit: JERUSALEM POST ARCHIVE)
Advertisement
More than 300 invited guests are scheduled to attend a memorial tribute at the Israel Museum on Thursday evening to Edgar M. Bronfman, the longest-serving president of the World Jewish Congress (1979 to 2007) who died at the age of 84 on December 21, 2013. 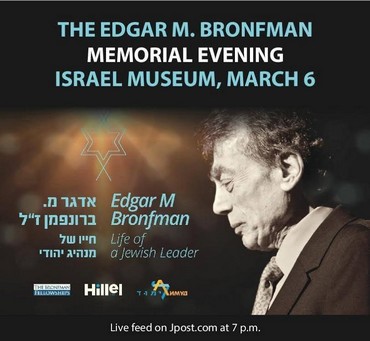 Among the speakers at the ceremony will be one of Bronfman’s sons, Matthew Bronfman, Knesset Speaker Yuli Edelstein, opposition leader Isaac Herzog and MK Ruth Calderon.A film on Bronfman’s life will be screened, together with video messages from President Shimon Peres and former US secretary of state Hillary Clinton.The event was organized jointly by Limmud FSU, Hillel Israel and the Bronfman Youth Fellowships, all of which Edgar Bronfman supported.“Edgar Bronfman was one of the major personalities who helped to open of the gates for Soviet Jewry,” said Limmud FSU founder Chaim Chesler, one of the organizers.“Among other things, he championed the cause of restitution from Swiss banks for Holocaust survivors and played a leading role in reviving the Hillel organization on university campuses across the world. He was especially proud of the Bronfman Youth Fellowship, a network of young Jews from Israel and North America. Through his son Matthew and the Samuel Bronfman Foundation, he also generously supported Limmud FSU, a program which revives Jewish life among young Russian-speaking Jews in some 10 countries.”The ceremony will feature welcoming remarks from Israel Museum director James Snyder, an invocation from Rabbi Mishael Zion, co-director of the Bronfman Youth Fellowship, and an address by former Hillel president Avraham Infeld, who will convey a message from Hillel Israel.Among the guests will be Aaron Frenkel, president of Limmud FSU, Dana Raucher, executive director of the Samuel Bronfman Foundation, Yosef Ciechanover, founder of Hillel Israel, Dr. Joseph Bachar, the board chairman of Bank Discount, Shalom Fisher of Ikea Israel and Rabbi Yechiel Eckstein, founder and president of the International Fellowship of Christians and Jews.The event will be moderated by Jerusalem Post Editor-in-Chief Steve Linde and Channel 2 presenter Dana Somberg, a graduate of the Bronfman Youth Fellowships. It will include musical interludes by Yonatan Razel and Sanya Kroitor.The memorial evening will be broadcast live on JPost.com starting at 7 p.m.Guests will be given a special magazine paying tribute to Edgar Bronfman produced by the Post, compiled and edited by Asher Weill and designed by Michal Cohen Eckstein.It features letters of condolences to the Bronfman family from, inter alia, Prime Minister Binyamin Netanyahu, US President Barack Obama and former president Bill Clinton, who presented Bronfman in 1999 with the Presidential Medal of Freedom.There is also a powerful article by Edgar Bronfman himself published in the Post in 1982 which is still remarkably relevant, as well as tributes by Bronfman’s sons, Matthew and Adam, and Jewish Agency Chairman Natan Sharansky. The articles will be posted on JPost.com.
Read more:Unavoidable questions by Edgar BronfmanRemembering EdgarEdgar Bronfman Helped to 'Let his People Go'
Edgar M. Bronfman: A TributeA Personal Tribute