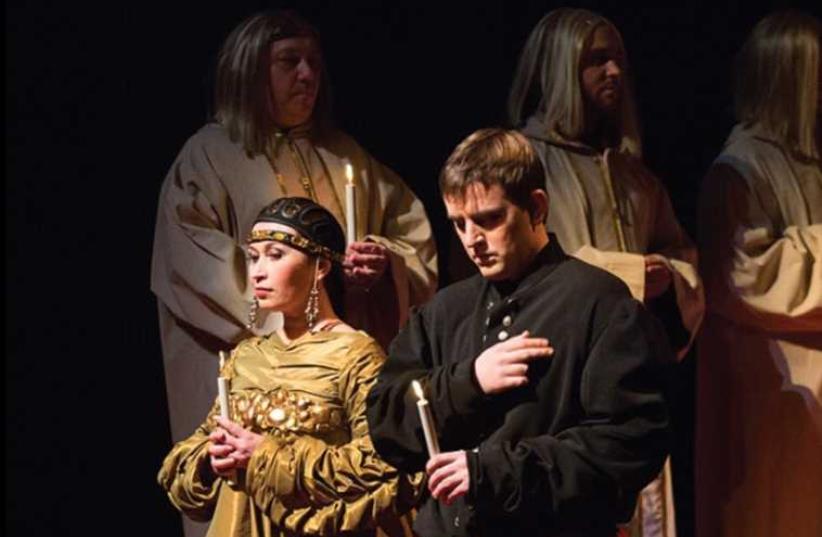 Felix Korobov conducts the ‘The Tsar’s Bride’.
(photo credit: PR)
Advertisement
The Israeli Opera is hosting the New Moscow Opera, which returns with a new production The Tsar’s Bride, a great classic of the Russian repertoire. It is a story of love, passion, jealousy, deceit and murder, enveloped by the powerful music of Nikolai Rimsky-Korsakov.Felix Korobov, a prominent Russian conductor of the younger generation, will conduct part of the performances. For Korobov, who has conducted a repertoire of opera, ballet and symphony in Russia, Germany Finland and Italy, this will be his Israeli debut.Born in Sverdlovsk (now Ekatirinenburg) into a family of artists, he was immersed in music from an early age. After graduating from music school, he continued to the Moscow Conservatory, where he acquired diplomas in cello, chamber quartet and conducting.Speaking on the phone from his home in Moscow, he says, “At the time, the legendary professors of the Moscow Conservatory were still alive and active, and I was very lucky to study with them. They were ultimately honest both as pedagogues and human beings and totally dedicated to music. They saw themselves as its servants. This was the style of the old Moscow Conservatory. For me, they still are my inner conscience; I measure my deeds by their criteria. Their wealth of knowledge was immense, and they shared it generously with us, at the same time always caring for individual development and leaving space for personal rendition of music pieces. It was impossible to find two students who played alike. Now that I myself teach at the conservatory, I follow their pedagogical attitude,” he says.Starting out as a cellist, Korobov switched mostly to conducting. His career has been going well.“Fifteen years ago I came to Moscow’s Stanislavsky and Nemirovich-Danchenko Theater and later found myself sharing positions of chief conductor of Moscow’s two leading opera theaters: Stanislavsky Theater and The New Moscow Opera.I got the latter position after the founder of the theater, Evgeny Kolobov, died. It all started when his widow invited me to conduct The Tsar’s Bride,” he recounts Speaking about the current production, the conductor says, “For Kolobov, who was well known for his editing of operas, The Tsar’s Bride was his favorite piece. He even named his daughter Marfa after the opera’s main character. As time passes, some of his renditions sound less convincing, but when he passionately led his musical forces, all doubts simply evaporated.He worked on The Tsar’s Bride for a while but died just when his major ideas about his rendition were formulated. His widow suggested that I complete the work, and I immediately agreed. Not only was it a great honor, but I also adamantly believe that the ideas of a great master – and Kolobov certainly was one – should be realized.”Although conducting opera in Moscow takes up most of his time, Korobov still finds time for international tours as a conductor and also performs as a cellist, mostly in chamber programs.The Tsar’s Bride will be performed from May 8 to 19 at the Opera House in Tel Aviv. For reservations, call (03) 692-7777. For more details: www.israelopera.co.il/eng.