A loan of Jeremiah Lamenting the Destruction of Jerusalem from the Rijksmuseum, was a reason to set up a special exhibition displaying masterly works from the vast collection of The Israel Museum. 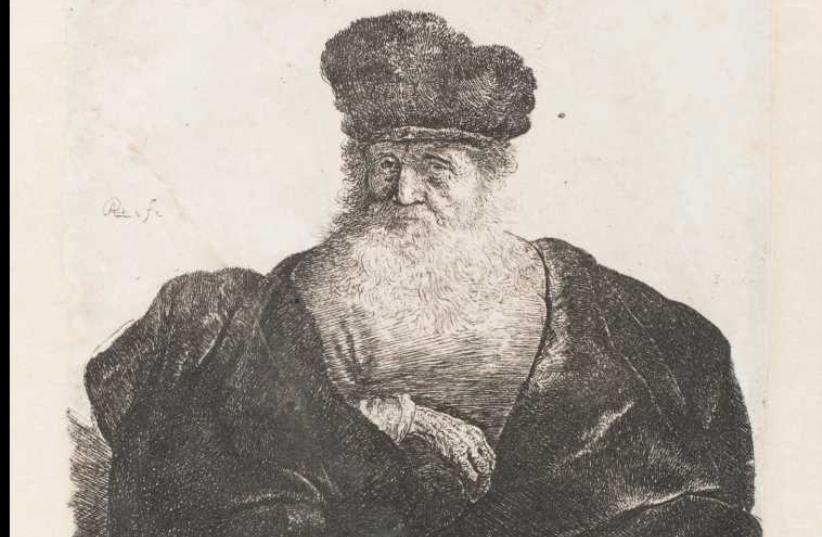 Rembrandt Harmensz van Rijn, Old Man with a Beard, Fur Cap, and Velvet Cloak, 1632.
(photo credit: THE ISRAEL MUSEUM)
Advertisement
It’s no secret that Rembrandt had a thing about the Bible and, naturally, about this part of the world. But Shlomit Steinberg, the Hans Dichand senior curator of European art, quickly heads off claims to some kind of co-religionist intimacy with the 17th-century Dutch master.“Rembrandt wasn’t Jewish,” says Steinberg, who curates the upcoming “Rembrandt, from Amsterdam and Jerusalem” exhibition that opens at the Israel Museum on June 3. “In fact,” she continues, “his parents kept changing their religious convictions due to political demands.”Having put the Jewish Rembrandt theory firmly to rest, one can get down to the business of appreciating the genius of the man, as well as getting a glimpse of some of his sources of inspiration, and others who were inspired by him. Besides some masterly oil paintings and prints by the Dutchman, the 22 items on display include two works by Rembrandt’s teacher Pieter Lastman and of his disciples such as Gerrit Dou, Ferdinand Bol, Govaert Flinck, as well as his contemporary Salomon Koninck.Steinberg says that the accumulation of Rembrandts and Rembrandt-associated works spawned the new show, sparsity of impressive originals notwithstanding.“It would have been wonderful to get our hands on loaned works [by Rembrandt] from abroad and put on a blockbuster show, but we have a lot to be proud of in the museum’s collection, too,” notes the curator.“We have a large number of works on paper and other works by his school, and together, I think, they produce a really good display.”The curator’s evolving realization that the Israel Museum does, in fact, have something to offer Rembrandt devotees and others was augmented by the loan of Jeremiah Lamenting the Destruction of Jerusalem, which Rembrandt painted in 1630, from the Rijksmuseum in Amsterdam.Steinberg points out the similarity of expression between the portrayal of Jeremiah and the anguish conveyed in St. Peter in Prison, which was painted a year later and is in the Israel Museum’s collection.The associative exhibition gestation process began to gather pace when Steinberg started digging even deeper into the Rembrandt works on paper, kept in the museum’s storage facility.“I went to our Prints and Drawings Department and, to my great surprise and joy, I discovered that they have a portrait of the old man, who appears in the two oil paintings.Rembrandt etched the portrait in 1632. What could be better than that?!” she says.The die was cast for the “Rembrandt from Amsterdam and Jerusalem” exhibition.“I then found two selfportraits from the 1630s, when he was a very young man, and quite a dandy,” Steinberg continues, explaining that context is all-important and that it enhances the spectator enjoyment and information experience.“It would have been a shame to have hung just a couple of things on the wall, among all the German, Spanish, Austrian and Italian works. I thought, ‘Let’s do something more attractive. Let’s take items from my collection and the best from the prints and drawings collection,’” she says.The Rembrandt whip-round was then filtered through a thematic filter, and the conceptual substratum for the exhibition eventually materialized.“I thought we should do something based on the New Testament-Old Testament continuum, and we would then see that we have someone here with a very statement about the figures of the prophets and the disciples and about people who sacrificed their lives for some belief,” she explains.Steinberg feels that we may be able to learn a lesson or two from Rembrandt’s subjects.“I think for us, with our modern- day cynicism, it is difficult to grasp how someone can fall to pieces like Peter or Jeremiah.You see this man in prison [St.Peter], who was once a fisherman, and who becomes totally distraught because a few hours earlier he didn’t manage to acknowledge Jesus as his mentor.He is racked with pangs of guilt because he sees himself as a coward and also because he was forewarned that this would happen and he could be taken out of the prison and subjected to another crucifixion,” says the curator.The latter ties in nicely with the prophet-of-doom painting.“All those centuries earlier we have Jeremiah sitting on the ruins of Jerusalem, and he doesn’t say, ‘I told you so,’” says Steinberg. “All he has left is the ‘victory of the loser,’ and Rembrandt shows him with the same anguished facial expression, with the melancholic pose.”The curator notes that it is also worthwhile paying attention to the objects placed around the tormented seer.“There are all the gifts lying around Jeremiah, which the Babylonians used to try to bribe him to join their side. In fact, Rembrandt put them in just to show everyone that he was also pretty good at depicting still life,” she points out.The exhibition “Rembrandtfrom Amsterdam and Jerusalem” also features The Dismissal of Hagar, a large oil painting by Rembrandt’s pupil Jan Victors, another by his pupil the eclectic 17th-century Dutch painter Gabriel Metsu and Portrait of an Old Man by Salomon Koninck, whose style is clearly influenced by Rembrandt.The spotlight, however, will definitely be on the Jeremiah and St. Peter portraits.“These two paintings, from his early years, already testify to Rembrandt’s singular depth and power as an artist,” notes Steinberg. “Rembrandt, from Amsterdam and Jerusalem” is on display until August 30.