Are they naked? The sheer genius of this Israeli body artist

For the past few weeks, Ram has been traveling up and down the country, from the Dead Sea to Masada, Caesarea, Tel Aviv and the Galilee. 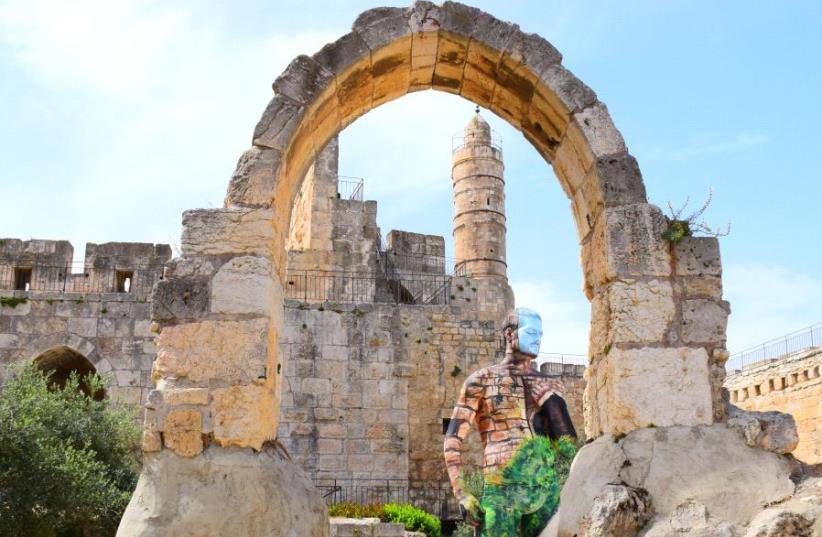 Body painting by Israeli artist Avi Ram
(photo credit: MARC ISRAEL SELLEM)
Advertisement
If you stand at just the right angle, Avi Ram’s artistry almost disappears. And that’s the whole idea.The 31-year-old artist is finishing up a tour around Israel, painting models at 12 sites to create his signature camouflage scenes for an upcoming calendar.Though Ram has lived in Florida for almost a decade, “Israel is very important to me,” he said. “[I knew I wanted] to come to Israel and create a project and show the most amazing locations in Israel and to bring art into it.”Speaking to The Jerusalem Post on Thursday next to the Tower of David, where he created his final work of art for the calendar, Ram explained how he got into the world of body painting.

“It all started when I moved to Florida and everyone just wants to get naked!” he joked.He started doing work for clubs and special events and fashion shows, and has focused on body painting for the past seven years.Then, in 2015, he appeared on the second season of the reality TV show Skin Wars, where he came in second place among stiff body painting competition.“That’s when it started changing my life,” he recalled.“It opened so many doors and a lot of people just want to work with me and take me all over the world.”Ram, who is self-taught and goes by the moniker “Airbrush Hero,” started out as a spraypaint artist, and does a lot of wall murals in addition to human bodies.“Humans are a very fun canvas to work with because it’s not flat, it’s very curved,” he said. “You have to think, since the body is curved, how to make lines straight. It’s very challenging, but it’s fun.”

Though he’s based in the US, Ram’s Israeli identity has always been front and center. That was what inspired the calendar, which he is hoping to publish himself for 2018.“On the reality show I was representing Israel, so I was talking about Israel a lot – that my family is in Israel, also my work was about Israel,” he said.For the past few weeks, Ram has been traveling up and down the country, from the Dead Sea to Masada, Caesarea, Tel Aviv and the Galilee.He wants the art form to be better known in Israel, which he said is currently not the case.“In Israel, body painting is not yet known,” he said “When we were doing the project outside [this month], we inspired a lot of people, a lot of people were asking questions – so it was fun to do here.”

Another amazing day of body paintig camouflage in Israel ... and we met the best DJ ever @offernissimofficial Model - @sassizemach