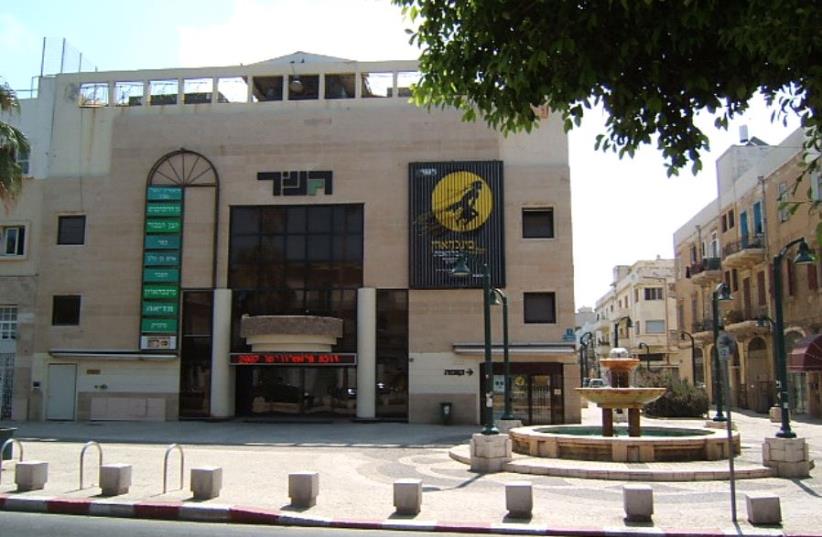 Gesher Theater in Jaffa
(photo credit: EYAL72/WIKIMEDIA)
Advertisement
■ IN THE early 1990s, Yevgeny Arye, together with a group of other Russian immigrants, founded the Gesher Theater, which has won acclaim and numerous awards and secured its place of prominence in Israel’s theater world. Gesher, which is Hebrew for bridge, set itself the challenge of bridging the various cultures and languages in Israel, and its performances are always accompanied by subtitles to enable everyone in the audience to understand what is happening on stage. Arye has remained Gesher’s artistic director and moving spirit. During one of his visits to Israel, Russian President Vladimir Putin in June 2012 was feted at a state dinner hosted by then-president Shimon Peres. Entertainment for the evening was provided by members of the Gesher Theater singing in Russian and Hebrew. Putin happily sang along with them. Earlier in the day, the Russian president visited the Western Wall. It was his third visit to the holy site, and his remark at that time is very pertinent today when UNESCO and the Palestinian Authority are denying Israel’s claim that Jerusalem is among the most important aspects of the ancient Jewish heritage. Putin said at the time: “You can see how the Jewish past is engraved on the stones of Jerusalem.” But back to Gesher which this month is having a number of productions with subtitles in English, the most immediate of which is on March 17; a new interpretation of S. Ansky’s classic play The Dybbuk, followed on March 18 by The Tunnel, a satirical comedy about the absurdity of war and the relationship between politics and the media. The Gesher Festival continues on March 19 with Falling Out of Time, based on the novel by David Grossman, and on March 21 with I am Don Quixote, adapted from the novel by Cervantes. The King David Report follows on March 22. Outside its Jaffa-based theater, Gesher will participate in an event at the Tel Aviv Museum of Art on a date to be announced in a performance that will give a new perspective on the life of artist Andy Warhol. On that occasion, the Gesher ensemble will be directed by Michael Kramenko.■ THERE WERE no government ministers at the recent graveside ceremony on the first anniversary of the death of former Mossad chief Meir Dagan. However, it is anticipated that there will be at least one minister – Defense Minister Avigdor Liberman, at the Meir Dagan Memorial Conference on Security and Strategy which will be held at Netanya Academic College’s S. Daniel Abraham Center for Strategic Dialogue on Tuesday, March 21. Also scheduled to attend are current Mossad chief Yossi Cohen and Chief of Staff Gadi Eizenkot.■ QUITE A number of soldiers, whether married or single, leave frozen sperm samples as a sign of their desire for continuity in the event that they are killed in the line of duty. Sometimes there is a legal dispute as to whether such samples can be used. This can be particularly heartbreaking when the parents of a soldier want a grandchild, but his wife does not agree. The court usually considers the wife before the parents. But even in the cases of unmarried soldiers, it is often difficult to get the courts to agree.Ludmilla Roszkov, a 63-year-old widow from Kiryat Shmona whose only son, 25-year-old German, a Nahal officer, was killed in an anti-terrorist operation 15 years ago, fought for nearly all that time to be allowed to use his frozen sperm. After finally receiving a green light, she realized her dream and now has a two-month-old granddaughter by the name of Gal Veronica. The surrogate mother was Roszkov’s neighbor Irena Axelrod, 43, who has a 13 year old son of her own, and who was delighted to be able to help. The baby bears a remarkable resemblance to her father.■ TENS OF thousands of people congregated last Friday in Tel Aviv’s Hamedina Square for a Purim rave that included a DJ, plus performances by Ivri Lider, Tomer Maizner, Vini Vici, Ella Gutman, Funky Fish, Uria Kelpter, and Spikes. Many of those attending came in fancy costumes which added to the carnival atmosphere of the occasion. There were also plenty of food and drink vendors to ensure that the crowd was neither hungry nor thirsty, but several vendors of alcoholic beverages were arrested for selling such drinks to minors. There were also arrests for theft.■ FOLLOWING THE death of their son and brother Adam in 1991, Austen and Jennifer Science of Herzliya, together with their daughter Lisa, and Adam’s friends and colleagues, established a room in Adam’s name in the Gesher building at 10 King David Street in Jerusalem.Gesher has relocated its operations and is now headquartered at the Hibba Center, 75 Herzog Street, Jerusalem, where a rededication service in Adam’s memory will take place on Sunday March 19 at 3 p.m. conducted by Rabbi Benji Levine and Cantor Naftali Hershtik.