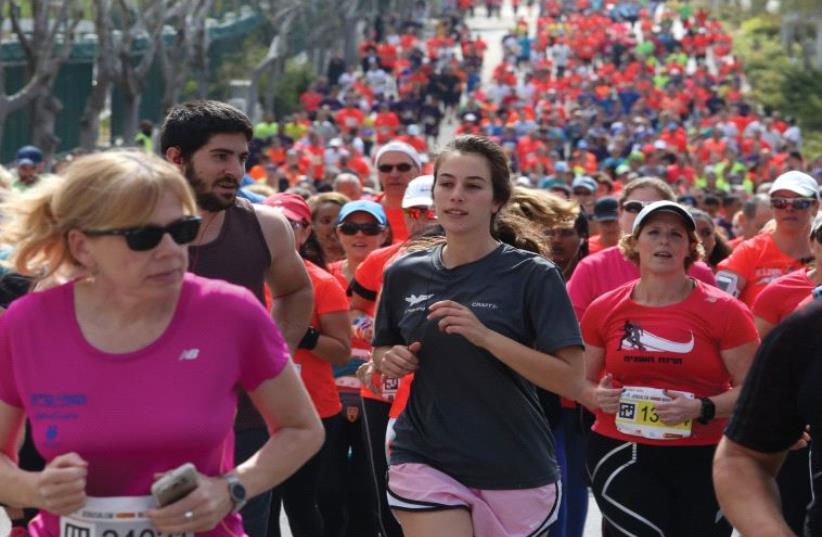 The Jerusalem Marathon
(photo credit: MARC ISRAEL SELLEM)
Advertisement
JUST A month shy of his 70th birthday, Zvi Ledder, a returning Israeli who spent many years in Australia before coming home, participated in the Jerusalem Marathon together with his daughter Ronnit. She completed the half-marathon, whereas her father completed the full marathon, at the end of which he was either walking at a fast pace or jogging. At the finish line, there was a group of five people waiting for him. They were from Sport Habira, and they presented him with a trophy “for determination and perseverance,” even though he was the last to cross the line.It was definitely a case of when the going gets tough, the tough get going. It would have been easy for Ledder to drop out, but he was absolutely determined that nothing would stop him from going all the way – and that determination was duly recognized not only by Sport Habira but by radio and television reporters who were keen to interview the last person to cross the line.EVERY ISRAELI political leader wants to meet with Jason Greenblatt, who is US President Donald Trump’s special representative for international negotiations, especially those between Israel and the Palestinians. Some met Greenblatt during his visit to Israel earlier this month, and others caught up with him in Washington over the past week.Among the latter was Jerusalem Mayor Nir Barkat, who met with Greenblatt in the White House and came away saying that Greenblatt is a true friend of Jerusalem. That does not necessarily mean that Greenblatt will push for the US Embassy to move to Jerusalem. Although Barkat has not disclosed what was said during their conversation, it stands to reason that the issue was raised by Barkat, who has been advocating the move.It’s something that is also dear to the heart of US Ambassador- designate David Friedman, who is convinced that Trump, unlike his predecessors in office, will follow through with his promise to move the embassy. Meanwhile, Friedman intends to spend as much time as possible in Jerusalem.A FEW days prior to the death this month of Nat Leibler, who lived into his mid-90s, his 80th great-grandchild was born. The baby is a boy, and the circumcision ceremony was held during the shiva. The baby was given his great-grandfather’s name, so in the cycle of life, a Nat Leibler went to his eternal rest and a new Nat Leibler came into the world. The baby has two great-grandmothers and both sets of grandparents. One of the baby’s other great-grandmothers, the late Elsa Leibler, a Holocaust survivor, used to say every time she was blessed with a new grandchild or great-grandchild that this was her revenge on Hitler. But it’s more than that. It gives credence to the story of Adam and Eve, who are the ancestors of all humanity. If, in a span of 70 years, Nat and Elsa Leibler could have such a large progeny, there’s no reason to doubt the size of the progeny of Adam and Eve after several thousand years.ALTHOUGH HAIFA is the main center of Baha’i activities in Israel, there has been a Baha’i presence in Jerusalem for more than 20 years. The longest-serving Baha’i couple to live in Jerusalem are Kern and Barbara Wisman, who have also been very active in Rotary, in interfaith and diplomatic circles, and who have amassed a huge number of friends.No one expected them to be leaving at any time in the foreseeable future, but at the Baha’i New Year celebrations at the David Citadel Hotel, it was announced that they will be returning to the United States in the summer.Quoting in Hebrew from Ecclesiastes, Kern Wisman said, “To everything there is a season,” and then, switching to English, added: “and our season has come.” Barbara Wisman, who seldom says anything in Hebrew, made the effort on this occasion and thanked guests for their friendship, which she said would remain very deep in their hearts.People later crowded around the Wismans to assure them that they would be missed and asked them to remain in touch.