A round-up of news around the nation. 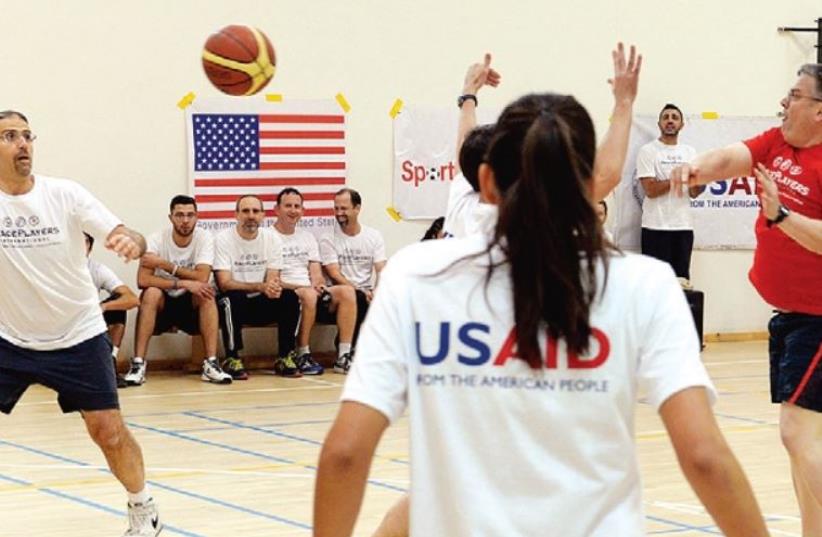 Israelis, Palestinians and American diplomats take part in Peace Players
(photo credit: COURTESY US EMBASSY)
Advertisement
■ US AMBASSADOR Dan Shapiro, US Consul-General Donald Blome, USAID West Bank and Gaza Mission director Dave Harden and other US senior staff last weekend joined a group of Israeli and Palestinian youth basketball players from Peace Players International, funded by the US Agency for International Development and the State Department, along with employees from the US Embassy, US Consulate General and USAID mission. They came together in Kfar Shmaryahu for a special game of basketball aimed at promoting peace and understanding among Israelis and Palestinians. It was not the first time that Shapiro had played basketball in a game organized by PPI.Israelis, Palestinians and Americans, both girls and boys as well as the participating adults, were split into mixed teams, and played a friendly yet competitive game of basketball for a common goal of respect and sportsmanship. This marks the third consecutive year that PPI hosted a game of this kind.Liraz Ben-Yosef, who took part in the game, said: “Peace Players changed my life, my perspective, my thoughts. It’s like a second family for me. I think it’s very important that we see each other as human beings. Despite the conflicts, we are the proof that Israelis and Palestinians can get along together.”Shapiro enthused: “It is always a pleasure and an inspiration to play basketball with the great kids of Peace Players – who insist on being friends and teammates, despite all the difficulties. They give us a terrific lesson in recognizing the common humanity of others no matter what their background.“These kids will always have the support of the US Embassy, US Consulate General, and USAID. We are proud to support these types of programs that bring Israelis and Palestinians together to promote friendship and understanding, especially during these turbulent times.“Sports are a universal language, and I’m very happy to see them all speak the same language today. And, wow, these kids can play!” Blome said: “On the court, these are all kids. It’s funny that something as simple as a basketball game can bring together young people who would never cross paths otherwise. Basketball won’t solve all the problems, but it is helping this group of young people to understand their shared humanity and to hope that someday things will change.”
■ THE JEWISH Agency, UJA-Federation of New York, the Jewish Federation of Greater Washington and the Israel Venture Network are about to pose serious competition for supermarket king Rami Levy.Inspired by the “cottage cheese” social justice protests of 2011, the above-mentioned enterprises have joined forces to create a discount supermarket co-op chain, Tzarchaniyat Ha’ir (CityMart), which officially opened its doors at 15 Brit Am Street in Sderot this past Monday, with the participation of Natan Sharansky, chairman of the executive of agency; Benny Levin, IVN vice chairman and co-founder of NICE Systems; Alon Davidi, mayor of Sderot; Uri Leventer-Roberts, executive director of UJA-Federation of New York’s Israel office; and Dr. Omri Yadlin, president of Sapir Academic College, and representatives of the Sderot community.CityMart is a multimillion-dollar initiative of the above-mentioned enterprises.In addition to the large Sderot store, a second branch is planned for Arad later this month, with the aim of opening additional stores in 2016. The aim is to open 10 new stores each year and a total of 40 within the next four to five years.The co-ops will provide a low-cost shopping alternative in socioeconomic-challenged communities in the northern and southern periphery, and will offer everything from fresh produce to dairy products to packaged goods at deeply discounted prices.CityMart will monitor local prices and ensure that every item beats the competition.The chain will be able to discount goods because it will source its stock from smalland medium-sized producers, supplied through area distribution centers, and rely on local goods as much as possible. CityMart will also operate a buyers’ club, whose members will receive an additional 15 percent price discount.CityMart will operate as a nonprofit social venture, with all its earnings going toward opening additional branches, lowering prices even further, and fostering communal activities and social change. Young social entrepreneurs and change activists will be recruited to lead local activities.Apropos Levy, who recently added some of the stores from the financially ailing Mega chain to his stable, as adamant as he was about fairness when he refused to dismiss Arab staff from his stores, he is less liberal when it comes to unionization, and has allegedly threatened to fire troublemakers who want to unionize.
Advertisement
Subscribe for our daily newsletter