Read all about the Women's Conversation, it includes 130 trailblazing women. 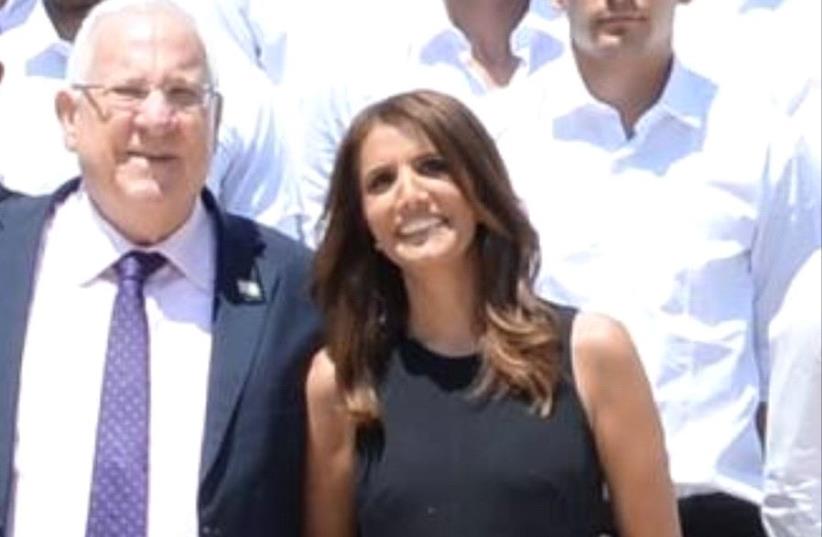 President Rivlin and Alona Barkat
(photo credit: MARK NEYMAN / GPO)
Advertisement
LOOKING BACK at the recorded history of the Zionist movement and the State of Israel, most researchers might think that women were barely involved. In fact, they were much more engaged in building the foundations of community and civilized society than is generally known.Someone who passionately believed in the roles that women played in Petah Tikva is researcher Ayelet Cohen, a former member of the Petah Tikva City Council who, with the help of a group of volunteers, began digging for information about what women initiated in the late 19th and early 20th centuries. They came up with the intriguing stories of 130 trailblazing women.Cohen had no problem persuading former Petah Tikva mayor Itzik Ohayon to support such a project, and current Mayor Itzik Braverman was equally supportive. He did so wholeheartedly and made available an old building that had been marked for preservation. It has now become the women’s museum or, as Cohen prefers to call it, The Women’s Conversation. The museum at 3 Montefiore Street, which was renovated at municipal expense and opened in May, is believed to be the only one of its kind in Israel. THIS WEEK Tadiran CEO and controlling shareholder Moshe Mamrud and Alona Barkat, the owner of the Hapoel Tadiran Beersheba soccer team, which won the national cup last season, signed a contract for Tadiran to sponsor the team for yet another season. Hardly surprising, considering that Mamrud is a longtime fan of the team and that it’s always wise to back a winner.In addition to giving its backing to the team for the 2017- 2018 season, Tadiran will expand its activities with and on behalf of the team, especially with regard to marketing.Barkat said that the partnership between Hapoel Beersheba and Tadiran, as well as with the Mamrud family, had been an excellent one, and she was happy to have it continue. JUST AHEAD of the summer vacation for schools and kindergartens, Yaniv Kumari, the director of the Pereg Kindergarten, and Hofit Shmulewitz, the director of the Snunit Kindergarten, which are both in Ra’anana, wanted to teach the tiny tots in their care about the meaning of a wedding. The two, who were born and raised in Ra’anana and are due to get married in September, wanted the pre-schoolers to share in their happiness and to understand what a wedding was about in terms of two people committing to each other. So they held a mock wedding in which Shmulewitz was partially dressed as a bride, complete with veil, and the youngsters each had a role, including one who was given the part of the officiating rabbi. The youngsters won’t be invited to the couple’s real wedding, but the prospective bride and groom promised that if and when the family expands, they will be notified.JUST BEFORE giving birth to her third child, Alex Kleinstein, the wife of singer, composer and musician Rami Kleinstein, was admitted to the Tel Aviv district of the Israel Bar Association. Kleinstein has two daughters from his previous marriage to singer Rita. Their elder daughter, Meshi Kleinstein, is a stellar performer in her own right.The baby boom in the entertainment industry is quite amazing, almost like a revolving door as one couple emerges from a maternity ward with Daddy carrying or wheeling the newborn, just as another pair of celebrities goes into the maternity ward to wait for an addition to the family. Singer Shiri Maimon and her husband, Yoni Rejwan, emerged from Ichilov hospital this week with their second son; and television personality Yarden Harel is in an advanced stage of pregnancy with her sixth child. She was already the mother of a young son when she married fellow television personality Oded Menashe. Since their marriage, the two have become religiously observant, a factor that may play a role in their burgeoning family.