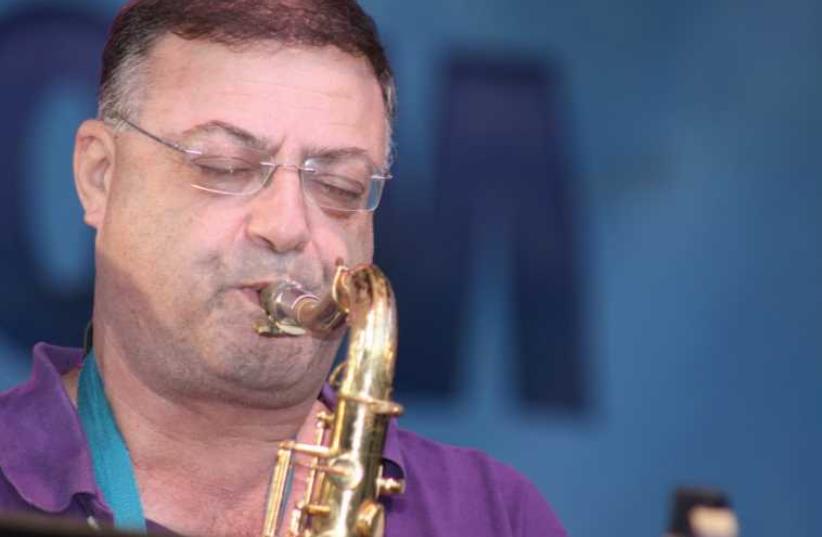 Amikam Kimmelman
(photo credit: PR)
Advertisement
Veteran Israeli jazz saxophonist and educator Amikam Kimmelman has brought over quite a few fellow professionals from foreign climes in recent years, but not too many of them have hailed from Romania. He will set that to the rights next week when pianist Petrica Andrei joins him and his quartet for four gigs at various venues around the country from May 20 to 23.The audiences are in for an amorous sonorous time as the fivesome rips into some of the most romantic jazz standards around, with the suitably named Love for Sale program. The titular Cole Porter classic song features in the repertoire, along with a host of other chestnuts from a veritable jazzy Aladdin’s cave written by the likes of George and Ira Gershwin and Nat King Cole and performed and recorded by jazz titans such as Ella Fitzgerald, Billie Holiday, Miles Davis and Duke Ellington.Andrei’s music is deeply rooted in the jazz tradition, and his keyboard work feeds off a lyrical sound and touch. The 40-year-old Romanian has garnered a slew of awards over the years, such as first prize in the Martial Solal piano competition in France and the Sibiu Jazz Festival in Romania, and has appeared at international festivals in Paris, Vienna, Lisbon, Berlin and Barcelona, Brussels and Bucharest. To date, he has three CDs to his name as leader and has collaborated with a diverse range of fellow artists from around the world, including stellar French accordionist Richard Galliano, American drummer Barry Altshul and German big band leader Peter Herbolzheime.Andrei got an early start to his musical studies and began piano lessons at the age of five. He soon acquired a solid quality platform for his burgeoning skills and enrolled at the Music Academy of Bucharest, studying both classical and jazz piano.However, when he started out, the communists still ruled the roost in Romania. Throughout the Soviet era, jazz – as an American art form – was generally considered to be an out-and-out evil, even though there were some years when the Soviet regime looked slightly more kindly on the improvisational musical genre.Like the majority of his compatriots, Andrei is now happy to be living in a more democratic regime, not least because it allows him more freedom of artistic expression, not to mention the ability to travel abroad and perform around the world.“The jazz scene in Romania is a lot better than it was during the communist era,” he observes. “I hope it continues to develop and improve.” There are a number of jazz clubs dotted around Romania, principally in Bucharest, and there are nine major jazz events that take place during the year, such as the annual Bucharest International Jazz Competition and Festival, which takes place next week; the Jazz in the Park Festival, which takes place in Cluj in July; and the Ciuc Jazz Festival at Miercurea Ciuc in the northeast of the country.Communist-era radio listening and record acquisition constraints notwithstanding, as a youngster Andrei managed to get into the sounds of such innovative fellow pianists as American masters Herbie Hancock and Keith Jarrett, now in their 70s and icons in the field.“I mostly listened to piano players,” notes Andrei.He says he is delighted to be coming over here to throw in his musical hat with Kimmelman and sideman trombonist Jonathan Volchok; Australian-bron double bass player Simon Starr; and veteran drummer Rony Holan. He says he is perfectly happy to spin pit his own renditions of some of the best-known jazz standards.Andrei also writes his own music, and that forms the backbone of his discography to date.Local folk music also left its mark on the young Andrei’s early musical evolution, and he says he also got into some material from this part of the world.”I am familiar with Jewish music,” he notes, adding that Jewish songs often ring out on his own domestic patch.”My wife is a vocalist, and she performs well-known Jewish songs as well,” he says.The Andrei-Kimmelman Quartet confluence should prove to be a fun and entertaining experience for fans of classic mainstream jazz, although the concert organizers say that the shows ”will present the standards with new virtuoso, energetic, as well as lyrical arrangements in a one-time musical encounter.”So it might be best not to get too comfortable when the Romanian and his Israeli counterparts take the stage.