A news round up from across Jerusalem. 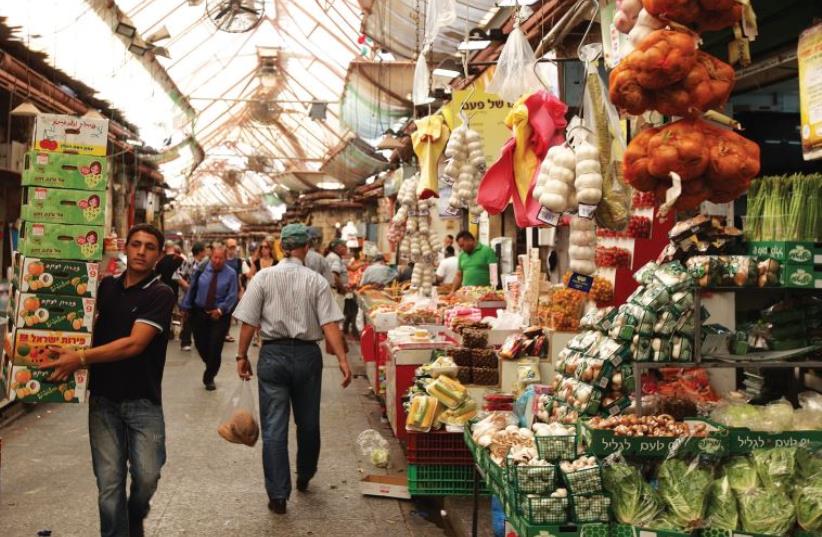 The Mahaneh Yehuda market in Jerusalem – the beating heart of Israel’s capital
(photo credit: MARC ISRAEL SELLEM/THE JERUSALEM POST)
Advertisement
► EVERY YEAR, Maureen Kushner, originally from New York and for many years a resident of Jerusalem, hosts a party in her penthouse apartment in Mahaneh Yehuda to celebrate the Birthday of the World.The party is held just in advance of Rosh Hashana and includes talks by various rabbis such as Rabbi Ya’acov Nana of Mount Zion and David’s Tomb, and Rabbi Mordechai Machlis, who is known far and wide for his generous, heartfelt hospitality. The music is invariably in the Shlomo Carlebach tradition, and is provided by Shariya Witt and other lovers of Carlebach’s melodies. The event also includes a reading from the Book of Genesis, and guests who are musical are asked to bring a musical instrument to add to the joy of the occasion. Because Kushner’s apartment is so small, this year everyone went up to the roof and sang, played, and swayed to the music. There was also some shofar blowing, given the fact that Rosh Hashana was on the immediate horizon.Regulars at Mahaneh Yehuda market are used to hearing Carlebach’s music emanating from Kushner’s roof. She hosts a Rosh Hodesh celebration every month the same spirit. The difference is that at night she has some competition from other musical events in the market, but the Rosh Hodesh get-togethers are in the morning, when there is no competition, and passersby often stop in their tracks just to listen. The Rosh Hodesh events are for women only, with the singing of the whole of Hallel, whereas the birthday to celebrate the creation of the world is for both men and women.
► IT WAS definitely a family affair at the Hazvi Yisrael congregation on the last Saturday before the New Year. Prof. Adrian Becker, an internationally recognized expert in orthodontics read the morning service, one of his sons, Josh, read the Haftara, and another son, Joel, conducted the Musaf service. It was all in honor of the anniversary of Josh’s marriage to Nomi Werbeloff. Josh left Jerusalem some years ago for London, where he works as an actor. Nomi is from Ra’anana and is doing post-doctoral research in London which is where they met. Both are originally of British descent. Josh had been a long-term bachelor when Nomi came into his life, but he knew very quickly that she was the one for whom he wanted to change his status. They returned to Israel for their wedding, which was a relatively modest affair, and the groom’s parents, Sheila and Adrian, decided to host a sheva brachot luncheon for them at the OU Center on the Saturday following the wedding, so that those friends whom they were unable to invite to the wedding could join in the celebrations afterwards.The Beckers are originally from London, and more than 90% of the guests were also Brits. A lesson on the weekly Torah reading was given by the Beckers’ daughter Rachel, and the Becker grandchildren put together a wonderful song in Hebrew and English in honor of the newlyweds. Josh and Nomi are already back in London for an indefinite period. Josh always comes home for Seder, remaining in Israel for the whole of Passover. But in future, he’ll have to toss a coin between Jerusalem and Ra’anana.
► IT’S QUITE a walk for Benji Levin, who lives in Har Nof, to get to the Ahdut Israel synagogue near Mahaneh Yehuda where he is the spiritual leader of the congregation that was once led by his grandfather, the legendary Rabbi Aryeh Levin. It’s not just the distance, it’s also the discomfort of wearing the black garb of the haredim (ultra-Orthodox) in the scorching heat of Jerusalem. Levin doesn’t mind it so much. In fact he’s happy to wear it as he passes people who are obviously secular. He always wishes them Shabbat shalom or Hag sameah, and some of the recipients of his greeting are astounded, not expecting to be addressed by someone like him. It’s yet another instance of judging a book by its cover. Levin is heavily involved in outreach, aside from which he’s a very friendly individual who likes to make people feel good and doesn’t sit in judgment against anyone.He’s simply more interested in seeing the positive side of a human being than focusing on the negative. Some people are so surprised, they don’t answer him at all, and some will almost involuntarily reply “Gut Shabbes” as if responding in Yiddish is mandatory. This amuses him greatly. On the Thursday prior to Yom Kippur, Levin welcomed a group of foreign journalists to his synagogue and told them about the history of the area and something of the religious communities who live in the area. The event was organized by Ariel Katzover of the Government Press Office, who is responsible for the haredi and religious media, and thought that it would be beneficial for foreign press reporters to familiarize themselves to some extent with the various haredi groups, their customs and where they live.