A round up of news briefs from around the capital. 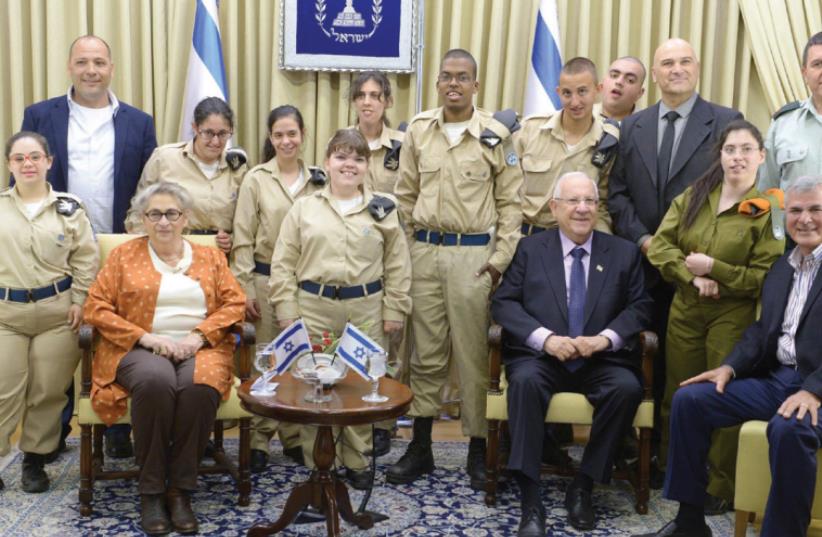 PRESIDENT REUVEN RIVLIN and his wife, Nechama, host a delegation of volunteer soldiers with special needs yesterday
(photo credit: MARK NEYMAN / GPO)
Advertisement
► PRESIDENT REUVEN Rivlin and his wife Nechama, separately and together, seem to spend more time with soldiers than with any other representative group in the country. Last Sunday night, Nechama Rivlin, together with Chanah Eisenkott, wife of the IDF chief of staff, joined some 100 lone soldiers at Beit Hehayal (Soldiers House) in Jerusalem for a festive reception to toast the new year.Several of the lone soldiers were serving in combat units in various branches of the IDF. Rivlin said she was aware that when lone soldiers return for the weekend from a week or more on base, it’s not like those who come home to families, where their mother does the laundry and puts food on the table. Lone soldiers have to do their own shopping, cooking, laundry and ironing. She added that the hardest time for them was probably around the Jewish holidays.“It’s not easy for you,” she told them, “but I think we should change the name from Lone Soldiers, because you are not alone.You are enveloped with the affection of many friends, and you have our deepest admiration and affection. I want you all to send regards to your parents and to thank them for raising you the way you are, with a high sense of values, a love for the people, the State of Israel and Zionism, as well as with a sense of compassion for the weaker sectors of society and a degree of maturity.”This was the time to bless every soldier in the IDF for his or her contribution to national security, she said.Eisenkott said that as the mother of five soldiers – two doing their required service, and three in the reserves – she welcomed the opportunity to thank soldiers who had willingly taken up a powerful challenge to serve in the IDF.“You are deserving of every commendation for your desire to defend the state and people of Israel,” she said.Maj.-Gen. (res) Yoram Yair, chairman of Together for the Wellbeing of Israel’s Soldiers, said it was very moving to see soldiers from 80 countries coming to link themselves with Israel.“I hope we can give you back something of what you have given us,” he told them.There are currently 6,400 lone soldiers serving in the IDF. Fifty- five percent are in combat units, and 54% have decided to make their permanent home in Israel.► IN A Channel One value-for-money survey broadcast this week, not only were discount king Rami Levy’s supermarkets the least expensive, there was a 30% difference in price between them and Shufersal Sheli, the most expensive supermarkets. Not content with a nationwide chain of supermarkets, Levy this week opened an NIS 250 million shopping mall in Mevaseret Zion in partnership with lawyer Adi Sudai. The mall will be a boon to shoppers not only from Mevaseret, but also from the surrounding area, who will save themselves a trip to Jerusalem or Modi’in when they want to do some serious shopping. Though very popular with the locals, the nearby Harel Mall, which has served the community for many years and boasts Israel’s first kosher McDonalds, is not as large as the new mall, which has three floors of commercial space and parking space for 500 vehicles.► THE HIGH Holy Days are big money-makers for most synagogues, which charge for membership and/or seats. But Rabbi Yisroel Goldberg, director of Chabad of Rehavia, doesn’t believe that people should pay to pray. If someone wants to give a donation to the synagogue in honor of the High Holy Days or for any other reason, that’s fine, but imposing a charge when there are many people who want to attend services but can’t afford to pay is something that Chabad, as a Jewish outreach organization, refuses to do.For this reason, Goldberg, as in previous years, put out a notice on email and the Web: “We saved you seat,” promising anyone who wants to participate in Rosh Hashana services a warm, friendly environment.Chabad services are held in the basement of the Great Synagogue, whose acting president, Zalli Jaffe, and chairman, Asher Shapiro, have made the premises available, because Chabad’s own premises around the corner are too small. What this means, essentially, is that under the one roof, there is an Ashkenazi Orthodox service, a Sephardi Orthodox service and a Chabad service, with people from all three mingling in the spacious lobby afterwards.