It was only after the two judokas claimed bronze medals at the Summer Olympics that they transcended their sport to become household names. 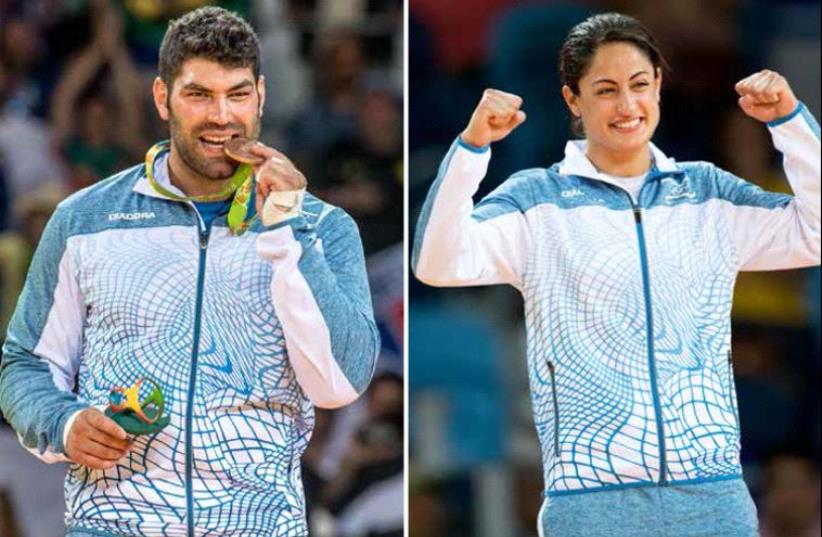 Yarden Gerbi and Ori Sasson
(photo credit: ASAF KLIGER)
Advertisement
Some of the most influential people in sport are Jews. Several won gold medals at the highlight of the past sporting year – the Olympic Games in Rio. But it was Israel’s two judo medalists who struck a special chord with Jews and Israelis across the world.Yarden Gerbi was a former world champion, and Ori Sasson a two-time medalist at the European Championships.But it was only after the two judokas claimed bronze medals at the Summer Olympics that they transcended their sport to become household names.Israel had to wait just under eight years or, to be more precise, 2,991 days for a first Olympic medal since Beijing 2008, which arrived when Gerbi claimed a bronze in the women’s under-63 kg. class in Rio.It took just four more days for Sasson to emulate the feat, taking bronze in the men’s over-100 kg. event.When Gerbi was three, she saw judoka Yael Arad win Israel’s first Olympic medal on TV, claiming a silver at Barcelona in 1992. Gerbi asked her mother: “How can I buy a ticket to the Olympics?” Almost 24 years to the day after Arad made history, it was Gerbi’s turn to go down in Israeli sporting folklore. She was under intense pressure to scale the Olympic awards podium since she became the first Israeli to be crowned world champion in 2013.Gerbi may excel in a combat sport, but Israel couldn’t have asked for a better role model. She showed she is a class act off the mat as well, raising NIS 196,000 for children fighting cancer by auctioning the signed name tag that appeared on the back of her Olympic uniform in Rio. The proceeds went to the Dana Children’s Hospital at the Sourasky Medical Center in Tel Aviv.Jews and Israelis everywhere were captured by Gerbi’s charisma, which is something that can equally be said about Sasson.Not that long ago, Sasson wasn’t even considered the best judoka in his family.That title went to his brother Alon, five years his senior and a former junior European champion. Alon was one of the main reasons Ori found himself competing in judo, and four days after Gerbi’s triumph, Sasson claimed Israel’s ninth Olympic medal in all, and second in Rio.With the Summer Games, Gerbi and Sasson joined Arad, Oren Smadja (Bronze/Barcelona 1992), Gal Fridman (Bronze/Atlanta 1996; Gold/Athens 2004), Michael Kolganov (Bronze/Sydney 2000), Arik Ze’evi (Bronze/Athens 2004) and Shahar Zubari (Bronze/Beijing 2008) on arguably the most prestigious list in Israeli sport.Sasson also earned praise from Prime Minister Benjamin Netanyahu for his handling of Egyptian opponent Islam El Shehaby in the first round in Rio. Sasson attempted to shake hands following his win, only to be rebuffed by the Egyptian.“Every boy and girl saw not only a great athlete, but a man with values,” Netanyahu told Sasson. “You showed the true face of Israel, its beautiful face.”