By MICHAEL EISENBERG
DECEMBER 17, 2014 18:02
Hippos mountain
(photo credit: MICHAEL EISENBERG)
Advertisement
JPost Holy Land is a new column that will bring you the latest archaeology news and stories from Israel in collaboration with the University of Haifa.

It was Josephus Flavius, the famous Jewish-Roman historian, who told us the forthcoming of the Jewish minority in the pagan Roman city of Antiochia Hippos during the Great Revolt in the Galilee (66-67 CE). Hippos, one of the Decapolis, was the major polis east of the Sea of Galilee, set upon Sussita Mountain crest and overlooking the Jewish city of Tiberias on the western side of the lake.
Josephus tells us that during the Great Revolt the Hippos Region was severely ravaged by the Jewish rebels though they could not have overtaken the highly fortified city itself. In return, Hippos citizens jailed the small Jewish community living among them. Nevertheless, if we put aside the tragic events of the Great Revolt and keeping in mind the cultural differences and fishing disputes over the lake, most of the time Hippos and Tiberias lived peacefully among themselves, having a short marine route between the two.
From historical and epigraphic sources we learn that the Jewish community at Hippos continues to exist during the Byzantine Period when it became a bishop seat. After excavating as many as five Byzantine churches (sixth-seventh century CE) and surveying at least another two, we decided it is about time we locate the synagogue of Hippos (Sussita by its Aramaic name) which must have served the Jewish minority. The most logical place to locate it would have been towards the western slopes, within the living quarters and overlooking Jewish Tiberias. It would have been essential to the Jews of Hippos to receive the beacon signs from Tiberias to know when the new lunar month would begin. But how exactly do you locate a ruined and unnoticed structure among the debris of hundreds of structures buried in time following the devastating 749 CE earthquake?
It was a small and very enthusiastic group of local Israeli volunteers who encouraged if not to say forced us to this "search-and-dig mission." The late Zvi Ilan claimed to have found the synagogue of Sussita following a survey held in 1988 just after the mountain was set on fire and the lack of vegetation allowed a clearer observation of the ancient remains. Lead by some of Ilan's survey team, the Graicer's, Miri and Shlomi, we were promised "don't worry, we know where it is. You bring the professionals, we bring the volunteers". Well, it wasn't that simple. "Two Jews, three opinions"; neither pointed to the same location. Eventually after some debates we picked up the most promising point. Quickly I became a persona non grata in this excavation area after claiming it looks like an IDF mortar position.
Just after a single excavation day the surprise appeared; about a third of a basalt lintel depicting an eagle holding grapes vine and perhaps a snake. The artistic style and symbols are to be almost a sure identification with Jewish ones, hence apparently part of synagogue's lintel. You have to be so lucky after one excavation day to find the exact item you were looking for. Now my presence there became even less wanted. 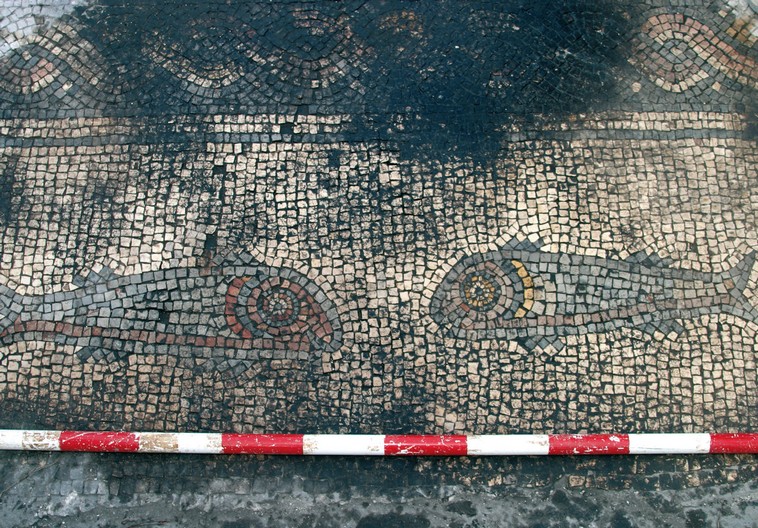 After a few additional excavation days I got a call on the Hippos radio – "Michael you better come." The veteran group was standing with a huge smile on their faces pointing towards the ground. Two column drums vertically in-situ had just been exposed which meant there was a public building there and those were the columns which used to hold the roof. Jewish lintel + public building = synagogue (?). I had to clear my throat and retire silently to the other excavation areas.
After a couple of days a colorful mosaic floor and the apsis of a church were exposed. We declared that it is a church and not a synagogue and it served as a mortar position as well. The apsis, always built towards the east, only naturally served as a mortar position against what was back then the Syrian border to the east.
The veterans were stubborn; "so the church was built above the synagogue!" So we've decided to lift a segment of the mosaic floor and find out. No, no remains of the synagogue have been found here but at least we were able to partially unearth the southwest church and date it. It was totally burnt during early 7th century and never rebuilt. It could be related to the Persian conquest of the region at 614 CE. 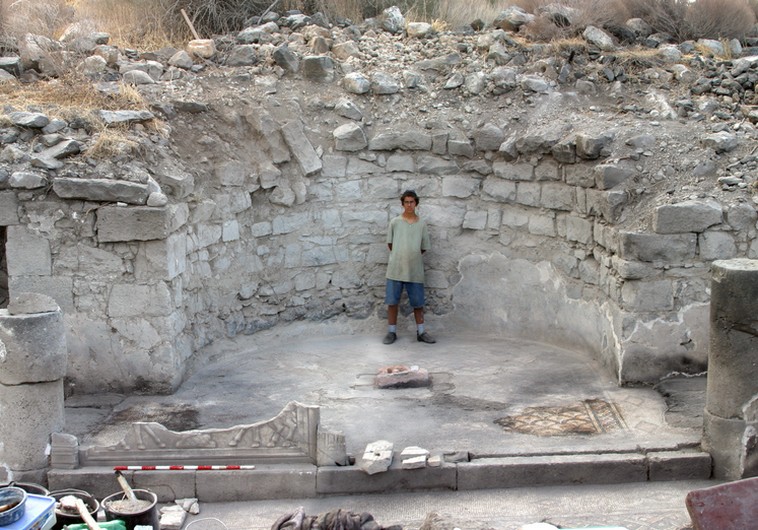 No doubt there is at least one synagogue at Hippos-Sussita. Where exactly is it we don't know but I am sure it will be revealed one day.
Hippos-Sussita Excavations Project is an international enterprise affiliated with The Zinman Institute of Archaeology at the University of Haifa. We warmly welcome participants to join us at this scientific and romantic search of the past: http://hippos.haifa.ac.il
Dr. Michael Eisenberg is the director of the Hippos excavations project, a senior researcher at The Zinman Institute of Archaeology and a senior lecturer at the Department of Archaeology, University of Haifa.
Advertisement
Subscribe for our daily newsletter