When we internalize and understand that all of life’s trials and tests are there so that we can use them as an impetus to become better, life takes on a brighter outlook. 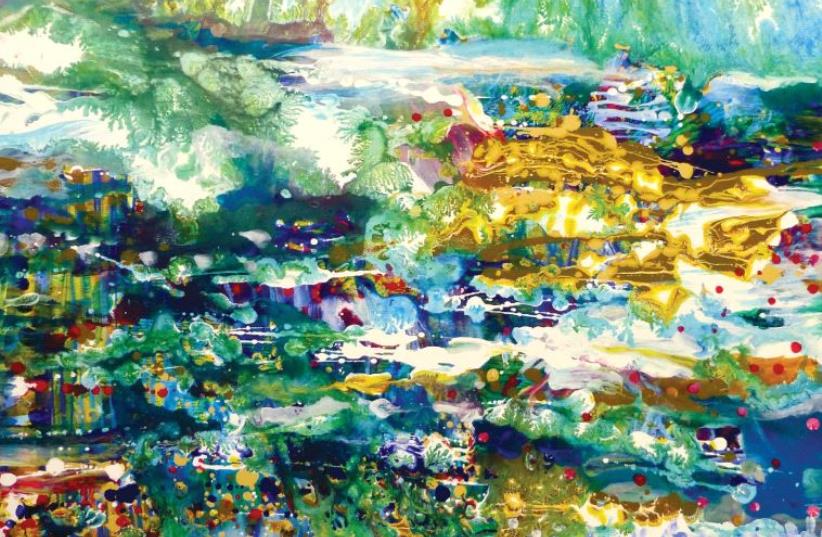 Painting by Yoram Raanan
(photo credit: YORAM RAANAN)
Advertisement
In this week’s portion, Ekev, Moses continues delivering his monumental speech to the people of Israel before his death. The speech is peppered with deep messages on Jewish philosophy and tools for proper and wise functioning in our daily lives.Everyone faces difficulties in life. Some people face financial challenges, others relationship troubles, and still others face health issues. When we examine several verses in this week’s parasha, we find that Moses our Master provided his people with a different perspective on the tribulations they suffered on their journey through the Sinai Desert on their way from Egypt to Israel.“And you shall remember the entire way on which the Lord, your God, led you these 40 years in the desert, in order to afflict you, to test you, to know what is in your heart, whether you would keep His commandments or not” (Deuteronomy 8: 2).When reading the verse superficially, we understand that God brought afflictions on the people of Israel in the desert in order to test them and check their loyalty to Him. Would they follow Him in the desert, even when their bread did not fall from the sky, or if water would not come out of the rock? Would they trust Him and embark on this journey, even if they were unsure if they would have food or water? Rabbi Ovadia Sforno (an important 16th-century Italian commentator) provides us with another take on the concept of “test.” He explains the words “to test you, to know what is in your heart” as: “that what is in your heart goes from theory to practice,” meaning: We all have both good and bad strengths within us. Even if we know that when these strengths collide, the good will overcome the bad, until that happens in practice, this goodness will not become part of reality.Only after we have overcome a challenging period, without harming our surroundings or our spiritual level, can we look back with satisfaction and feel the sweet sense that the good in our hearts managed to raise us higher on the path toward complete goodness.There are those who say that the root of the Hebrew word for “test” (nisayon) is nes, meaning a high pole. It is the test that elevates the person.This is demonstrated even more clearly in the verse immediately following: “And He afflicted you and let you go hungry, and then fed you with manna... so that He would make you know that man does not live by bread alone but, rather, by whatever comes forth from the mouth of the Lord does man live” (ibid. 8: 3).After the people of Israel were hungry for bread, they received the manna, that same bread that fell from the skies. Only then could they wholly grasp that human life is not based only on material sustenance, bread, but rather is always dependent on “whatever comes forth from the mouth of the Lord.”The Torah continues: “Your clothing did not wear out upon you, nor did your foot swell these 40 years” (ibid. 8: 4).The Talmud (Yoma 76a) talks about Rabbi Shimon Bar-Yohai’s students asking him: Why didn’t the manna fall once a year for the entire year? The rabbi answered them with this parable.To what is this similar? To a flesh-and-blood king who had one beloved son. At the beginning the king determined that his son would get everything he needed once a year for the entire year. As a result, the son came to see his father once a year. So the king changed his directives and ordered his son to get what he needed every day, for that one day. Thus the king caused his son to see him every day.Bar-Yohai explained to his students that this is how it was with the people of Israel in the desert. Everyone worried about tomorrow’s bread. A man who had a few sons would worry every day and say: What if the manna won’t fall tomorrow and everyone will die? As a result, the people of Israel constantly focused on their Father in Heaven.We are the same. When we internalize and understand that all of life’s trials and tests are there so that we can use them as an impetus to become better, to take the good in us and use it to overcome the bad, life takes on a brighter outlook, and we live with much more serenity and joy. The writer is the rabbi of the Western Wall and Holy Sites.