Portrait of an artist 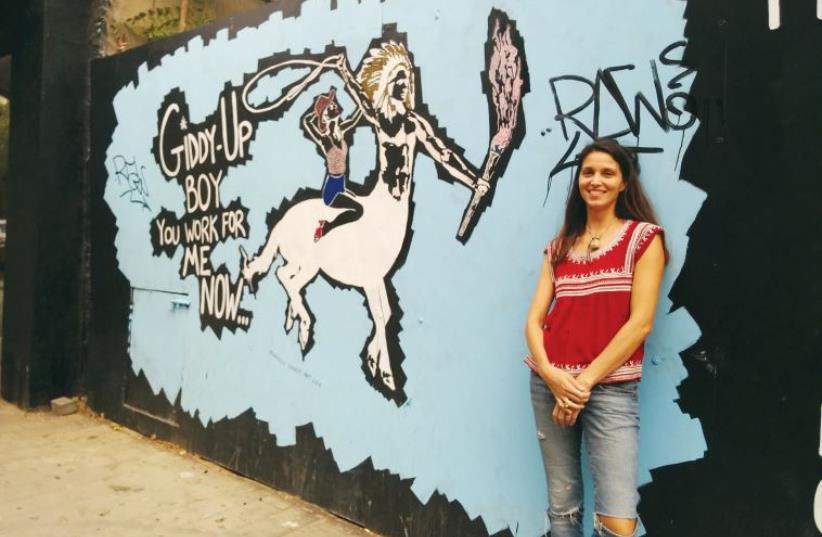 Murielle Cohen
(photo credit: ABIGAIL KLEIN LEICHMAN)
Advertisement
If the term “street artist” makes you imagine a shady dude defacing buildings with spray paint in the dark of night, you obviously have not met Murielle Cohen.A former model and actress raised in Montreal, Cohen is a bubbly young mother who executes her talents on the streets of Tel Aviv’s Florentin and Nahalat Binyamin neighborhoods while her three children are at school back home in Moshav Gea near Ashkelon.“I don’t like putting my art on my own walls or putting them in my closet.My motto is not to hold onto things, but to put them on the street where people can enjoy them,” says Cohen. Her work is so well known, and her friendly presence so appreciated, that she even gets commissions from shopkeepers and restaurateurs.“I love people and I love the interaction while I’m creating the art. But I don’t want to offend anybody, so I ask for permission from the owners – unless it’s a place where there is already a lot of street art or if it’s a public place. I like to feel free and work in the daylight hours without looking behind my back.I don’t want to work at night or feel like I’m doing something illegal.”Cohen also showcases the works of other Tel Aviv street artists in her unique gallery, Tiny Tiny Gallery, on Florentin Street. Opened in January 2013, Tiny Tiny Gallery was the first gallery in the neighborhood devoted exclusively to the up-and-coming genre of street art for which Florentin has become famous.Unlike traditional galleries, Tiny Tiny Gallery has no business hours. The sliver of exhibition space is lit up 24 hours a day for the enjoyment of passersby, with the works of one artist at a time on display without price tags. Sales are made mostly on opening night for each artist, when Cohen throws a street party in the small backyard of Tiny Tiny Gallery.In this backyard she also gives street-art workshops for kids age seven to 16 after taking them and their parents on a tour of neighborhood street art.Cohen found the empty little storefront while walking around Florentin with her husband, Elran Dekel, and a friend. There was a “For Rent” sign and a phone number.“I thought it was so cool and cute, so I called the guy and persuaded him to meet us the next week. We didn’t even know what we wanted it for, but when we met up with the landlord, on the spot I thought of the idea of a kind of communal collage of street artists. The fact that we would also have use of the backyard was a surprise to us,” she says.Romance at the Dead Sea Cohen’s career took her to some of the world’s most glamorous cities: Paris, Milan, London, New York. In Manhattan, she was working as an actress and renovated a 465-square-meter loft that she rented out for productions. “I was doing really well,” she says.In 2005, her doctor encouraged her to try the healing powers of the Dead Sea for her eczema.“On my first day at the Dead Sea, I met the father of my two boys, and – boom – it just changed my life,” Cohen recalls.She got pregnant, they got married, and she made aliya because she wanted her baby to be born in Israel.“I really love this land. It’s my home.It’s the only place in my life where I ever felt at home, ever. And I’ve lived in so many different places,” she says.A year after their son was born, the couple returned to Manhattan for a year and then came back to Israel, where their second son was born a few years later. The marriage broke up and they each found new partners, but live close to each other in neighboring moshavim.About three years ago, Cohen and Dekel had a daughter. They refurbished an apartment in Tel Aviv that was built by Dekel’s late grandfather, and rent it out through AirBnB as a five-star property.That same grandfather, Shlomo Israeli, inspired one of Cohen’s most unusual works. She found a trove of receipts from Israeli’s donations dated from the 1940s through 1980s – “beautiful old vintage documents” – and made them into a street collage in Jaffa.“We have to remember where we’re from and where we want to go,” she says. “I feel lucky to be living in a time when we’re allowed to live here in Israel, and I hope we will always live here.”Another unusual concept of Cohen’s is puzzle poems, where letters are hidden in faces. She has also done a series of dance images mounted in repurposed old window frames, a “Pinups” series and a new series she calls “Angels.”Her interest in visual art began a week after the September 11 attacks in 2001, when she bought charcoal and a sketchbook and started doing portraits for free on the streets of Manhattan.“I got so good that I could draw a 30-second portrait without looking at the page. I look into the eyes – the mirror of the soul – and that gives me all the information I need,” she says.“I drew more than 2,000 people.”Today, Cohen’s creations are sold online (muriellestreetart.com, www.telavivstreetart.com/) and are a point of interest for tourists in south Tel Aviv. Recently she ran across some visitors taking pictures of one of her artworks, and discovered that one of the women lives on the same Montreal street where she was brought up.“When you just talk to people, something amazing will always come out,” she says.