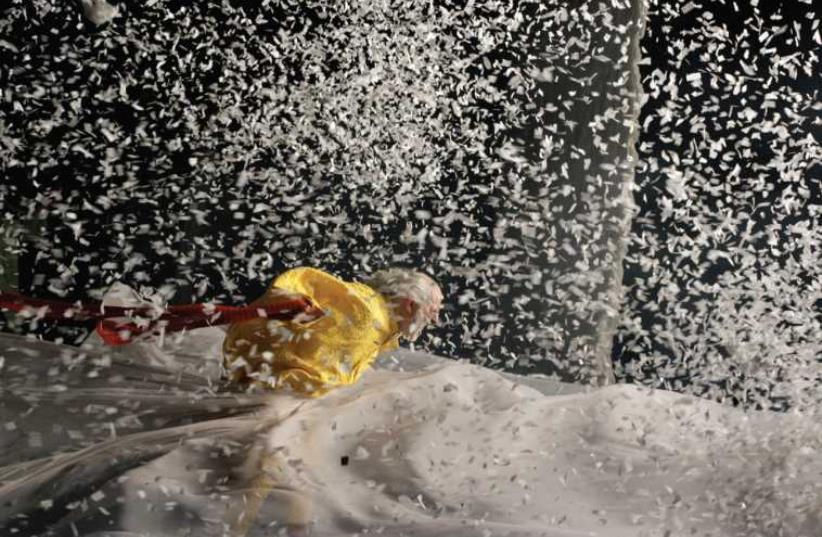 Slava’s Snowshow
(photo credit: PR)
Advertisement
The multi award-winning international sensation Slava’s Snowshow, which has delighted audiences in more than 80 cities around the globe, returns to Israel in June with performances in Tel Aviv, Jerusalem and Haifa.Born in a small town in the heart of Russia, Slava Polunin went to Leningrad (now Saint Petersburg) to study engineering, as that was what his mother wanted. However, without spending too much time on his technical studies, he quit the engineering-economic institute to become a clown.A year later Asisyai, a thoughtful, gentle, poetic character, a humorous and touching figure in a yellow boiler suit and red fluffy slippers, was born. The rest is history. Today, Polunin has been dubbed “the best clown in the world,” while his Snowshow is celebrated as “a theatre classic of the 20th century”, according to The Times of London.Polunin has brought his Snowshow to Israel more than once. Will he present the same piece again or does it change from year to year? “I have some 15 different shows that have been running for at least 10 years,” says Polunin in a phone conversation from his retreat near Paris. “That is because clowns are special people – they don’t even remember what they did yesterday.Our Snowshow, which is 20 years old, never stops surprising us. Before going on stage, I turn to my partners and say something like ‘Tonight we play Notre-Dame de Paris – that is, a drama’ or ‘We play Alice in Wonderland – that is, a complete absurdity.’ And each actor embarks on a new journey, changing his role accordingly.”During his career, Polunin has created about 40 shows, inaugurated the Academy of Fools school for clowns, founded and participated in many festivals and was recently appointed artistic director of the Circus of Saint Petersburg. Open to collaboration, he has created shows with iconic British director Terry Gilliam and violist Gidon Kremer. The former, Diabolo, populated with fantastic characters, had its world premiere in Tel Aviv some years ago.“Diabolo is just a circus accessory, but probably the title influenced the show and its mystic character because it has gone. But who knows? Maybe one day it will be back,” he says.“As for the show with Kremer, it is alive and kicking. We have 25 musicians on stage, together with actors, and you don’t know who is a clown and who isn’t. The show keeps running throughout Europe,” he says.Asked what kind of theater his is, Polunin replies, “Our clownery is not the vaudeville kind. By using circus language such as tricks, acrobatic vaults, etc., we create a captivating world that probably looks absurd to some people but is absolutely logical for madmen and little kids. I never reveal the entire story but invite people into my elusive world, where everybody can find something to identify with and find a story of his own.”