A Louisana Walmart store deems a Confederate flag cake to be offensive, but was ready to create a cake emblazoned with the extremist Islamic State flag. 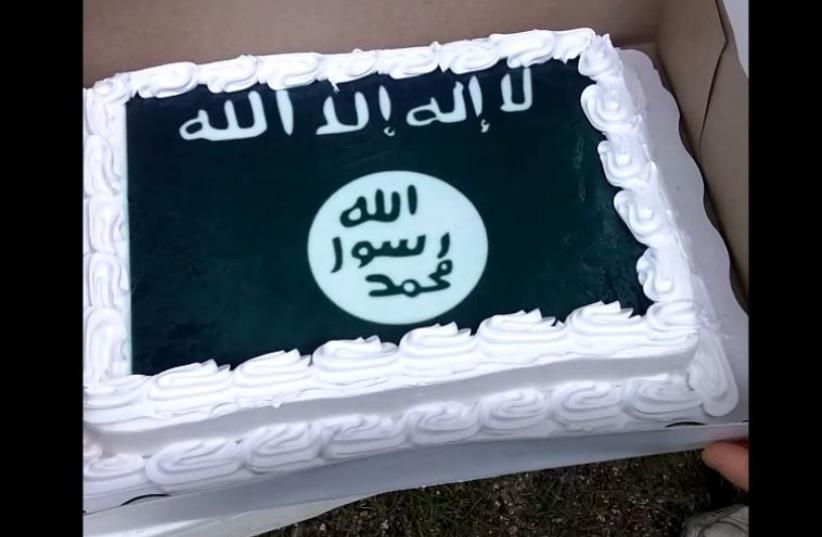 Walmart makes ISIS cake
(photo credit: screenshot)
Advertisement
Chuck Nethammer on Wednesday payed a visit to his local Walmart in Louisiana on Wednesday in hopes of ordering a Confederate flag cake imprinted with the words "Heritage not Hate." His request was subsequently denied. Irritated by this experience, Nethammer decided to test the retail giant and returned the next day to the Northshore Boulevard store's bakery counter to place an order for a cake emblazoned with the Islamic State flag. To his surprise, the store readily agreed, for the "rollback price" of $19.98 plus tax.  A frustrated Nethammer took to YouTube to share his frustrations, stating "Walmart, you got some explaining to do," he said while holding up his confederate flag.
Walmart makes ISIS cake, refused Confederate flag cake
"ISIS is killing our men and boys overseas and are beheading Christians," he continued, "but anyone can buy an ISIS battle flag cake but you can't buy a confederate flag toy like a Dukes of Hazards car," he said.   "Walmart, can you please explain how you are alienating southern Americans with this trash you allow to be sold in your store while at the same point confederate flag memorabilia is not allowed?" asked Nethammer. Randy Hargrove, a Walmart spokesperson sent a statement to The Daily Caller and insisted that the employees must not have understood what the ISIS flag print stood for because it should not have been accepted. “Our local store made a mistake. The cake in the video should not have been made and we apologize," read the statement.Regarding the refusal to make a Confederate flag cake, Hargrove explained that “we made the decision to stop selling Confederate-flag-related items promoting the flag’s image. For that reason we did not make the cake."