"No matter what just happened, we were involved somehow. We have a pretty big conspiracy budget."

By AMY SPIRO
JANUARY 2, 2018 14:02
The Mossad parody twitter account
(photo credit: TWITTER SCREENSHOT)
Advertisement
By day, Shawn Eni is a mild-mannered Canadian living in Modi’in and working in business software. By night, and also a little bit by day, he runs a Mossad parody account on Twitter that seems to regularly fool a whole lot of people.

The Palestinians have declared 3 days of rage as a result of US recognition of Jerusalem. We are still trying to determine how these 3 days will be different from the last century of perpetual pissed-offness.
— The Mossad (@TheMossadIL) December 6, 2017


Eni started the account as a joke, of course, in September 2016. He never really thought anybody would take it seriously – after all, he was poking fun not at the Mossad itself, but at those on Twitter who blamed Israel’s intelligence agency for all sorts of bizarre things.“People who are anti-Israel usually blame the Mossad for whatever,” said Eni in a phone interview on Monday. “Among them stealing shoes, and sharks and vultures.”So Eni started cracking jokes about the silly conspiracies and began to gain a loyal following.But he never imagined he’d reach where he is today - more than 46,000 followers, and a slew of interactions with prominent accounts who seem to think he really represents the Mossad.“I thought it would be an inside joke among the Israeli social media circle,” he said, “and then it really took off when I answered Linda Sarsour.”Sarsour, the well-known and controversial pro-Palestinian activist, tweeted in August: “I just lost all my text threads? I have an iPhone. Any idea why?” Eni’s account simply quoted Sarsour’s tweet and wrote: “Yes.” It remains one of the account’s most popular tweets to date, with more than 3,600 retweets and over 8,000 likes. 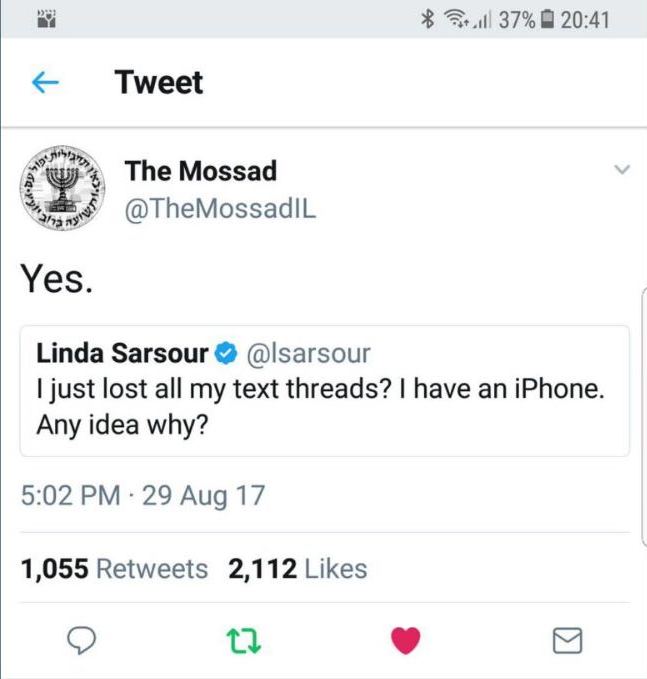 Twitter screenshot of interaction between Linda Sarsour and The Mossad.
Another popular posting was a photo of a North Korean military gathering, where the officers are heavily decked out in metal badges and pins of all kinds. “Deploy the giant magnet,” Eni tweeted.

While most people are in on the joke, there are always a few who take Eni a bit too seriously – including Hamas. The fake Mossad account tagged the terrorist group in a tweet last month, saying that rage in Gaza against US President Donald Trump was unlikely to end well for them.“It certainly didn’t end well for your heavily trained soldiers that were sitting ducks during your 2014 aggression,” Hamas replied.“It’s kind of a double blow because they make a fool of themselves and then social media responds: ‘Haha, you fell for it, you’re talking to a parody account.’” And nobody fell for it quite as spectacularly as Paul Nehlen, an extreme Republican figure from Wisconsin who wants to unseat US Speaker of the House Paul Ryan.Twitter watched in a mix of awe and horror last week as Nehlen went on a long antisemitic and white supremacist rant, accusing those who bashed him of being “shekels for hire.”A few people responded and tagged the parody Mossad account. Nehlen didn’t take it too well, posting: “Just want everyone to get a look at some of the tweets being sent to the Israeli Mossad @MossadIL by American citizens. I notice things @FBI.” CNN’s Jake Tapper kindly pointed out to Nehlen that “that’s not a legitimate Mossad account.”

And while Eni knows some people take him a bit too seriously, he’s still in it for the fun.“I hope it stays fun,” he said.“I think that’s what’s making it popular – it kind of spins everything in a positive note, even if it’s something horrible like nuclear war with North Korea.”