Thousands of Palestinians participate in pro-Hamas rallies across Gaza, call on groups to launch rocket attacks.

Hamas continued Thursday to issue threats to resume attacks on Israel unless its demands for a long-term cease-fire are met.The threats came as thousands of Palestinians participated in pro-Hamas rallies in the Gaza Strip.The rallies began after noon prayers when thousands of Palestinians took to the streets chanting slogans in support of Hamas. Carrying Hamas’s green flags, the demonstrators also called on the Palestinian groups to launch rockets at Tel Aviv.Hamas also called for similar rallies in the West Bank following Friday prayers. 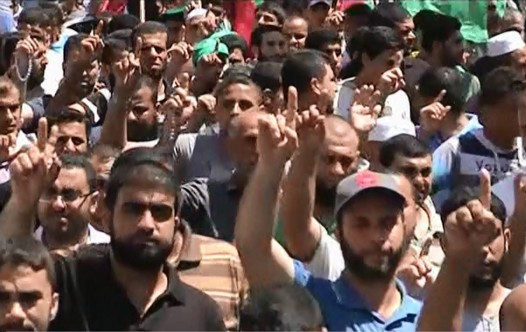 Hamas spokesman Mushir al-Masri said in a speech at one of the rallies that the Palestinian “resistance” groups lost only a small portion of their military arsenal during Operation Protection Edge.“The resistance will always be on the side of the people,” he said. “Our demands are just, legitimate and humane.”Hamas organized Thursday's rallies to express support for the Palestinian delegation to the cease-fire talks in Cairo.Al-Masri urged the Palestinian negotiators to stick to their demands.Addressing the delegation, he added: “You must know that the people, our people are great and firm in their steadfastness. Don’t return without having extracted our rights and demands.”The Hamas spokesman claimed that Israel has only one choice: to comply with the demands of the Palestinians.He said Israel would fail to achieve in the political arena what it failed to gain during the war. He also pointed out that the issue of disarming Hamas and other armed groups in the Gaza Strip was not discussed during the Cairo talks.“The weapons of the resistance are sacred and we won’t give them up,” al-Masri said. “The war has not ended and our fighters are still in the battlefield and their fingers are still on the trigger. Our rockets are also still directed toward Tel Aviv and Lod and beyond them. The tunnels are still alive and exist deep inside the Zionist entity.”Al-Masri advised tens of thousands of Israelis who left their homes in the South not to return unless Prime Minister Binyamin Netanyahu complied with all the demands of Hamas and other groups.
Advertisement
Subscribe for our daily newsletter