By BEN HARTMAN, JPOST.COM STAFF, NIV ELIS
JULY 20, 2014 17:37
Nahal Brigade soldiers carry Sgt. Eitan Barak, 20, to his resting place.
(photo credit: BEN HARTMAN)
Advertisement
Bar Rahav, 21, laid to rest in Kiryat TivonSec.-Lt. Bar Rahav, 21, was laid to rest on Sunday afternoon in Kiryat Tivon just east of Haifa, having fallen in battle during combat in Operation Protective Edge in Gaza.Rahav served in the Combat Engineering Corps and was mortally wounded on Saturday as a result of an anti-tank missile fired at an IDF vehicle close to Rafah at the southern end of the Gaza Strip.He was evacuated to Soroka University Medical Center in Beersheba but was pronounced dead shortly after arrival.Rahav lived in Ramat Yishai, close to Haifa, and was a member of the Hapoel Kiryat Tivon water polo team. 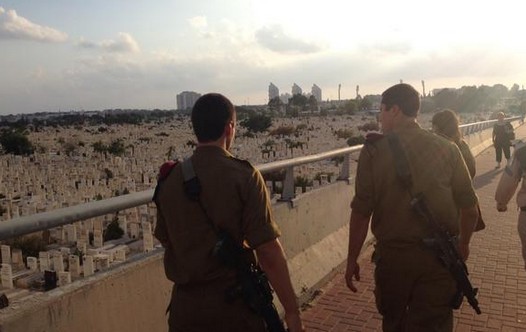 Holon native Bnaya Rubel: A ‘true patriot who loved his homelandThere are few sounds more heart-rending than that of a mother mourning the loss of her child.On Sunday Ada Rubel eulogized her youngest son, 20-year-old paratrooper St.- Sgt. Bnaya Rubel, as he was laid to rest at the Holon Military Cemetery. Rubel was killed in Gaza on Saturday during Operation Protective Edge.“There are no words to describe the loss we feel today,” she said. “We so waited for your return, and instead the messengers came.”A native of Holon, Rubel was active in the local dance troupe and music scene. Following in the footsteps of his brothers, he was determined to serve in a combat unit, and was thrilled when he was accepted to the paratroopers.At the funeral, they sorrowfully recalled their final visit to him on his base last week, the final hugs they shared, the sweet note of thanks he sent for the gifts and cheer they brought.On Thursday, he called his mother to tell her he would soon be going into Gaza, and to reassure her that he would be safe amid the forces. Just a few days later, a sea of soldiers carried his coffin to its final resting place. Their vocal “amens” overwhelmed the muffled Kaddish his family recited over the grave. 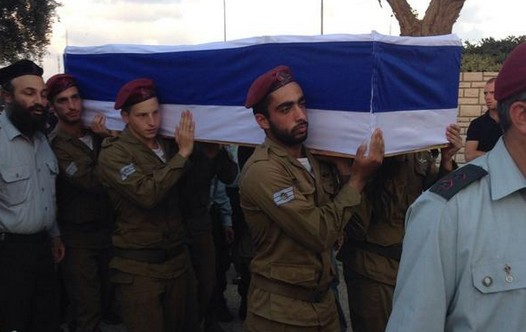 St.-Sgt. Eitan Barak remembered as ‘a beautiful, magical man’ by familySomewhere along the way, in the 20 years he lived, St.-Sgt. Eitan Barak went from being a rowdy, mischievous little boy to a loving brother and son, a top-notch cook, a brave and determined combat soldier and a man to admire.That was how his sister Noa described him at his funeral in Herzliya on Sunday, saying that in such a sad time she chose to focus on “optimistic, funny things, just like you would have wanted.”Barak was killed at around 3 a.m. on Friday morning, only a few hours after the ground operation in the Gaza Strip began. A fighter in the Nahal Brigade, he was killed in fighting with Hamas gunmen in north Gaza, and taken to Barzilai Hospital in Ashkelon, where he was pronounced dead. He was the first of the 18 IDF fatalities since the ground operation began on Thursday night.Among the hundreds of mourners at the military cemetery in Herzliya on Sunday afternoon were friends and loved ones, as well as his friends from the army. Before the ceremony started, a speaker took to the podium and gave instructions for what to do in case of a rocket siren, saying that the family members closest to the grave should lay down where they are, and those further out should get to cover if they were far enough back.Sgt. Adar Barsano, 20, from NahariyaSgt. Adar Barsano, 20, from Nahariya was killed in action on Saturday when his patrol unit encountered a Hamas terrorist cell that had infiltrated into Israel close to the Gaza border.The Hamas operatives, who entered Israeli territory via a tunnel from Gaza and who were ostensibly intent on perpetrating a terrorist attack or abduction, opened fire killing Barsano and Maj. (res.) Amotz Greenberg.The patrol was not the intended target, and it most likely prevented a serious terrorist incident.A friend of Barsano, Bar Schaps, told Channel 2 news that he was “a warrior and died as a warrior.”