By REUTERS
AUGUST 3, 2014 10:04
Anti-Israel demonstration in Washington DC.
(photo credit: screenshot)
Advertisement
Thousands of people attended a demonstration outside the White House in Washington DC on Saturday to protest against US support for Israel and call for an end to military action in the Gaza strip.Demonstrators, who carried Palestinian flags and chanted "Free, free Palestine" while holding up signs bearing slogans including "Stop Genocide" and "Free Gaza", called on the administration of US President Barack Obama to end military aid for Israel."They just feed them money, that's all they do. Feed Israel money, feed Israel weapons, and nothing happens, I mean, and they won't stop it. They are bombing Palestinians and they are killing them and they still don't want stop funding a war," said one protester."It's completely one-sided, and you've got to understand that the Israelis, they have a lobby that's the most powerful lobby in the world, and that's what keeps the politicians in business here," said another. 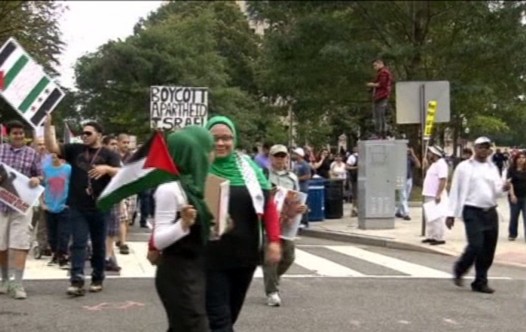 Crowds swelled after the protest moved into downtown areas of the city. One of the demonstrators called for the United States to review its relationship with Israel."I know we have a complicated relationship with Israel and I think this is a moment in history when we need to change that relationship. My reason for being here today is that my tax dollar is paying for 1,600 people dead in Gaza today, many of whom civilians, many of whom are children. And I regret that my tax dollar is paying for them," he said.Also on Saturday, Israeli Prime Minister Benjamin Netanyahu said his country would continue operations in Gaza until calm is restored, however long it takes.