WATCH: IDF use of precision missiles as fighting rages on 4th day of ground op'

The IDF and Israeli intelligence assets continue to battle Hamas from the air, land and sea as casualties mount for both sides in heavy fighting.

By JPOST.COM STAFF
JULY 21, 2014 15:23
IDF extracts wounded soldiers from Gaza
(photo credit: REUTERS)
Advertisement
As the IDF's ground incursion entered it's fourth day of operations, the IDF continued to target Hamas both in Gaza and in an attempted infiltration into Israel. 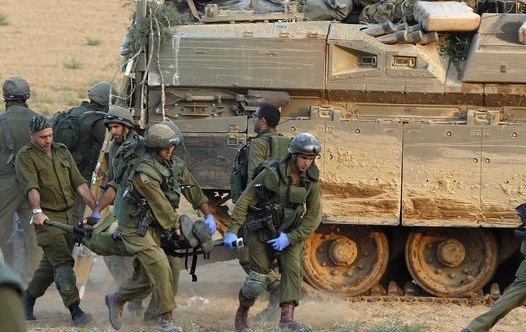 On Monday the IDF released footage of a precision cruise missile killing a Hamas operative after intelligence surveillance was able to follow the operative's movements in a building. The missile was launched by an Israeli Navy vessel. Earlier on Monday, Shin Bet alerted the IDF to an imminent infiltration by Gaza based terrorists. On Monday morning, two terrorist cells entered Israel from northern Gaza via a smuggling tunnel. Ten of the terrorists were struck from the air and killed.
Advertisement
Subscribe for our daily newsletter