A direct, strategic response to BDS

As The Alternative BDS campaign shows, our organization stands ready to take action against those who seek to undermine Israel’s fine achievements. 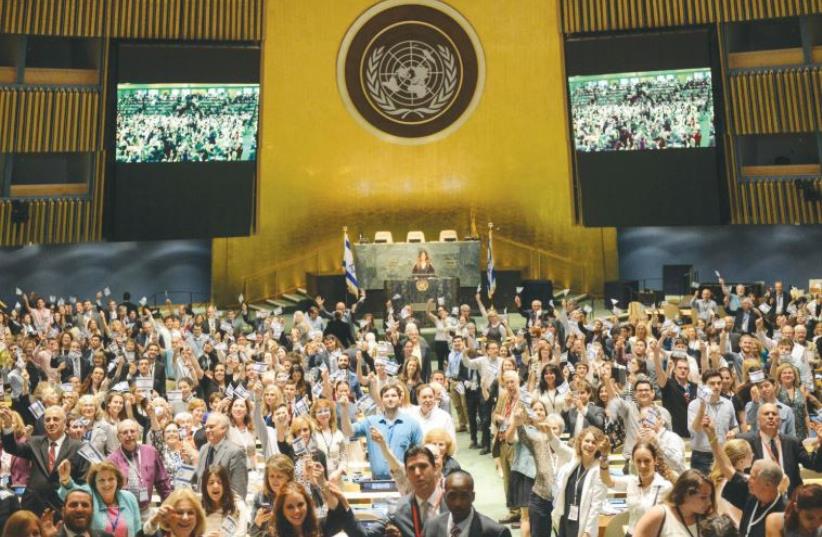 PARTICIPANTS POSE for a photo at the anti-BDS conference held at the UN General Assembly yesterday.
(photo credit: SHAHAR AZRAN)
Advertisement
With increasing frequency, the Boycott, Divestment and Sanctions (BDS) movement and its supporters are attempting to foment intense anti-Israel activity on college campuses.This activity is characterized by hostile demonstrations, angry protests and the shouting down of Israeli and pro-Israel speakers.While these tactics might be the ones that grab headlines, the broader and arguably more damaging goal of the BDS movement is to delegitimize and decrease the amount of foreign investment in Israel.But on both fronts, the BDS movement is by and large failing.Despite strenuous efforts and misplaced boasting, its activism has had an insignificant impact on Israel’s economy. Companies looking to connect with the Jewish state are smart enough to realize that BDS propaganda is rooted in distortions and disinformation, while Israel, with its creative thinking and entrepreneurial spirit, represents an exceptional business opportunity.BDS supporters can feign success in deterring investments in Israel, but a more accurate assessment can be found in a Bloomberg News article posted on June 2. The headline, “Israel Boycott Is Failing When Measured by Main Economic Gauge,” says it all.More revealing, and in direct contradiction to the BDS movement’s claims, is this excerpt: “Signs [are] that an international movement to isolate Israel is gaining ground. Yet an examination of foreign capital flow into the country shows the opposite trend – a steep increase [italics added]. Foreign investments in Israeli assets hit a record high last year of $285.12 billion, a near-tripling from 2005, when the so-called Boycott, Divestment and Sanctions movement was started by a group of Palestinians.”Frustrated by their failure to damage Israel’s economy in any kind of meaningful way, BDS proponents have intensified their efforts on college campuses, particularly with strident demands for divestment.While it is true that combating anti-Israel activity on campus in all its manifestations can be problematic, standing up to divestment is an entirely different issue.At Israel Bonds, we have taken a firm, resolute stand against calls for divestment on college campuses and elsewhere. We were proud to participate in the largest anti-BDS gathering ever, held last month at the United Nations, and were honored to share the pen New York Gov. Andrew Cuomo used to sign his executive action against the BDS movement in order to endorse a symbolic check we presented to the Israeli consul general, Ambassador Ido Aharoni.Now, we’re taking it a step farther.Our organization has launched a new campaign: The Alternative BDS – Bonds Donated to Schools.The Alternative BDS asks friends of Israel to fight BDS on campus by making donations of Israel Bonds to their school of choice, whether it be their alma mater or an institution being attended by a family member. Because the university must hold the bonds until maturity, this precludes divestment by binding the school to Israel for a sustained period of time.Moreover, donating Israel Bonds to universities counters BDS on two levels: It is a personal means of rejecting anti-Israel activism on campus and, because proceeds from the bonds help build every sector of Israel’s economy, it is a direct repudiation of the movement’s goal of damaging the country financially.As an organization, we take pride in the fact that BDS agitators have had no impact whatsoever on the sales of Israel Bonds, whether it be from our loyal retail clients or institutional investors, including states, financial institutions, insurance companies and more.Indeed, even though BDS activity has steadily increased, our organization exceeded over $1b. in annual US sales in each of the past three years. With nearly $700 million in 2016 domestic sales to date, we are on course for another exceptional year.The significantly higher rates of sale in recent years clearly show that many of our clients view acquiring Israel Bonds – a direct investment in Israel’s economy – as a pointed and strategic means of saying “no” to the BDS movement.Israel Bonds was founded 65 years ago to develop Israel’s economy.Today, we take pride in the fact that it has proven to be among the most resilient in the world. As The Alternative BDS campaign shows, our organization stands ready to take action against those who seek to undermine one of Israel’s finest achievements – the building of a strong and durable economy.The writer is president and CEO of Israel Bonds.