The bottom line is that little is known about Barkat’s policy preferences on national issues. 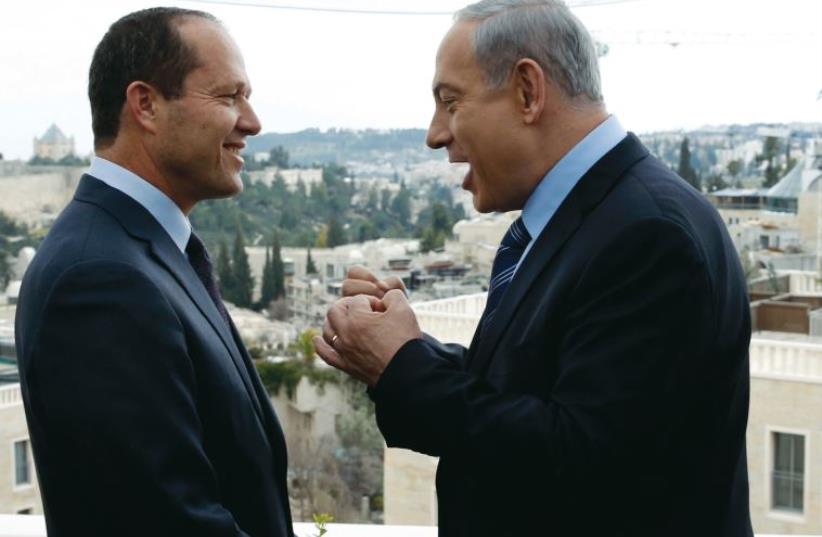 Netanyahu and Barkat
(photo credit: REUTERS)
Advertisement
Nir Barkat, the popular mayor of Jerusalem, announced that he was j joining the Likud Party, a move interpreted by many as a step toward an eventual run for the job of prime minister.Many commentators responded immediately by giving their opinion on the move.However, Barkat has yet to reveal any of his positions on the national agenda.While many might find that he has been a good mayor, how can one support or oppose him without knowing what his plan for the country would be? What are the values that would guide him in making decisions? Israeli politics has been moving, in the past few decades, from a system based on competing ideologies defined by competing parties to one based on a competition of brands, embodied by various personalities.If there was once a clear difference between the socialist Labor Party and the liberal Likud, these differences have been blurred with time. If the utopian peace process of Labor was once opposed to the realist security approach of the Likud, both parties now try to speak in each other’s language.Instead of having a battle of ideologies, we have various personalities battling one another without ever really describing what their ideology is. The question, then, in elections is not “what do you believe in?” but “who do you like better?” It is telling that as Barkat now enters the Likud, no one is actually asking if his ideology is compatible with the party that is based on Ze’ev Jabotinsky’s Revisionist thought, a well-defined, rightwing ideology.This basic question is of critical importance in order to decide whether Barkat’s move is a positive stepping-stone from an ambitious politician or a negative move by someone incompatible with the Likud, who is trying to use the Likud as a vessel for his own personal advancement.

The ideology of the Likud While it would be presumptuous to claim to be able to set out a unifying ideology that unites all members of the Likud, or any other political party, it is clear that there are some guidelines that set out what the Likud stands for.The party defines itself as “liberal and nationalist,” two words that carry a very clear policy preference on various issues.For example, on foreign policy, the Likud is a realist party. Jabotinsky’s famous “Iron Wall” essay, written before the establishment of the State of Israel and calling for a strong hand to uproot the ambitions that Palestinian Arabs had to kick the Jews out of the Land of Israel, is still a guiding document for the senior echelons of the party. The Likud’s charter officially rejects land concessions, and the Likud has traditionally opposed the two-state solution.On economics, the Likud is free-market oriented. The Likud believes in a liberal economy, in the European sense, and was historically the antithesis of the Labor Party, which promoted a socialist economy.Barkat has yet to reveal his agenda on national issues, and therefore, when trying to define his ideology, we are left only with his record as mayor. This leaves us confused and makes it almost impossible to decide whether his ideology is compatible with the Likud’s platform.

What does Barkat believe in when it comes to foreign policy? On the one hand, he is completely opposed to the division of Jerusalem. He has stood up against the destruction of Jewish homes in east Jerusalem, even standing up against the powerful legal adviser to the municipality. However, he was also the manager of the campaign of the Kadima political party in Jerusalem. This was right after the disengagement, which he reportedly supported.

Does Barkat support the two-state solution? Does he oppose it? No one knows. Cynics would say that this inconsistent history means that he might look at the polls before making any decision on this issue.What does Barkat believe in when it comes to economics? On the one hand, he is a successful hi-tech entrepreneur, who benefited from the free market.One would expect him to believe in a competitive free market. However, as mayor, he ran things in a very centralized way. He defined projects and invested a lot of public funds in them, even if they were the type of projects usually to be left with the free market.Was this done because he is a socialist who believes in an interventionist government, or was it done because of the truly complex nature of Jerusalem, which might warrant a more interventionist approach? It is unclear.Should Likud members welcome Barkat? The bottom line is that little is known about Barkat’s policy preferences on national issues. Therefore, when people come out for him or against him so early after his joining the party, they are supporting or opposing nothing more than an empty vessel, a brand, with very little substance in it.It is unfortunate that people are already speaking of Barkat as a candidate for prime minister, when he has never filled any role on the national level. A more prudent approach would be to first ask him to serve as a member of Knesset, then as a minister, and only then seek the highest office. After all, he himself said many times that the secret to his success as mayor of Jerusalem was that he lost his first election, which forced him to sit in the opposition and learn the ins and outs of Jerusalem politics.It should be noted that Barkat himself has never spoken about seeking the job of prime minister.However, even if he does skip steps along the way, if Barkat wants to receive the support of Likud members, he needs to clearly outline his policy preferences and explain what his values are. Then, Likud members will be able to decide whether his worldview fits the Likud or not. ■ The writer is an attorney and a former legislative adviser to the Knesset’s coalition chairman. He previously served in a legal capacity at the Foreign Ministry. He is a graduate of McGill University Law School and Hebrew University’s master’s program in public policy.
Advertisement
Subscribe for our daily newsletter