A response to Jan van Mil

You feel uncomfortable living in a society that defines itself as Jewish and you want us to forgo that definition so you can pretend that you actually live in some other kind of place. 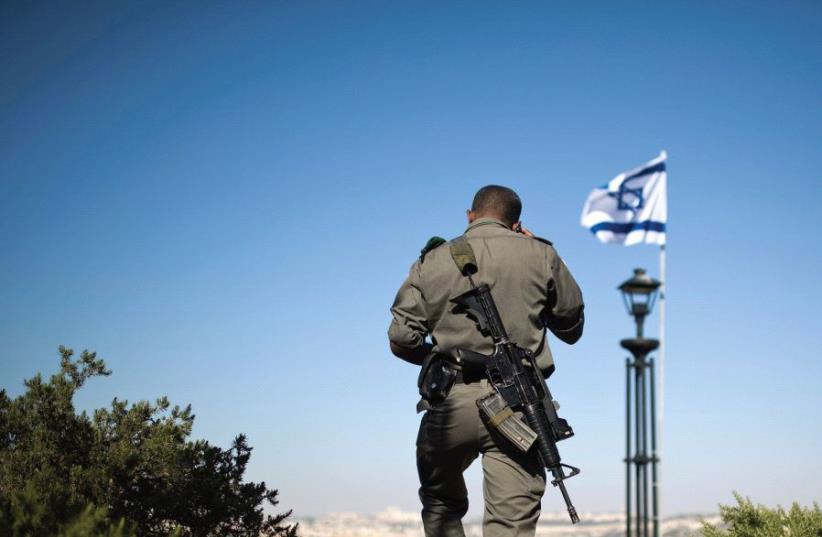 ‘THE PALESTINIAN refusal to recognize Israel as the nation-state of the Jewish people is Netanyahu’s powerful explanation why no compromise with the Palestinians is possible
(photo credit: REUTERS)
Advertisement
In “A Jewish Nation or a Democratic State?” (August 16), you write, “The Nation-State Law leaves no doubt or uncertainty: Israel is the home of the Jews and all others will be tolerated at best. Equal rights and all, of course, but do not feel too at home, if you are not Jewish, this is not your home.” I’m sorry you feel the way you do and I think you misinterpret the meaning of the “Nation-State Law.” But as one of its earliest supporters, I am not going to apologize for it, since I am convinced that it is both necessary and just.You were born in Holland, married someone with an Israeli passport, and live in Israel. By our rules, your marriage to one of us entitles you to join our community. For all the years you have lived here and regarded Israel as your home, you seem to have labored under the misimpression that you haven’t been living in the home of the Jews. Now you have suddenly “discovered” that fact. Are you, a man with a home, a family, a passport and an entry in the registry of voters, any more of a guest or any less of a guest than you were a month ago? What is there about being domiciled in the home of the Jews that so unsettles you? You argue, “The Jews have to come to the understanding that the Zionist idea has sprouted the kind of situations the Jews were trying to escape from.” You’re profoundly mistaken, particularly regarding the kind of situation Jews were trying to escape to. You seem to assume that a nation-state is inherently something fascist and oppressive. It can be, but it just as easily can not be. Not in contemporary France or Germany or Britain or the United States. Or Israel. While Jews sought, initially, to escape from injustice that denied their rights even while some of their host nations paid lip service to them (Nazi Germany, the Soviet Union and the Arab countries didn’t even pay lip service), Zionism never defined itself simply as an escape from others’ injustice. If Europe and Arab civilization were unjust to the Jews, we wanted a place of our own, where we could defend ourselves against others’ injustice, but more importantly, live as a national community according to our own view of justice. What that means in your case you have experienced yourself, long before the Nation-State Law was made law. Perhaps you thought that you belonged to fictional ethnic group called “Israelis” who are defined not by a common history, culture, language and religion but by a document stamped in a government office. If so, the passage of the Nation-State Law has disabused you of this notion. I regret your discomfort upon losing this illusion but, really, we Jews aren’t obligated to perpetuate it, for your sake or for anyone else’s. The Nation-State Law simply reflects the truth. I think you are being unjustly selfish. You live among us and yet you want to deny us the right to define our community and our state as we see fit, even though that self-definition costs you nothing in terms of your rights and privileges. You feel uncomfortable living in a society that defines itself as Jewish and you want us to forgo that definition so you can pretend that you actually live in some other kind of place. You want to feel at home by denying us the right to define our home. One thing you haven’t neglected to pick up during your life in Israel is chutzpa.The Nation-State Law was passed now because there are some people in this country and many outside of it who consider the idea of a Jewish state an anathema. They dream of doing away with it, and the passage of the Nation-State Law reflects the Jews’ determination to insist that we deserve our own national homeland by right and will not let anyone take it away from us. For those who wish to eliminate the Jewish state, the Nation-State Law is indeed a gauntlet thrown down in challenge. For you – well, it depends on your attitude. If, after living in this country for many years, you decide you can’t abide living in a Jewish state, then the gauntlet is thrown down to you, too. But you don’t need to adopt that attitude and I hope you don’t. Do you find objectionable the idea that Zionism is just and the Jews have the right to self-determination in their own land and nation-state? If you don’t, than you shouldn’t have any problem with your place in our community. It hasn’t changed; we’ve just become clearer about it.