A peace settlement with the Palestinians will probably keep eluding us as the stalemate limps on, with no reason to change. 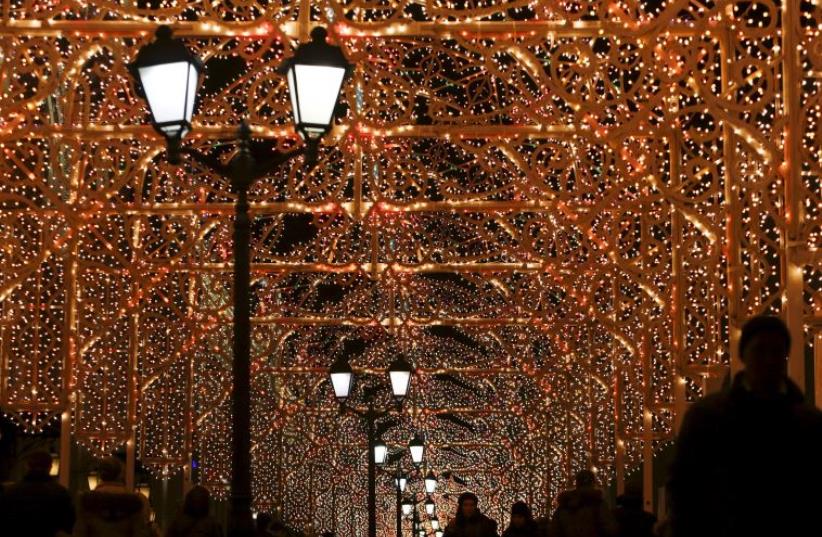 People walk along a street decorated with festive illumination lights, part of the New Year and Christmas holidays celebration, in central Moscow, Russia, December 21, 2015.
(photo credit: REUTERS)
Advertisement
The beginning of a new year is a good time to consider how things are going and to speculate how they might turn out. As with most years, opinions are divided; but certain trends seem sure to continue.A peace settlement with the Palestinians will probably keep eluding us as the stalemate limps on, with no reason to change. This impasse includes the ongoing tide of terrorism (“wave of terrorism” is so 2015). Thus the only democracy in the Middle East will march or stumble on, while keeping a wary eye on our notoriously bad neighborhood.This is neither good nor bad news; it is not news.At a time when the IDF has announced it is taking measures to beef up the northern border in anticipation of a possible encounter with Islamic State forces, Iraqi forces have scored a significant victory over the terrorist group by recapturing Ramadi. ISIS is in retreat on several fronts, but it still viciously dangerous. This is partially good news.The bad news is that there are ongoing trends that indicate less, rather than more happiness in the Middle East. According to Aaron David Miller of the Woodrow Wilson International Center for Scholars in Washington, these are threats to state authority, the emergence of new transnational and local actors, and the rising influence of Iran and Russia.The turmoil in the Arab world continues with warfare in Yemen, Libya and Syria, while Iraq dissolves in sectarian strife. The Saudis are insecurely monitoring falling oil prices, rising deficits, and an ascendant Iran. Egypt lives under military rule, but for how long? The problem, as Miller states, is that “Not a single Arab state has leaders who can rise above their narrow ethnic or sectarian affiliations or individual interests to think of the nation as a whole. Nor does any have institutions that are representative, inclusive and reflect the public’s will.”Stir into the pot what he describes as “transnational and local actors” – in other words, terrorists. Islamic State’s millennialist pursuit of a caliphate has driven it to capture vast swaths of territory, leaving behind it a trail of beheadings, hostage taking, and torture. ISIS’s gains in Iraq have been reversed, but its gangs of terrorists have swept into Libya, Yemen, and now Sinai – not to mention France.Al-Qaida is trying for a comeback in Afghanistan, while in Yemen, al-Qaida affiliates pose a serious terrorist threat.Miller’s comment on the Palestinian conflict is brief: “In the putative state of Palestine, Hamas rules alone in Gaza, effectively dividing the Palestinian national movement and making statehood impossible.”The Syrian conflict continues to drag on, as Russia and Iran vie for ascendance in the leadership vacuum left by the United States. President Vladimir Putin is emerging as a key player, along with Iran, whether in the resolution of Syria’s civil war or its perpetuation.Nevertheless, at such a time of external strife, we would do well to pause and consider some of the positive trends that our Start-Up Nation can expect in the coming year.ISRAEL21c asked experts for recommendations in the fields of technology, health and the environment for 2016.Jonathan Medved, CEO of OurCrowd, predicts there will be more investment in Israeli technology companies, especially Asian and private-equity investments.“2016 will be the year that when you thought it couldn’t get better, it got a lot better,” says Medved. He adds that there will be more crowdfunding platforms and the public will get more involved in investing.In the health field, Dr. Shai Melcer, executive director of BioJerusalem, says Israeli medical technology will focus on medical devices and biotechnology for cancer, brain conditions, diabetes, cardio, vision and asthma. “The US is looking to Israel for salvation in digital health. There’s no doubt that we have what it takes to mark the main targets,” says Melcer.In the environmental field, Jack Levy, founding partner of Israel Cleantech Ventures, says there will be more investment in sustainable agriculture, including bio-ag and precision- ag technologies. Hardware and software systems are being developed that will help farmers improve crop yield by understanding the status of their soil in real-time.Not surprisingly amid the turmoil in the region, Israel is becoming known as a safe place to visit. According to Pini Shani, of the Tourism Ministry’s marketing department, tourism to Israel will grow in 2016. “The game has changed,” says Shani. “Two years ago, if I said Paris was not safe you would have laughed at me.”